At least nine people were killed, Prime Minister Shinzo Abe said. Officials said at least 366 were injured, five of them seriously, and about 30 people were unaccounted for after the magnitude 6.7 earthquake jolted residents from their beds at 3:08 a.m.

Nearly 3 million households were left without power by the quake — the latest in an exhausting run of natural disasters for Japan.

It paralyzed normal business on the island, as blackouts cut off water to homes, immobilized trains and airports, causing hundreds of flight cancellations, and shut down phone systems.

In the town of Atsuma, where entire hillsides collapsed, rescuers used small backhoes and shovels to search for survivors under the tons of earth that tumbled down steep mountainsides, burying houses and farm buildings below. The area’s deep green hills were marred by reddish-brown gashes where the soil tore loose under the violent tremors.

“We will carry on searching for them,” he said.

Miyasaka said the town had emergency meals for up to 2,000 people and that more than 500 had sought refuge in its emergency shelters.

The landslides ripped through some homes and buried others. Some residents described awakening to find their next-door neighbors gone. 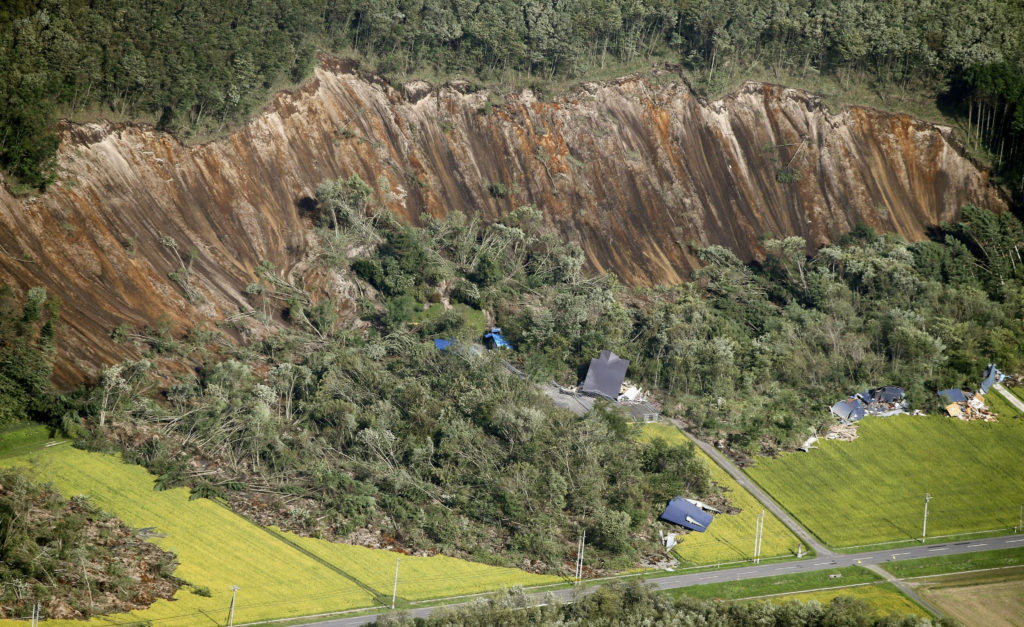 A landslide wiped out several houses in Atsuma town in Japan’s northern island of Hokkaido on Sept. 6. The earthquake also knocked out power to about 5 million residents. Photo by Kyodo/via Reuters

The island’s only nuclear power plant, which was offline for routine safety checks, temporarily switched to a backup generator to keep its spent fuel cool. Nuclear regulators said there was no sign of abnormal radiation — a concern after a massive quake and tsunami in March 2011 that hit northeast Japan destroyed both external and backup power to the Fukushima Dai-ichi nuclear plant, causing meltdowns.

Japan’s Meteorological Agency said the quake’s epicenter was 40 kilometers (24 miles) deep. But it still wreaked havoc across much of the relatively sparsely inhabited island.

Many roads were closed and some were impassable. NHK showed workers rushing to clean up shattered glass and reinstall ceiling panels that had fallen in the region’s biggest airport at Chitose.

Japan is used to dealing with disasters, but the last few months have brought a string of calamities. The quake came on the heels of a typhoon that lifted heavy trucks off their wheels and triggered major flooding in western Japan, leaving the main airport near Osaka and Kobe closed after a tanker rammed a bridge connecting the facility to the mainland. The summer also brought devastating floods and landslides from torrential rains in Hiroshima and deadly hot temperatures across the country.

Prime Minister Shinzo Abe said that up to 25,000 troops and other personnel would be dispatched to Hokkaido to help with rescue operations.

Japan is used to dealing with disasters, but the last few months have brought a string of calamities.

As Japan’s northern frontier and a major farming region with rugged mountain ranges and vast forests, Hokkaido is an area accustomed to coping with long winters, isolation and other hardships. But the blackouts brought on by the quake underscored the country’s heavy reliance on vulnerable power systems: without electricity, water was cut to many homes, train lines were idled and phone systems out of order.

In the prefectural capital of Sapporo, a city of 1.9 million, the quake ruptured roads and knocked houses askew. A mudslide left several cars half buried. By evening the city’s streets were dark and shops closed.

Economy, Trade and Industry Minister Hiroshige Seko told reporters that the extensive power outage was caused by an emergency shutdown of the main thermal power plant at Tomato-Atsuma that supplies half of Hokkaido’s electricity.

The hope had been to get power back up within hours and some electricity was gradually being restored. However, damage to generators at the plant meant that a full restoration of power could take more than a week, Seko said.

Utilities were starting up several other thermal and hydroelectric plants and power was restored to 340,000 households, but even with those stopgap supplies thousands will still be without electricity for some time.

Authorities sent power generator vehicles to hospitals and other locations and water tanker trucks to communities in Sapporo, where residents were collecting bottles to tide them over until electricity and tap water supplies come back online. Long lines of people waited to charge their cellphones at the city’s regional government office.

The quake’s impact was widespread. To the north, in the scenic town of Biei, residents lined up outside of supermarkets and convenience stores, quickly clearing shelves of water, toilet paper and food.

“Only a few cartons of instant ramen were left,” said Mika Takeda, who lives in the town of 10,000. The one local gas station was limiting customers to only 20 liters (5 gallons) of gas, she said.

Left: Rescue workers search for survivors from a house damaged by a landslide caused by an earthquake in Atsuma town, Hokkaido, Japan on Sept. 6. Photo by Kyodo/via Reuters