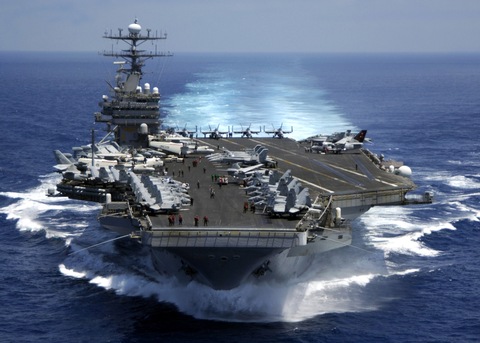 The body of Osama Bin Laden was released from the aircraft carrier USS Carl Vinson, pictured above. Photo by U.S. Navy

Osama bin Laden’s body now lies somewhere in the North Arabian Sea, a watery grave that some experts argue does not adhere to Islamic custom, as the White House has asserted.

Scholars say they have been swamped with inquiries on the issue since the administration’s announcement.

“The disposal of — the burial of bin Laden’s remains was done in strict conformance with Islamic precepts and practices,” John Brennan, the administration’s top counterterrorism adviser said Monday.”We early on made provisions for that type of burial, and we wanted to make sure that it was going to be done, again, in strict conformance. So it was taken care of in the appropriate way.”

Bin Laden’s body was washed and placed in a white sheet. It was then placed in a weighted bag and some religious remarks were made by a military officer before it was released into the sea, reports the Associated Press. Several Islam experts told the NewsHour that burial at sea is only considered when no other option is available.

“The burial violated the principles of Sharia, especially because his body was on land and deliberately moved to sea,” Wael Hallaq, a professor of Islamic law at Columbia University wrote in an email. “Burial at sea is permitted only when death occurs while at sea and there is no possibility for burial on land.”

The situation with Bin Laden’s body was complicated by the fact that he was essentially a stateless person, without citizenship rights in a particular country and no state would have likely claimed his body said Ebrahim Moosa, a professor of religion and Islamic studies at Duke University.

“It was unusual, and not in keeping with tradition, and the option that this was chosen was largely for political reasons,” he said. “But he was an extraordinary figure who had offended people in much more grievous ways … I don’t think that too many Muslims would be upset by the burial process.”

Burial in accordance with Islamic tradition usually involves washing of the body, performing special prayers before and after burial, and placing the body in the ground, wrapped in a shroud with the head pointed towards Mecca.

After death, a body is supposed to be buried as soon as possible, said Mohammad Faghfoory, a professorial lecturer of religion in Islamic studies at George Washington University, which the U.S. military did follow by performing a burial within 24 hours.

Burial rites are important in Islam, as in many cultures, and even the least observant Muslim will usually leave a will with strict instructions for his or her burial, he said. But Faghfoory emphasized that adaptations have been made over the years. For example, Muslims in western countries may have to adhere to local regulations for burials.

“Because the law is flexible it is open to interpretation, so people are saying this was an emergency and special circumstance,” he said of the Bin Laden burial.

While details of the events are still emerging, Moosa said the crucial factor will be if there was any desecration or mutilation of the body prior to the burial.

“The key question here is human dignity,” he said. “Even a criminal man, a global outlaw and mass murderer, does deserve dignity that the body is entitled.”

Find full coverage of the death of bin Laden.