The winning bid for the prized but threatened species at the predawn auction Saturday was more than double the 2013 annual New Year auction.

It was paid by Kiyomura Corp., whose owner, Kiyoshi Kimura, runs the Sushi Zanmai chain. Kimura has often won the annual auction in the past.

Japanese broadcaster NHK showed a beaming Kimura saying that he was surprised by the high price of tuna this year. But he added, “The quality of the tuna I bought is the best.” 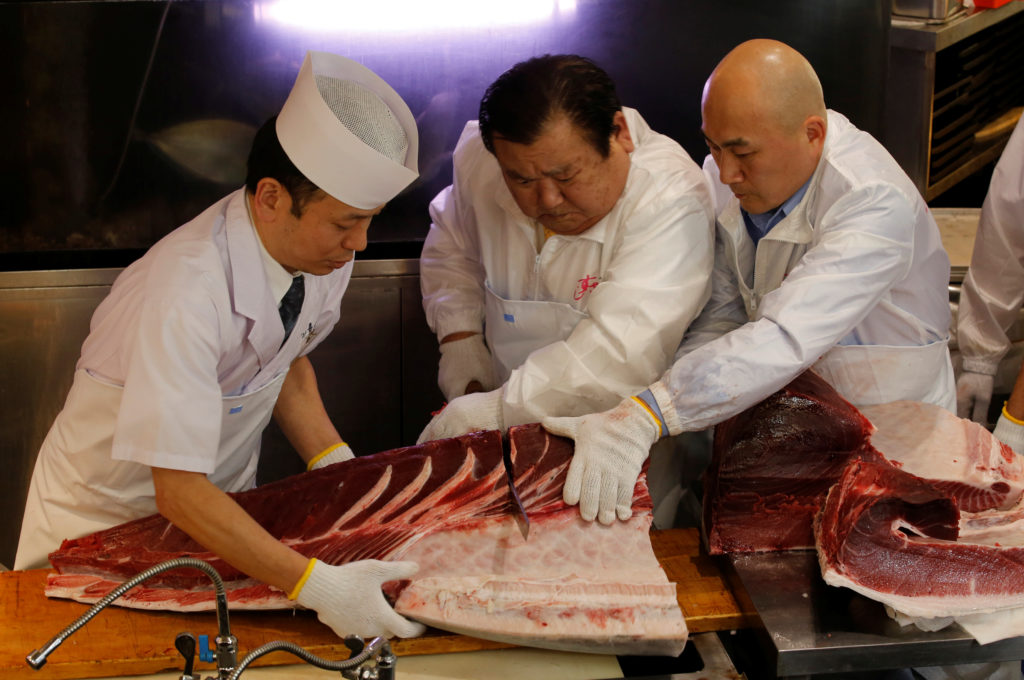 The auction prices are way above usual for bluefin tuna. The fish normally sells for up to $40 a pound ($88 a kilogram), but the price rises to over $200 a pound near the year’s end, especially for prized catches from Oma in northern Japan.

Last year’s auction was the last at Tsukiji before the market shifted to a new facility on a former gas plant site on Tokyo Bay. The move was delayed repeatedly due to concerns over soil contamination. 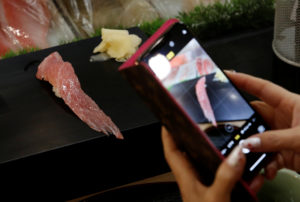 A customer takes pictures of a sushi roll made with meat from a 278kg bluefin tuna, priced with a 333,600,000 yen bid at the Toyosu fish market’s first tuna auction this year, at Sushi Zanmai restaurant in Tokyo, Japan, January 5, 2019. Photo By Kim Kyung-Hoon/Reuters

Japanese are the biggest consumers of the torpedo-shaped bluefin tuna, and surging consumption here and overseas has led to overfishing of the species. Experts warn it faces possible extinction, with stocks of Pacific bluefin depleted by 96 percent from their pre-industrial levels.

There are signs of progress toward protecting the bluefin, and Japan and other governments have backed plans to rebuild Pacific bluefin stocks, with a target of 20 percent of historic levels by 2034.

Decades-old Tsukiji was one of Japan’s most popular tourist destinations as well as the world’s biggest fish market. The new market opened in October. A few businesses stayed in Tsukiji, but nearly all of the 500-plus wholesalers and other businesses shifted to Toyosu.

Tsukiji is due to be redeveloped, though for now it’s being turned into a parking lot for the 2020 Tokyo Olympics.