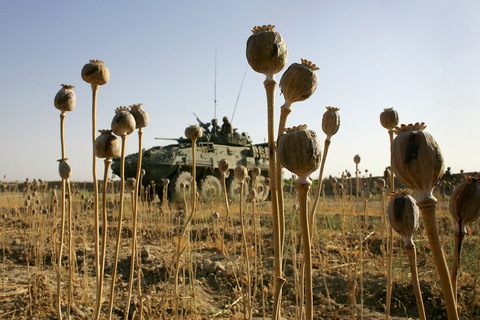 On Thursday’s NewsHour, we feature an excerpt of the film “Raw Opium,” which documents the illicit global trade of the raw material for heroin. It’s part of our series in partnership with The Economist magazine showcasing the art of filmmaking.

“Raw Opium” was directed by filmmaker Peter Findlay and produced and co-written by Robert Lang of Kensington Communications. Findlay has spent the past decade working in independent documentary production after working for 10 years at Canadian Public Broadcasting. Findlay is a graduate of Columbia University’s Graduate School of Journalism and now focuses on making films that speak to the human condition in the age of globalization.

Here’s what Lang told us about the making of “Raw Opium”:

In 2008, Scott Calbeck (“Raw Opium”‘s researcher / associate producer) approached me with an idea for a film focusing on Afghanistan’s illicit opium production and the varied efforts to curb its trade. With further research, that seemed too limited a perspective and we decided on a more ambitious film, which would investigate a major global commodity and how it plays such a powerful role in the lives of people around the world.

Opium is paradoxically a ‘gift of the gods’ and a scourge of history, a life saver and a life destroyer. As the raw material for heroin, it has for decades fueled a vast criminal trade larger than the economies of many countries, despite massive international efforts to put a clamp on it. To understand all the human drama circling about the opium poppy, we met with opium growers in Afghanistan and India, heroin users in North American and European cities, enforcement officers around the world, health care workers treating drug users and a number of historians and experts on drug policy. Director Peter Findlay and I were surprised to find that almost none of them believe that the long-standing punitive policies against growers and drug users have been working. Most are convinced the status quo is counterproductive, far too costly, and doomed to fail as long as there is such a high demand for drugs around the world.

Despite the failure of the old methods, new harm reduction and legislative approaches are often met with determined opposition, even if they have proven successful. We filmed two of these initiatives for “Raw Opium”: In Vancouver, a clinic which has successfully practiced harm reduction for nearly ten years, has been taken to court by the Conservative government which wants to shut it down; in Portugal, a bold experiment which decriminalized all drug use ten years ago resulted in decreased deaths among drug users and lower incidence of drug use among youth, and the country did not — as many assumed it would — become a narco-tourist state.

It took over a year to find the varied stories that make up the finished film. In the end, each person featured in “Raw Opium” gave us generous access to their corners of the opium pipeline and shared with us their experiences and first-hand observations, without which the film would not have been as credible and rich. Our documentary emerged out of the desire to try and piece together some of the social, political and historical realities at the heart of this complex matter. In its short life so far, it’s gratifying to see it become part of a growing debate over effective drug policy, at home and on the international front.

Ultimately, “Raw Opium” was conceived to investigate our assumptions about drug use, addiction and the U.S.-led War on Drugs, while inviting our audience to think about other ways of tackling a persistent global problem.

“Raw Opium” is screening at select theaters and festivals in the United States and Canada. To check screening dates, please visit www.rawopium.com.