In India, is web censorship justified in the name of national security?

Software engineer Ashwath Akirekadu can’t tell you how many times he’s logged onto GitHub over the last 15 years, but he vividly recalls the one time he couldn’t.

Earlier this month while on vacation to visit family in Bangalore, India, Akirekadu tried to help a local friend who wanted to develop a mobile application. Just as he would have done if he were back at work in San Francisco, Akirekadu turned to GitHub, a collaborative, code-sharing hub used by millions of computer, Internet and data professionals around the world. But this time on Jan. 6, he got an error message.

“It was as though there’s no website called GitHub.com that existed,” he said.

Akirekadu wasn’t the only person who had trouble accessing the website. In what the government says is an effort to thwart terrorist groups from recruiting new members and distributing anti-India content on the Internet, the Indian government recently blocked GitHub, the Internet Archive, Vimeo, Pastebin and dozens of other websites from users within that country.

The sites have since been restored, but following President Barack Obama’s visit with Prime Minister Narendra Modi in India and the two nations’ strategic defense partnerships forged this week, questions remain about how India, the world’s largest democracy, balances the tension between free speech and national security. How effective is this method in stemming terror attacks? Did India do the right thing?

Critics call this latest move censorship and an affront to freedom of expression, and found it particularly offensive because websites were not given prior notification. Blocks were conducted secretly, leaving users to wonder what happened.

The Indian government maintains that this is not censorship. Instead, India considers these steps necessary to prevent websites from “carrying the ISIS related Jehadi [sic] material inviting youth to join ISIS and promoting their policies,” according to a statement from Gulshan Rai, director general of India’s Computer Emergency Response Team, which monitors cybersecurity issues.

Rai emailed the NewsHour on Jan. 19, saying that the ban was lifted on all of the affected sites in early January:

All the websites were unblocked and all the websites are accessable [sic] to general public for more than ten days now. The Internet penetration in India is growing and the government does not believe in blocking of the websites. In today’s world, there cannot be censorship on the websites. However, in these circumstances and situation and reaction regarding ISI [sic] activities in the world, this unfortunate decision was taken in complying the orders of the Court.

About 15 percent of all Indians had Internet access in 2013, according to the International Telecommunications Union in Geneva, Switzerland. In other words, 189 million people used the Internet, equal to about half of the population of the United States. And that number is growing dramatically each year. 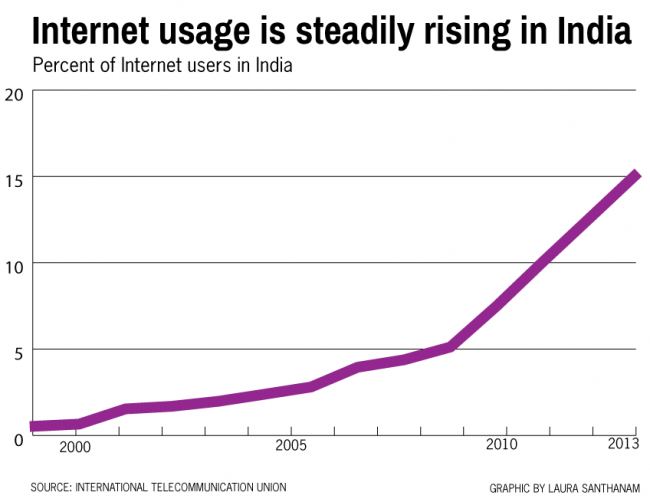 But blocking websites to protect national security is ineffective, said Richard Rossow, senior fellow and Wadhwani Chair in U.S.-India Policy Studies at the Center for Strategic and International Studies in Washington, D.C. This is especially true given how low Internet penetration remains in India, who is logging onto the Internet and who remains most likely to succumb to the temptation of joining a terrorist group, Rossow said.

“Closing the Internet is an imprecise measure,” Rossow said. “It just can’t be a hugely effective tool for broad campaigns across the country. If you’re targeting disaffected groups, the poor, it doesn’t really hit them as well. Maybe it has some impact around the edges, but I can’t believe this is going to play a major role in trying to blunt any group trying to incite negative activities by another group.”

When the Indian government blocks websites, it is bound by law to do so in secret. In fact, websites such as Vimeo and GitHub both confirmed in written statements that they received no prior notification that their websites carried any questionable material before the government blocked them from users in the country. A GitHub spokesperson said the organization only found out about the ban in mid-December when “we began receiving intermittent reports from users in India that they were unable to reach github.com.”

When they pressed the Indian government for a response, they received an official press release on Dec. 31 saying that the ban had been lifted. Nearly two weeks passed before the government restored access to all of the banned websites.

Rai with India’s Computer Emergency Response Team said the government “made serious efforts to issue the notices to these 32 websites. However, most of the websites did not have the contact points posted on their websites at that time.”

The NewsHour was able to contact and receive response within 24 hours of using email addresses listed publicly for Vimeo and GitHub.

One aspect of these blocks that some critics find particularly problematic is the scope. If a website carries a single piece of content that the government finds questionable, the entire website can be blocked, says Pranesh Prakash, policy director for the Centre for Internet and Society, a Bangalore-based organization that studies policy issues of freedom of expression, privacy and openness.

More broadly, India’s actions jeopardize free speech on the Internet, according to civil liberties advocates. The country’s blocks also fall in line with recent global trends in Internet governance, explained Cynthia Wong, senior researcher for Internet and human rights at Human Rights Watch. She maintains that portions of India’s Information Technology Act are “very untransparent” and enable the government to act with virtually no real way for people to appeal these bans.

“It’s hard to say whether this censorship would protect national security or address legitimate threats,” Wong said. “The onus is really on the government to demonstrate that wholesale blocking would address significant threats. Because there’s no real due process, it leaves far too much discretion to government officials and leaves way too much room for abuse.”

According to Wong, this is nothing new. Worldwide, many democracies, including India, are stepping up their use of website blocking and filtering to prevent people from accessing information that these respective governments deem inappropriate, and “that really does present human rights problems,” Wong explained.

India may be particularly sensitive to this method of Internet monitoring, which could be compared to fishing with dynamite. The country’s information technology industry is one of the most competitive in the world. Its relative industry share of the nation’s gross domestic product amounts to more than 8 percent, according to the National Association of Software and Services Companies in India.

This perhaps explains why India is one of the top five global markets in terms of active users of GitHub, a source-code management website, along with China, the United States, Germany and the United Kingdom.

It also underscores why software engineer Ashwath Akirekadu was initially baffled when he was blocked from using GitHub. According to Akirekadu, his friend just wanted to develop a mobile app and could have saved him hours, if not days, of work with the help of open-source code available on GitHub.

When Akirekadu realized that the Indian government, and not some technical error, stood between him and this code, he was disappointed in the country that he originally called home.

“It didn’t seem very democratic, and India is suppose to be the world’s biggest democracy,” Akirekadu said. “It sounded more like the kind of thing that would happen in a country run by dictators, where there’s no true democracy.”

Left: India recently blocked 32 websites from users within the country in what the government officials call efforts to prevent terrorist groups from recruiting new members. Civil liberties advocates, however, say this action amounted to censorship and infringed upon freedom of expression in the world's largest democracy. Photo by Bloomberg/Getty Images.