Column: How my reporting trip to Ethiopia came to an abrupt end

We came to Ethiopia to report on the country’s response to a historic drought. We left with a very different story and a taste of how hard it is for journalists, even those covering what should have been a mostly positive story.

For years, Ethiopia has struggled to shed its association with vast human suffering earned during the epic famine three decades ago.

Gleaming high rises in the capital, Addis Ababa, are testament to what today is one of Africa’s most robust economies. An infrastructure building boom has connected the farthest reaches of this sprawling nation of 100 million people, many of them now covered by a government social safety net.

As a result, even though Ethiopia’s current drought has been far more severe than that in the ‘80s — one-fifth of its population suffers moderate to severe food insecurity — there’s very little of the classic, horrible imagery: the emaciated faces of children with distended bellies, which became the backdrop of those historic famine relief rock concerts.

More hours went by before we finally got our “hearing” before five unidentified men. … Each of us was interviewed separately about exactly what our story was, why we chose to go where we did.

We went to Ethiopia to tell this new story, that drought does not have to lead to famine. Many experts say planning and good governance can greatly mitigate human suffering. Ethiopia’s government has won some kudos for its drought response this time, yet its abysmal record on human rights, its harsh treatment of journalists and political dissidents can hijack attempts to tell this story. And in our case, it did just that.

For foreign correspondents, obtaining a journalist visa requires extensive paperwork, documenting the serial numbers of all equipment down to cell phones, a detailed account of every place to be visited and, once approved — if approved — stern warnings not to deviate from it.

The treatment of Ethiopian journalists is far harsher: some 60 of them have fled into exile since 2010, according to the international group Human Rights Watch.

The morning after we arrived in Addis, armed with all required permits and paperwork, we set off for the Oromia region south of the capital, shooting images of the extensive housing and road projects under construction or newly completed, some images of farmland and finally a small farm whose owners were being trained in business skills while cultivating new specialty crops to help cope with climate vagaries.

It was here where we were summoned by Ethiopia’s “security services” to the police station. It is amusing to reflect now that our first reaction was annoyance: this would rob videographer Tom Adair of the afternoon’s best light. If only that was all we would lose.

About two hours into our wait in a dimly lit office, we were told to surrender all electronic equipment, including cell phones, and our passports. No explanation was offered, only the threat of arrest if we continued to insist, as we did, that our paperwork was in order, that it is illegal to confiscate a passport, especially without a receipt.

“Report to Immigration tomorrow, and you can collect it,” we were instructed by a plainclothesman who never introduced himself. That meant a six-hour journey back to the capital and to a building teeming with Ethiopians and foreigners alike, applying for passports or visas. In our case, our chance to get our equipment and documents returned.

More hours went by before we finally got our “hearing” before five unidentified men. They’d combed through every corner of our luggage in pursuit of hidden cameras or memory cards and demanded to see every inch of footage we’d shot. Each of us was interviewed separately about exactly what our story was, why we chose to go where we did. 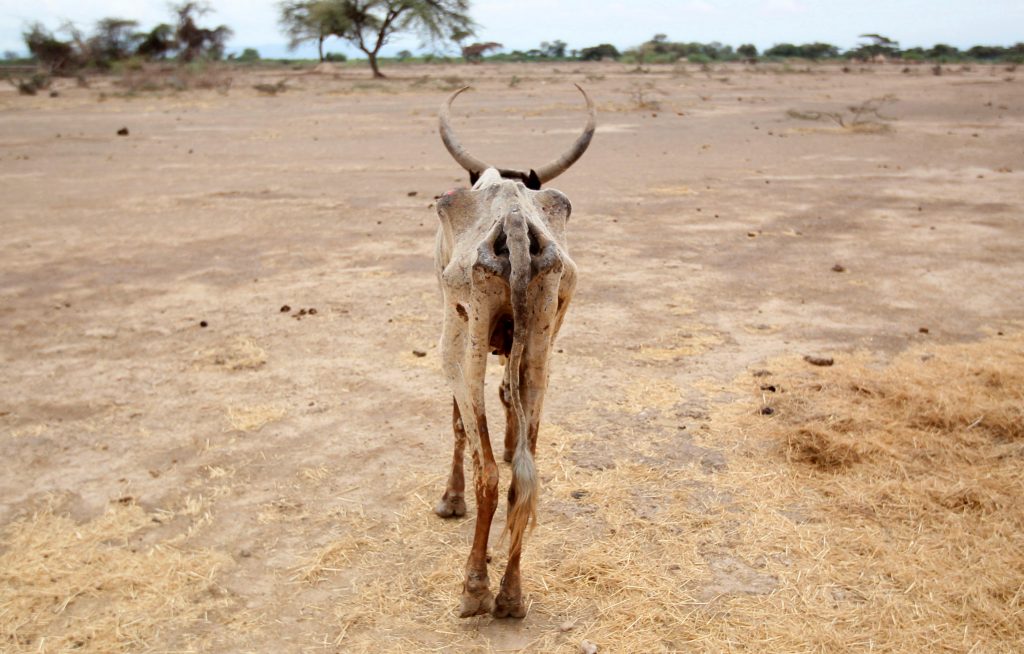 An emaciated cow walks through a dry field in the Oromia region of Ethiopia. Photo by Tiksa Negeri/Reuters

Our explanation was simple: Oromia was hard-hit by the drought. It is where we planned to film food distribution and other retraining programs run by the government and by Baltimore-based Catholic Relief Services, the largest nongovernment aid group operating in Ethiopia. A CRS official accompanying us was also detained through this ordeal. This was mystifying since his agency, far from being subversive, is a key government partner in relief work.

As it turns out, Oromia is also one of several regions that have seen political unrest and protests — unrelated to the drought — which the government has put down violently. In the days just before we arrived, Human Rights Watch reported 100 deaths at the hands of riot police in the Oromia region.

It’s fair to assume that the security services were looking for footage or evidence of any encounters we might have had with protests or protesters, highly improbable given that we’d barely arrived in the country. A glance in our passports could attest to that.

Finally, 24 hours after they were taken, our passports and gear were returned with the only “official” explanation we would get.

“You did not get permission from Security,” we were advised, even though no such requirement is published anywhere.

Oromia was now off limits and interviews already scheduled with government ministers about the drought were now canceled.

In Ethiopia, “Security,” the National Intelligence Service, appears to hold the biggest sway, enforcers for a government hell bent on controlling the flow of public information and the images it sends out to the world.

Internet service was shut down throughout the country in the period just before we arrived, presumably to muzzle social media and to prevent protest images from being exported, a virtually impossible task in this day and age. Nevertheless, footage of the protests were broadcast and distributed.

Given that weeks of careful planning (to say nothing of the hefty travel costs) were wiped out by the whims of a paranoid security apparatus, it’s unlikely we’ll be able to return and tell this important story any time soon.

Left: Women wait to receive food at a distribution center in Gelcha village, one of the drought stricken areas of the Oromia region in Ethiopia, on April 28. Photo by Tiksa Negeri/Reuters