Column: How an uplifting story about refugees in Sardinia quickly unraveled

Eighteen months into Europe’s migrant crisis, it’s become something of a challenge to find stories that shed a new or unusual light on this historic movement of people.

My interest was piqued a couple of months back by an item on ANSA, the respected Italian News Agency, about some derelict land on the Italian island of Sardinia that had been handed over to a group of 50 African farmers so they could become independent of government assistance, and learn new techniques that they could take back home, should conditions ever permit.

My Rome-based colleague Alessandra Maggiorani phoned the main spokesman for the African cooperative, a Senegalese man called Cheikh Diankha, and everything seemed to stand up; filming the project sounded very straightforward.

We were just waiting for an opportunity to put it in the can.

And that turned out to be on a trip to Italy earlier this month, where our main aim was to shoot a feature about how 80 percent of Nigerian women who make it across the Mediterranean are forced into prostitution. The Sardinia farm story would be the second of our assignment.

We were on a train heading for Milan Central Station when Alessandra called Diankha to confirm we were on our way. She told him we wanted to shoot some scenes at dawn on Friday, Sept. 2. He said Friday morning would be impossible because the farmers were doing something else but assured us that filming toward dusk on Friday and over the weekend would be achievable.

So we boarded a flight to the Northern Sardinian town of Alghero, confident that we would soon have a fairly simple and possibly uplifting story in the bag.

We couldn’t have been more wrong.

The assignment turned out to be one of the most opaque of my professional life.

More than 10 days after we landed in Sardinia, I’m still not sure what the true story is.

What I am certain of though, is that somehow we kicked a hornet’s nest and in the process got an interesting look at the underbelly of a country that’s struggling to cope with the impact of mass migration as well as some of the people who’re making money out of it.

If Cheikh Diankha had just fobbed us off and had told us he couldn’t help, we’d have perhaps shrugged our shoulders and not traveled to Sardinia.

Somehow we kicked a hornet’s nest and in the process got an interesting look at the underbelly of a country that’s struggling to cope with the impact of mass migration.

But he stopped taking our calls when we got there, as did a man called Luca Pintus, who was named as the owner of the land given to the African farmers.

So we started digging into the project and its main partners.

On the days we visited the land in Platamona, in Northern Sardinia, there was nobody working. Workers in neighboring vineyards had seen and heard nothing. And they had a clear view of the land. One of them was a policeman who passed the entrance every single day.

The consistent theme of these conversations was that Sardinian agriculture was struggling and many farmers were wary of migrants taking over their jobs by undercutting wages. So any Africans in the fields would have raised eyebrows, if not more.

Cheikh Diankha ran a refugee center, and seemed to be the go-to man on Sardinia in terms of migrant issues. He was linked to a number of integration initiatives including teaching newcomers the Italian language.

Luca Pintus’ reputation on the island was not particularly savory. We consulted senior police officers, neighbors, old family employees, council officials and other institutions. The least-worst character assessment was offered by a farmer. He described Pintus as the black sheep of a wealthy family who was always trying to make a fast buck.

We tracked down Pintus to his mother’s cafe in the main square of Sassari, a Northern Sardinian town. He put aside his plate of lasagna and assured us that the project was aboveboard; we could see all the paperwork, and he would arrange a facility with a talented migrant fashion designer who had allegedly attracted the attention of Giorgio Armani. When his mother was out of earshot, he gave us another phone number that we could use to contact him. He didn’t want his mother to hear the number and check up on him. 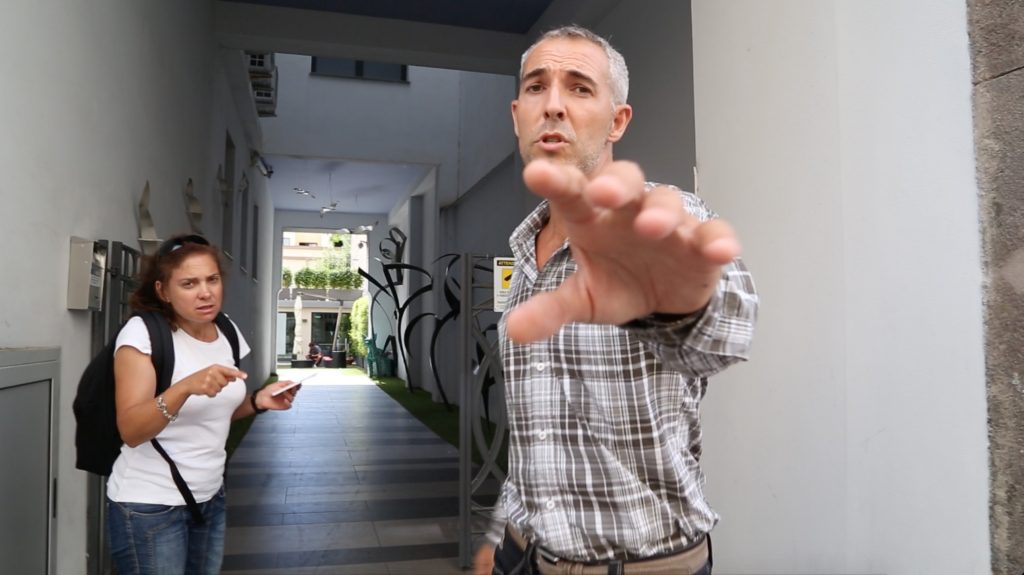 On Monday, Sept. 5, we went to an address in a trendy building not far from the cafe, to a meeting that Pintus had set up. He was supposed to be there, along with the migrant designer, and a fellow director of Cheikh Diankha’s company. When we got there, the only person present was Diankha’s colleague, Giovanni Rossi, who described himself as an accountant. To cut a long story short, he didn’t want to do a televised interview. We did. And he took a swing at my camera, while failing to answer questions about whether the African farmers existed.

During our earlier conversation, Pintus had named the local farmers union, the Coldiretti, and a psychologist as having supported the farmers project.

We talked to a senior Coldiretti official who said they were approached informally, and liked the idea as it would provide food for local schools and markets. But they were not presented with any documents and they did not become involved. 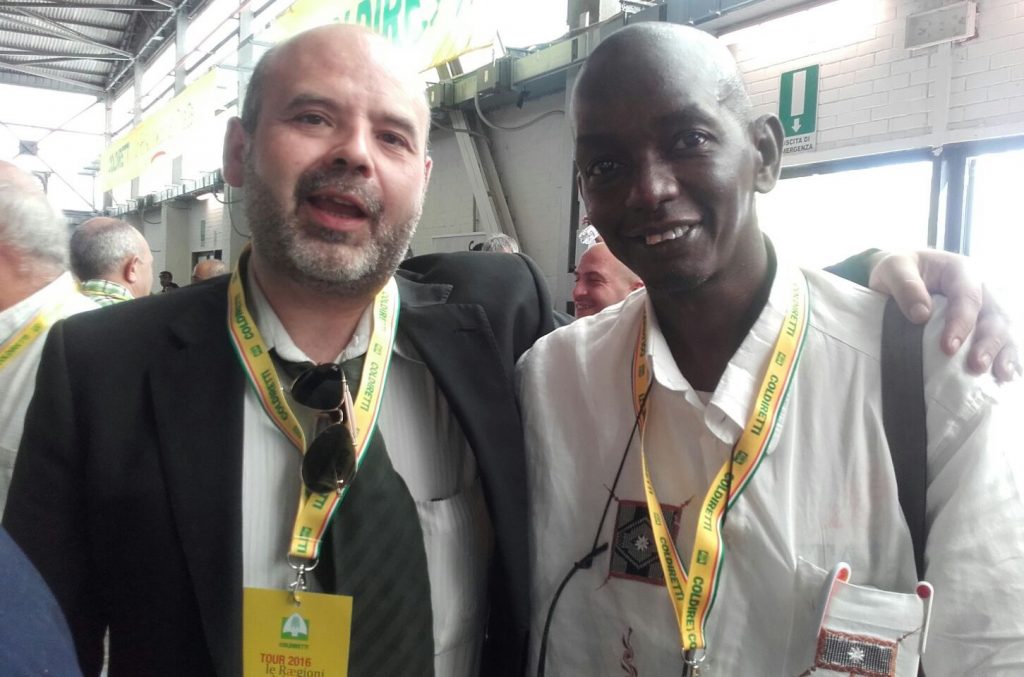 Pintus sent us some photos showing him and Diankha at a Coldiretti event. The farmers’ association moved very quickly to distance itself from the project once we started asking questions.

As for the psychologist, she was named as a supporting professional in a scheme for Alzheimer’s patients that was closed down because of deception and physical abuse.

So was this farmer’s scheme a case of fraud?

We don’t know, because we never managed to discover which authority had approved it. Despite Pintus’ promises, the paperwork was never forthcoming.

We went to see Cheikh Diankha at his office in a former disco once known as the “Kiss Kiss,” which in its earlier days was closed down in a prostitution racket.

The Kiss Kiss is now a reception center, holding about 100 mainly African migrants.

To say that Diankha was surprised to see us would be an understatement. And he started shaking like a leaf when I asked if the farmers’ project was a scam.

His answers and those of Luca Pintus were inconsistent. Diankha claimed the cooperative had not started work. Yet, there had been a report on local television. Also, he insisted, they had yet to receive a penny. Pintus claimed the last time his land had farmers on it was 15 days previously.

Diankha ushered us out of the Kiss Kiss, saying I shouldn’t even think about filming. 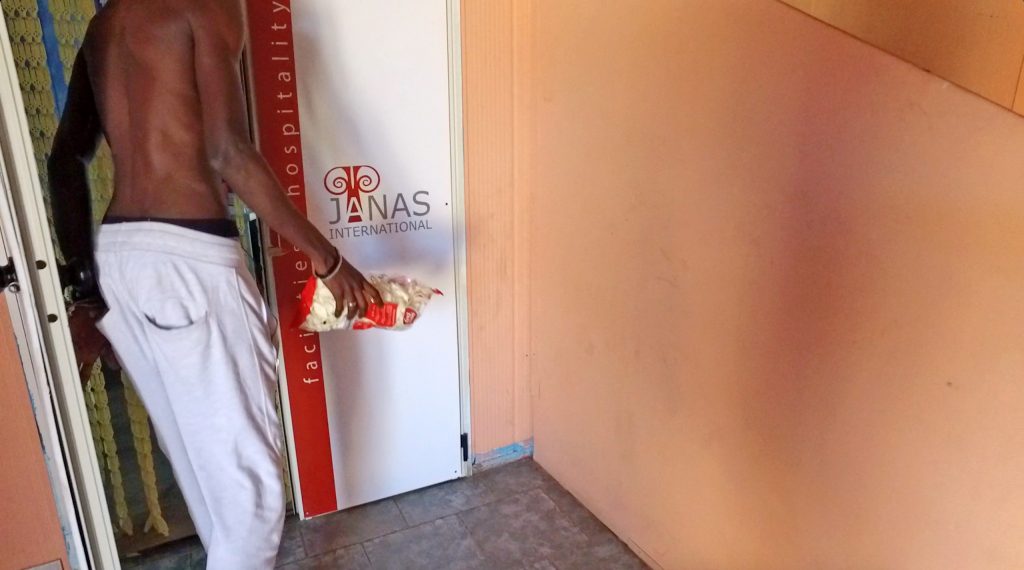 The company Janas International has a “reception center” to house refugees. Image by Malcolm Brabant

Like other businesses running reception centers, his company, Janas International, which specializes in “facilities and hospitality,” receives about 32 euros or $36 a day per migrant. The money is supposed to pay for food and clothing. The potential daily income for his company at the Kiss Kiss is $3,600 a day. In a year, that’s about $1.3 million.

Pintus, ever talkative, told us that Diankha and Giovanni Rossi were planning to open up another reception center.

So what were they all trying to hide, if anything?

I’m truly puzzled. But surely it had nothing to do with concerns from local residents that the center was being used as a base for prostitution?

There are literally hundreds of millions of dollars in public funds being thrown at the migrant crisis and the opportunities for fraud are enormous.

It’s entirely possible that some of the migrants living in the center are among the 80 percent of Nigerian women who make it to Italy and are forced into the sex trade to pay for their crossing.

That doesn’t mean that Diankha and his hospitality company are involved. But he and his partner are certainly profiting from the migrant crisis. There are literally hundreds of millions of dollars in public funds being thrown at the migrant crisis and the opportunities for fraud are enormous.

In June, we reported from Sicily that the Italian Finance Police had cracked a massive fraud by the Mafia in which migrant reception centers were used as a vehicle to defraud the state of billions.

The European Union is so concerned about its coffers being emptied by criminals, that it’s set up a special task force in conjunction with the Italian state. We know from our inquiries that several institutions in Sardinia are now examining the activities of the gentlemen we encountered.

But this being Italy, I can’t tell you anything official.

Left: A field on the Italian island of Sardinia is purported to be a farm worked by migrants. Image by Malcolm Brabant

Malcolm Brabant is a special correspondent for the PBS NewsHour.