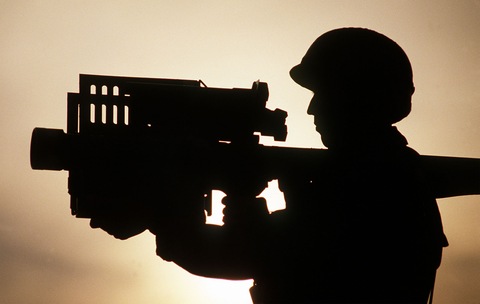 A member of the 8th Security Police Squadron is silhouetted against the sky as he holds a Stinger anti-aircraft guided missile. Photo by USAF.

With the Syrian civil war seemingly locked in stalemate as the violence enters its 20th month, a number of opposition advocates in the United States have been calling on Washington to arm rebels with weapons in order to make a decisive blow against Bashar al-Assad’s ruling regime.

To date the concept has failed to take hold inside the Obama administration or on Capitol Hill because of serious concerns about flooding a troubled region with dangerous weapons that someday might fall into the wrong hands.

So a growing number of U.S. observers are beginning to wonder if technology might provide an answer to these worries.

Could sophisticated weapons, such as anti-aircraft missile systems, be outfitted with mechanisms that would disable them if they fell into the wrong hands? Such weapons, it is believed, might tip the balance in favor of the rebels in the same way that Stinger anti-aircraft missiles, provided by the United States to the Afghan Mujahedeen, helped expel the Soviet Union from Afghanistan.

The Obama administration has refused to supply any kind of lethal aid to the Syrian opposition, in part because of the concern that terrorists might obtain them and use them against the U.S. or its allies. The Stinger is a heat-seeking missile that locks onto hot airplane engine exhaust and, at the last moment, swerves to home in on the aircraft itself.

But military analyst Anthony Cordesman says it should be possible for the United States to reduce the risk posed by any such weapons if they were obtained by people hostile to the U.S. and friends. In theory, the U.S. could modify Stinger anti-aircraft missiles and anti-tank weapons with batteries that cease functioning in a few weeks or months. The weapons might also be made to require authentication codes before they are enabled to work.

“I think it would be relatively decisive,” Cordesman told the NewsHour. “You could probably quickly develop…a device which would inactivate the weapon through two sources: one is a limited-life power supply; and the other is a fail-safe mechanism that would…make it inactive or would require a code to activate it.”

A former Pentagon official now at the Center for Strategic and International Studies, Cordesman stressed that this type of weapon would have to be thoroughly tested to make sure the controls work and could not be undone.

Installing GPS-disabling devices so that Stinger missiles only worked in a designated geographic area, such as only in Syria, is another control mechanism that should be developed, he said. However, the more sophisticated the control device, the longer it would take to develop, said Cordesman, who has laid out ideas for these types of provisions for the Syrian opposition in a recent paper, “Syria, U.S. Power Projection, and the Search for an ‘Equalizer.'” [http://csis.org/publication/syria-us-power-projection-and-search-equalizer]

This idea appears to be catching on among some former foreign policy officials — both Democrats and Republicans — who have advocated providing lethal aid to the Syrian rebels but who have encountered pushback because of worries about proliferation.

“Right now, the single most useful military step I think would be to make it impossible for Assad to use either helicopter gunships or fixed-wing aircraft,” said Elliott Abrams, who served in the White House under President George W. Bush at the State Department during the Reagan administration.

“If you could prevent later abuse — targeting of commercial aircraft, for example, outside of Syria — I would [support it],” he said. “I would like to get Assad’s air force out of this war. You would save a lot of lives.”

Anne-Marie Slaughter, who until last year served at the State Department under President Obama, has been a vocal advocate of arming the Syrian opposition. Interviewed by the NewsHour, she also endorsed the idea of installing GPS-disabling mechanisms on Stinger missiles and providing them to Syrian insurgents.

By including this type of technological limitation, “at least you can be much more certain that the weapon you give to the Free Syrian Army doesn’t end up shooting down an American airliner anywhere in the world,” Slaughter said.

The focus on disabling Assad’s aircraft has grown as a concern. Over the past few months, as the Syrian opposition has made advances on the ground, the government has resorted to using aircraft in its bid to suppress the uprising.

“The Assad regime began using helicopters at the end of May when rebels made unexpected gains in Latakia, Aleppo and Idlib provinces,” said Joseph Holliday, a senior research analyst at the Institute for the Study of War.

“With the limited ground forces at the regime’s disposal, they resorted to air strikes. In August, the regime began using fixed-wing aircraft — jets — for bombing and strafing runs and went from zero use to consistently heavy use very quickly. This coincided with rebel gains in Aleppo city.” 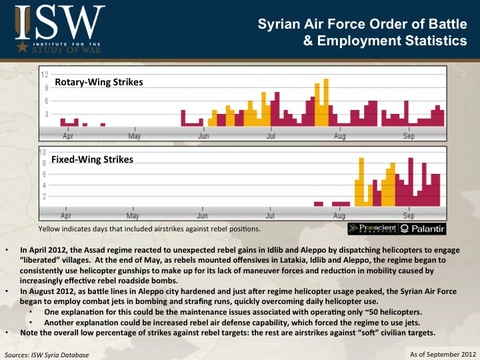 Courtesy of Institute for the Study of War.

However, a number of former military officers with extensive experience working with Stingers remain concerned, saying these missiles should not be distributed to regime opponents in Syria even with special disabling technology.

“This is a really big deal if it doesn’t work,” said retired Brig. Gen. Robert Drolet, who was the U.S. Army’s Stinger program manager in the late 1980s and went on to be his service’s top officer in charge of air defense.

“I think it’s too risky,” he said. “If it works, it’s great. But if it doesn’t, it’s got dire consequences. The downside is drastic: the proliferation of the most effective shoulder-fired anti-aircraft missile….So this is not a good idea.”

In addition, he doubts such a system could be developed in time to help the Syrian rebels.

“If OnStar can figure out how to unlock my car, I would assume there must be some technical way to have GPS control a Stinger,” said Drolet, referring to General Motors’ remote road-assistance service. “But it would be costly. It would have to be designed and developed and tested, and by the time you did this, this conflict might be over.”

Another former Army official elaborated on just what might go wrong.

“Whatever you can modify, another guy can reverse engineer and unmodify,” said retired Col. Vincent Tedesco, Jr., who commanded Army units with Stingers missiles. “So, some little thing that allows you to switch on and off based on where you are on the face of the earth at the time you turn it on, I don’t believe that it’s that hard to undo. And having a very good heat-seeking missile in the hands of bad people is the furthest thing that we want in America.”

Tedesco warned that these dangerous missiles could somehow be smuggled back into the United States and potentially be used to shoot down civilian airliners — even from suburban neighborhoods adjacent to Washington’s Ronald Reagan National Airport.

The Army and the Raytheon Corp., the manufacturer of Stinger missiles, declined to talk with the NewsHour for this story.

Three decades ago, the Reagan administration faced a similar choice in wanting to assist Afghan rebels fighting a better-armed foe, but also worried about the consequences of weapons falling into the hands of terrorists. In 1985, Michael Pillsbury – at the time a Defense Department policy official — visited a Stinger missile factory in Gainesville, Va., 45 miles outside Washington DC, to explore the possibility of making changes to the missile.

A key advocate of providing Stingers to the Afghan Mujahedeen fighting the Soviet Union, Pillsbury asked the engineers, “Could you have the batteries go dead after a certain number of months or years so the Stinger would not be useful in two or three years?” he told the NewsHour.

“Engineers will promise you almost anything is possible — but it often takes years” to develop, he said. “They could do anything given time to do it. But nothing could be done quickly. That is what we established. Nothing in 30 days….It wasn’t easy to get the batteries to be able to expire.”

Pillsbury was reluctant to reveal too much about the program to provide the with Mujahideen Stingers, saying the program was classified. According to reports, about 2,300 Stingers were provided, some of which included batteries designed to expire.

But Pillsbury did say that he believed the Stingers proved decisive against the Soviets. Three Soviet helicopters were shot down in one raid on the first day they were used, he said. The accomplishment significantly lifted Mujahedeen morale and the Soviet leadership was left stunned.

After the Soviet withdrawal from Afghanistan in 1989, the CIA reportedly initiated a buy-back program in which Mujahedeen rebels were offered rewards for turning in their Stinger missile systems.

In Pillsbury’s view, before providing advanced weapons to the Syrian opposition, the Obama administration should corral the military leaders of the Syria opposition into a more effective coalition, rather than just focusing on working with the opposition’s political leadership. Once rebel forces agree on objectives and strategy, then the next step might be to determine what weapons and assistance would be appropriate to provide, he said.

Pillsbury said he was uncertain, though, how decisive Stinger missiles might be in the hands of the Syrian opposition.

“I don’t think the strategic goals and evaluation has been done yet,” he said. “I would have to understand a lot better the sources of Assad’s power and what has to happen before he would want to move to southern France, shall we say, or be assassinated or [whatever] would be done that would be satisfactory to most of the rebels.”