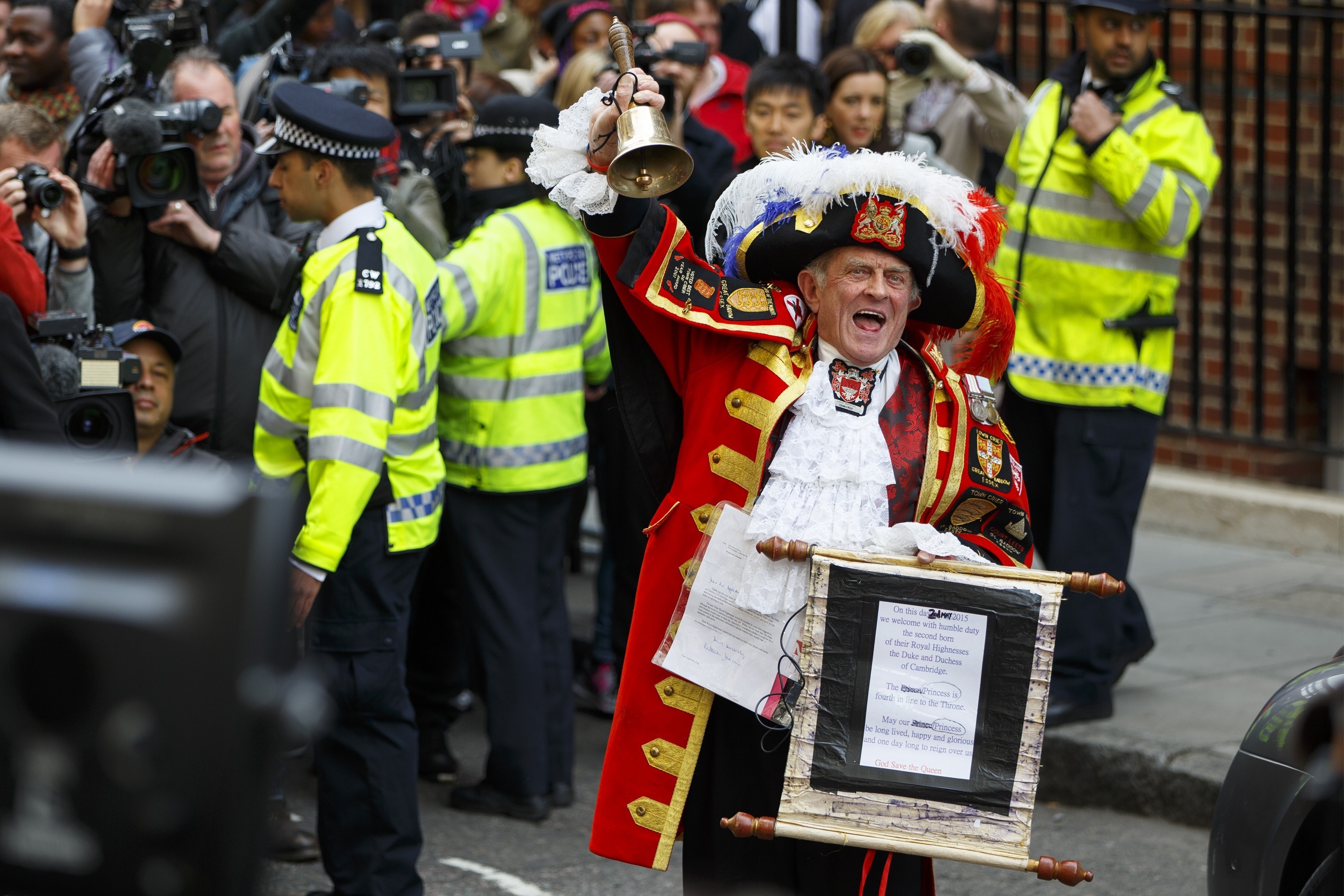 Unofficial Town Crier Tony Appleton announces The Duchess of Cambridge has given birth to a girl outside St. Mary’s Hospital in London, England on May 2, 2015. (Photo by Tolga Akmen/Anadolu Agency/Getty Images)

And true to form, swelling throngs of enthusiastic well-wishers (and droves of international press) who began congregating outside of St. Mary’s Hospital in Central London earlier in the week were brimming with national pride. 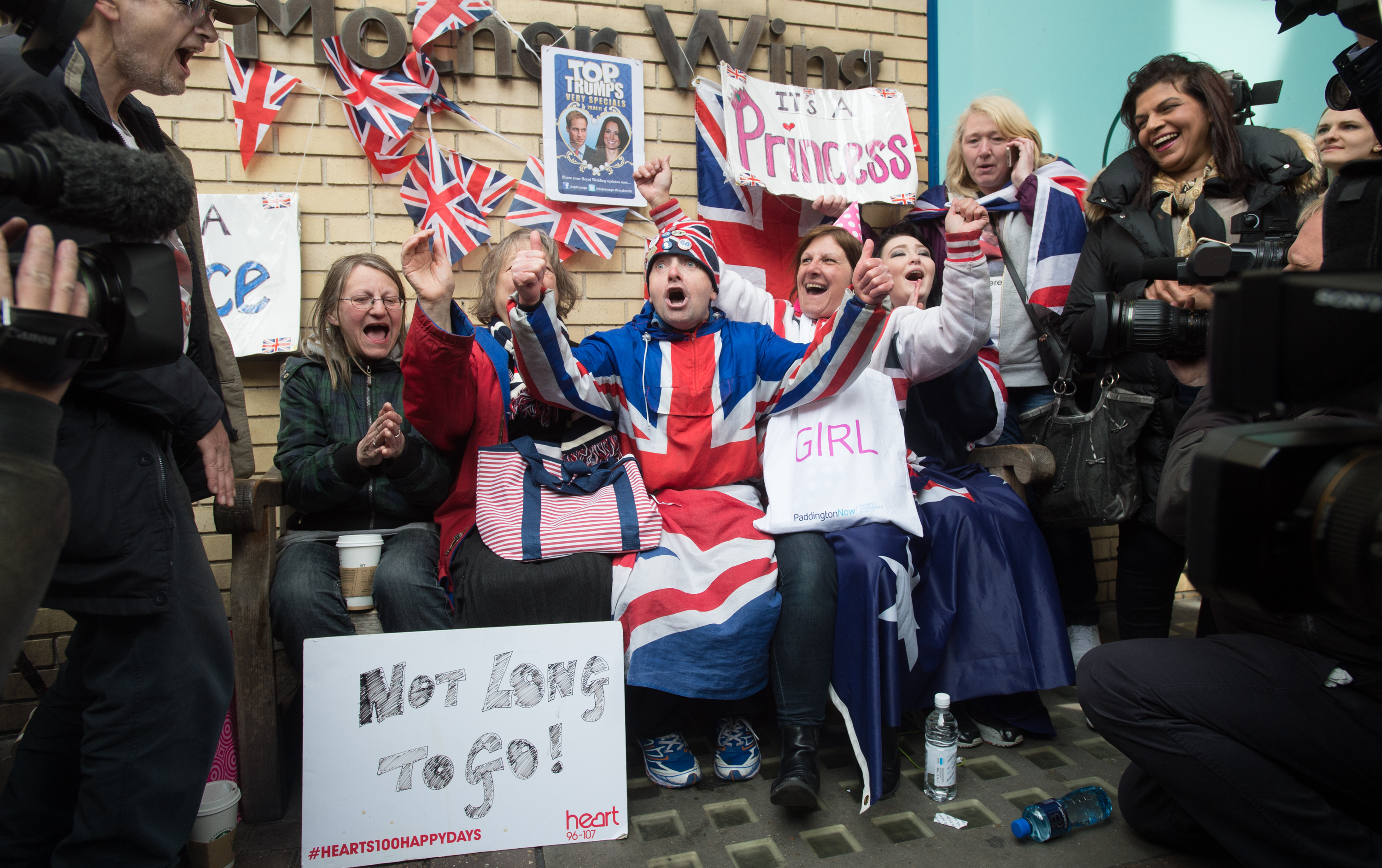 Royal fans celebrate the news the Duke and Duchess of Cambridge have given birth to a baby girl at St Mary’s Hospital on May 2, 2015 in London, England. (Photo by Samir Hussein/WireImage)

According to the palace statement, the princess was “safely delivered” at 8:34 a.m. local time, weighing 8 pounds 3 ounces.

The unnamed newborn is fourth in line to the throne behind her grandfather, Prince Charles; her father, Prince William; and her 21-month-old older brother, Prince George. 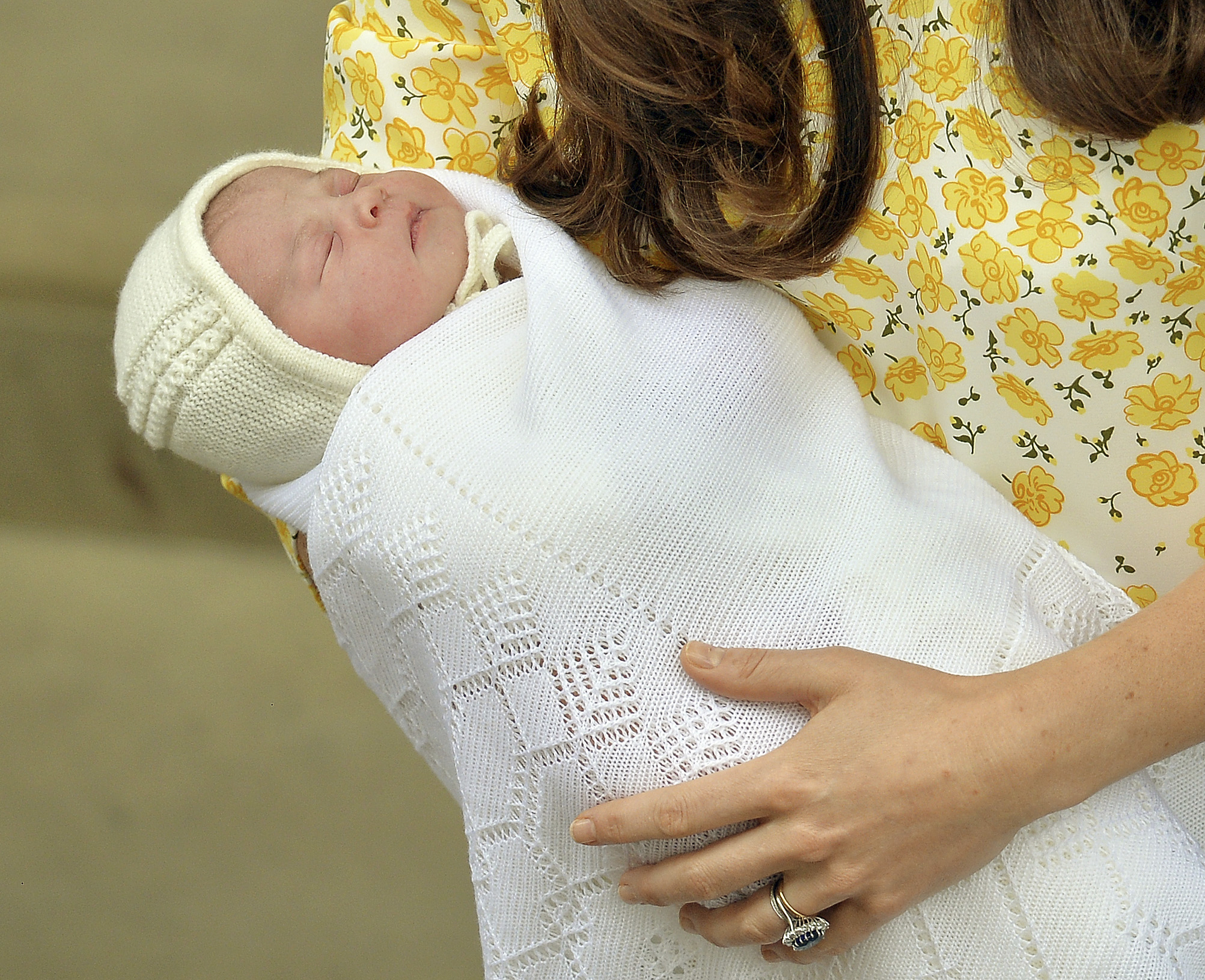 Britain’s Catherine, Duchess of Cambridge, holds her baby daughter outside the Lindo Wing of St Mary’s Hospital, in London, Britain May 2, 2015. The Duchess of Cambridge, the wife of Prince William, gave birth to a girl on Saturday, the couple’s second child and a sister to one-year-old Prince George. REUTERS/John Stillwell/pool

It’s unclear when the palace will announce the name of the baby. Prince William’s name wasn’t announced until a week after his birth, and Prince George’s name was revealed two days after he was born.

Contenders for the princess’s moniker include the bookmaker-favorite, Alice, the crowd-pleasing Diana, and the ultra-royal Elizabeth, among others. 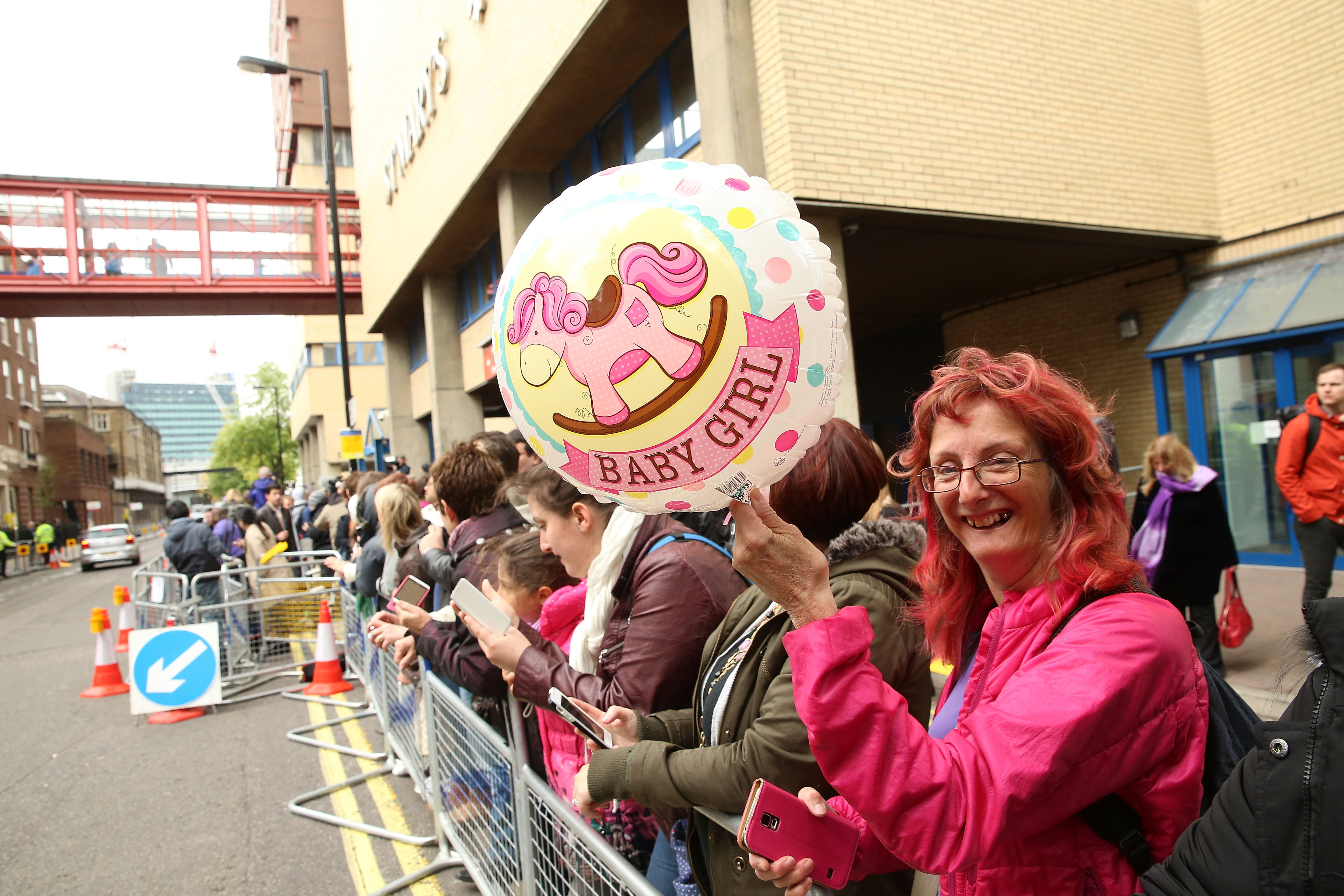 Royal fans celebrate the announcement that Catherine, Duchess Of Cambridge has given birth to a baby girl, outside the Lindo Wing at St Mary’s Hospital on May 2, 2015 in London, England. (Photo by Chris Jackson/Getty Images)

Both Catherine and her new daughter are “doing well,” the palace said, and as Prince William left the hospital briefly to pick up his son, he told the waiting crowds they were “very happy,” according to news reports. 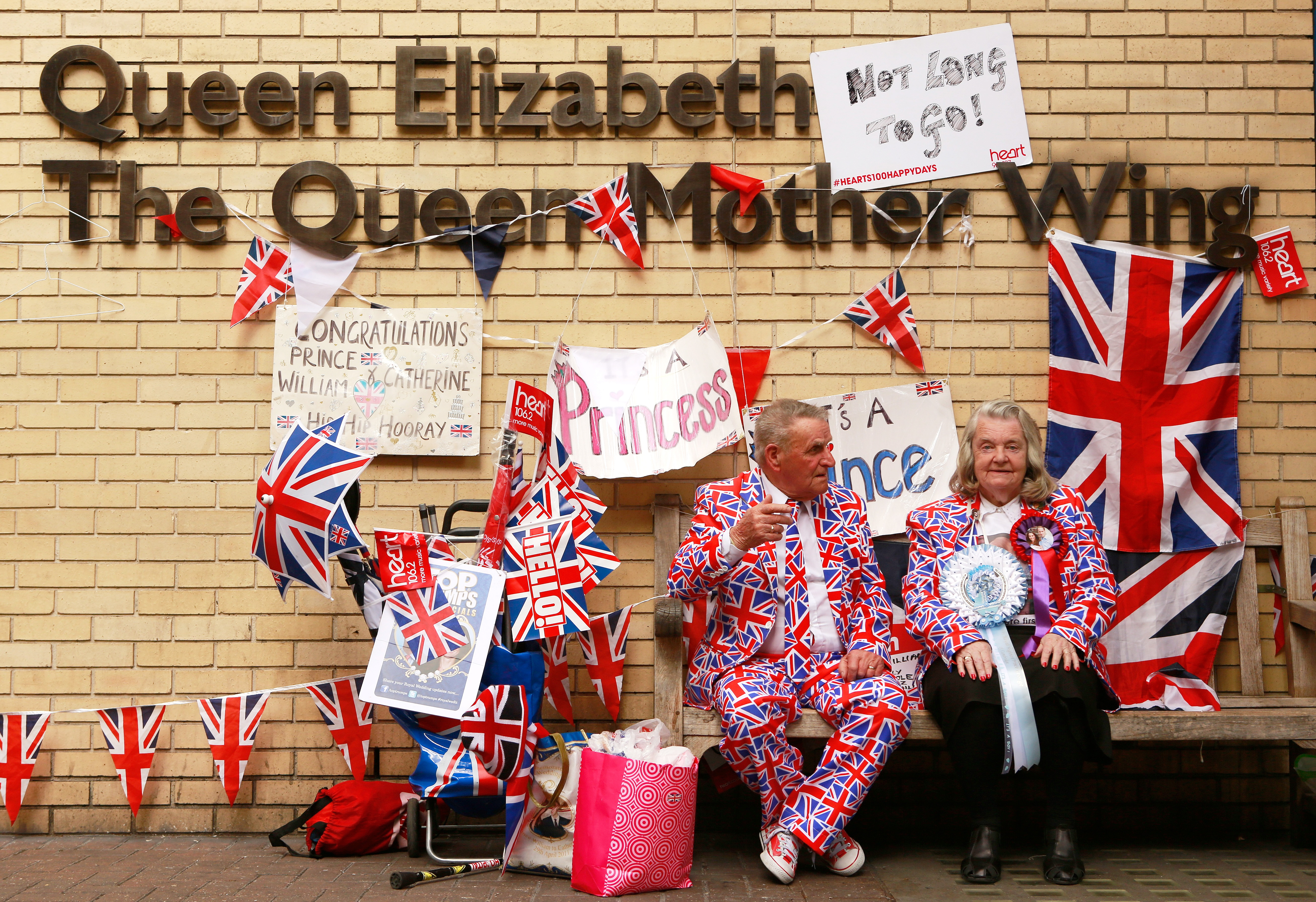 Royal enthusiasts sit outside the Lindo wing of St. Mary’s Hospital where Duchess of Cambridge Kate Middleton gave birth to her second child on May 2, 2015. REUTERS/Cathal McNaughton

Left: Britain's Prince William and his wife Catherine, Duchess of Cambridge, appear with their baby daughter outside the Lindo Wing of St Mary's Hospital, in London, Britain May 2, 2015. The Duchess of Cambridge, gave birth to a girl on Saturday, the couple's second child and a sister to one-year-old Prince George. REUTERS/Cathal McNaughton