KABUL, Afghanistan (AP) — A blast went off Friday at a mosque packed with Shiite Muslim worshippers in northern Afghanistan, killing or wounding at least 100 people, a Taliban police official said.

There was no immediate claim of responsibility for the blast, which took place in Kunduz, the capital of Kunduz province, but militants from the Islamic State group have a long history of attacking Afghanistan’s Shiite minority.

Dost Mohammad Obaida, the deputy police chief for Kunduz province, said that the “majority of them have been killed,” in reference to the victims. He said the attack may have been carried out by a suicide bomber who had mingled among the worshipers inside the mosque.

“I assure our Shiite brothers that the Taliban are prepared to ensure their safety,” Obaida said, adding that an investigation was underway.

If confirmed, a death toll of dozens would be the highest since U.S. and NATO forces left Afghanistan at the end of August and the Taliban took control of the country. The Taliban have been targeted in a series of deadly attacks by rival IS militants, including shooting ambushes and an explosion at a mosque in the capital of Kabul.

The Kunduz explosion went off during the weekly Friday prayer service at the Gozar-e-Sayed Abad Mosque. The Friday noon prayer is the highlight of the Muslim religious week, and mosques are typically crowded. Witness Ali Reza said he was praying at the time of the explosion and reported seeing many casualties.

Photos and video from the scene showed rescuers carrying a body wrapped in a blanket from the mosque to an ambulance. The stairs at the entrance of the mosque were covered in blood. Debris from the blast covered the floor and the mosque’s lofty ceiling was charred black. 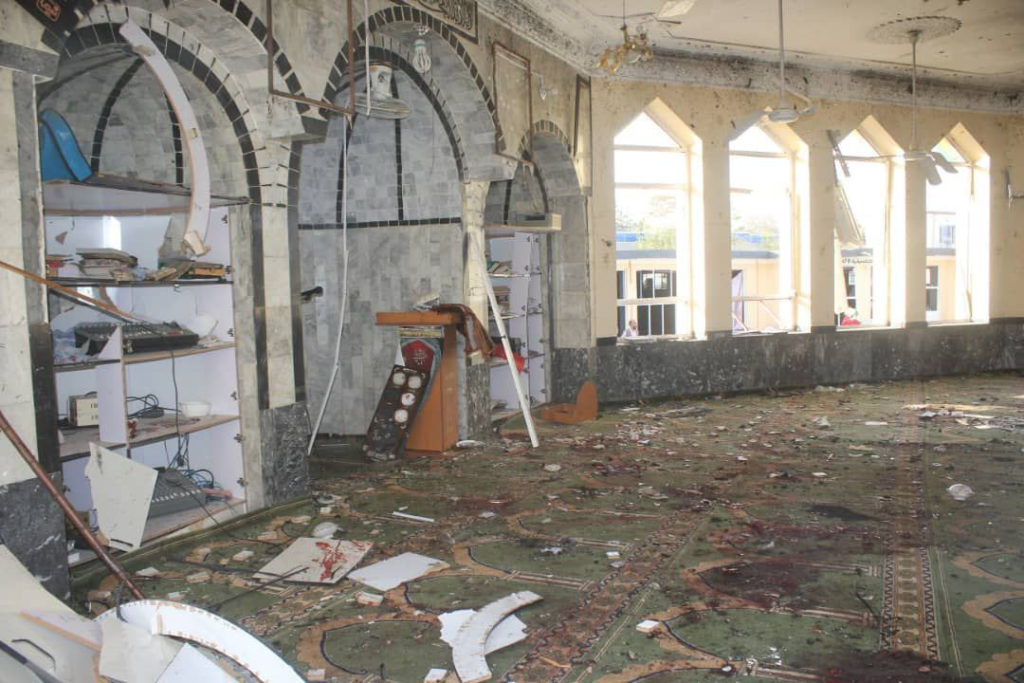 An inside view of the damaged Seyedabad Grand Mosque after a powerful blast ripped through the Shiite community mosque full of worshippers during weekly Friday prayers, killing and injuring “many,” in northern Kunduz province of Afghanistan on October 8, 2021. Photo by Zahir Niyazi/Anadolu Agency via Getty Images

A resident of the area, Hussaindad Rezayee, said he rushed to the mosque as soon as the explosion went off. “I was busy at home doing construction work, and when the prayers started, the explosion happened,” he said. “I came to look for my relatives, the mosque was full.”

Earlier Friday, the chief Taliban spokesman Zabihullah Mujahid said the Shiite mosque was the target and that a “large number” of worshippers were killed and wounded. He said Taliban special forces had arrived to the scene and were investigating the incident.

The Taliban leadership has been grappling with a growing threat from the local Islamic State affiliate, known as the Islamic State in Khorasan. IS militants have ramped up attacks to target their rivals, including two recent deadly bombings in Kabul.

IS has also declared war on Afghanistan’s minority Shiites and has taken responsibility for some of the worst attacks targeting the community, including attacks on their mosques in Kabul and the western province of Herat.

The United Nations mission in Afghanistan condemned Friday’s attack, saying it was “part of a disturbing pattern of violence” targeting religious institutions.

Previously, IS had claimed a bombing on Sunday outside Kabul’s Eid Gah Mosque that killed at least five civilians. Another attack on a madrassa, a religious school, in Khost province on Wednesday was not claimed.

The local Islamic State affiliate also claimed responsibility for the horrific Aug. 26 bombing that killed at least 169 Afghans and 13 U.S. military personnel outside the Kabul airport in the final days of the chaotic American pullout from Afghanistan.

Since the U.S. pullout, IS attacks have been mostly in eastern Afghanistan — the regional base for the IS affiliate — and in Kabul.

In northern Kunduz province, ethnic Hazaras, who are mostly Shiites, make up about 6% of the province’s population of nearly 1 million people. The province also has a large ethnic Uzbek population that has been targeted for recruitment by the IS, which is closely aligned with the militant Islamic Movement of Uzbekistan.

Friday’s attack, if claimed by IS, will also be worrying for Afghanistan’s northern Central Asian neighbors and Russia, which has been courting the Taliban for years as an ally against the creeping IS in the region.

Left: A Taliban flag is seen on a hilltop in Kabul, Afghanistan. On Friday, more than 200 miles north of the capital, a bombing attack in Kunduz, Afghanistan, targeted worshippers during Friday prayers. Photo by Jorge Silva/Reuters