Which Countries’ Citizens Consider the U.S. More of an Enemy? 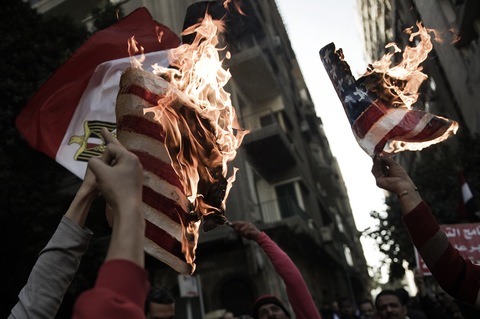 Egyptian protesters burn a U.S. flag during a demonstration outside the American embassy in Cairo on March 9, 2012 before clashes broke out with security forces. According to Pew, 16 percent of Egyptians have a favorable opinion of the U.S. and only 19 percent consider America more of a partner than an enemy. Photo by Gianluigi Guercia/AFP/Getty Images

Pew Research recently released a massive international study of America’s image around the globe. We’ve been keeping our eye on how much and which countries receive military aid from the U.S., so we wondered how various countries view America, narrowed down by those that received military aid in 2011.

To be clear: we are not attempting to prove or disprove a causality (more military money translating into more ‘likes’ for America, so to speak) between money and attitudes. We wanted a smaller data set and considered narrowing the pool to countries who receive military aid as an interesting way to go.

We decided to look at whether citizens of other countries had a favorable view of the United States or not, and plotted that against whether they thought the U.S. was more of a partner than an enemy.

Of countries on our list, we found there is a general correlation between the higher an opinion of the U.S. and a higher percentage considering the U.S. as more of a partner instead of an enemy.

But some interesting correlations emerged. African countries on our list seem to really like us: they have both a highly favorable opinion of the U.S. and see the U.S. as a partner. Europe and Asia run lukewarm to more favorable. The Middle East trends towards the negative (lower favorability and lower perception as the U.S. as partner), minus the exception of Israel. Of the countries on the list, Israel loo favorably the U.S. highest.

Egyptians, on the other hand, have generally a low favorability of the U.S. and only about a fifth consider the U.S. more a partner than enemy.

Some countries seemed to think of their relationship as more strategic. Germany, for example, has a middle-of-the-road favorability of the U.S.: 53 percent. But almost three quarters of Germans consider the U.S. as a partner. Britain and the Czech Republic show similar relationships.

Poles, on the other hand, weren’t very likely to think of the U.S. as a partner (only 40 percent), but 67 percent had a favorable view of the U.S.