Dispatch from Athens: The Road to the Acropolis is Closed 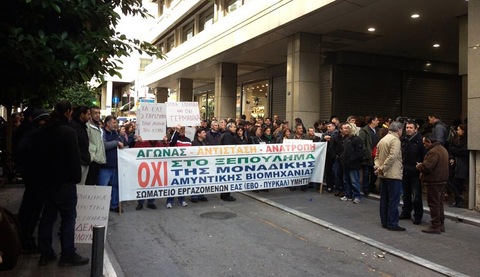 One of Athens’ famous demonstrations. Photos via Twitter by Jeffrey Brown

ATHENS — I know from reading Homer: The gods were having a bit of fun with me. We had been kidding John Psaropoulos, the local producer we’re working with, about not ‘arranging’ one of Athens’ famed street demonstrations for us and our camera. Hardly a day goes by without one somewhere, we’d understood — just not in our first few days here. One duly arrived on our last full day Wednesday. But the joke came about an hour later, when I jumped in a cab to get to the Acropolis — with not a lot of time to make it before closing — and was told by the driver, “Sorry, a demonstration. The road to the Acropolis…”

One can laugh, one can cry, or one can quickly learn to use the metro. One stop, change lines, two more stops and I made it in time for the climb to the Parthenon. Take that, gods of Olympus! (Uh oh. Having written those words, I realize that Athenians should now prepare for their metro system to suddenly shut down.) 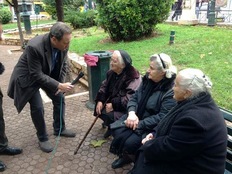 Talking with three women in Amerikis square who said they barely have enough money for food.

You can probably come to Athens and not see the crisis here. In many ways, life goes on, certainly in the best parts of town amid the Christmas decorations. But nearly 25 percent unemployment (more than 50 percent for young people), five-going-on-six years of negative growth, budget cuts everywhere — just stop and ask and you quickly see that nearly everyone but the super rich is affected in some way. There’s talk here of the ‘death of the middle class’ and we’ve met people who’ve fallen out of it into poverty. Politicians are blamed, bankers are blamed, immigrants are blamed (in a growing number of cases with serious and violent consequences).

Where’s it headed? One political scientist told us he thinks the Greek people have on the whole shown maturity and recognized that they are themselves to blame for living way beyond their means. Most Greeks, he said, are displaying great patience and not ready to storm Parliament. How long will that last? Some tell us not long at all. Indeed, they say, the fraying of society is well underway, with increased support for extreme political parties, violence against immigrants, and an utter lack of confidence in the system.

We’ll unfold this in our coming reports. Along the way, some memorable moments away from the camera: 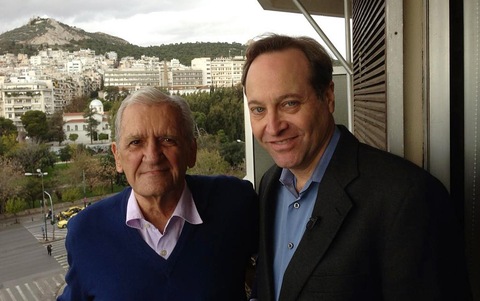