Dispatch from ground zero for the Donetsk People’s Republic

DONETSK, Eastern Ukraine — Just two months ago, this 11-story building in the heart of the state capital was the symbol of Ukrainian central government power in its easternmost region, Donetsk. We were there to interview the new governor, steel and energy oligarch Sergei Taruta. He was most proud of the fact that he and the local police had retaken the administration building from pro-Russian separatists.

But now the separatists are back in charge. They are well ensconced behind barricades of tires, concertina wire and checkpoints. Russian flags fly atop tents, which sport signs declaring “Stop Ukrainian fascism, ” and “America and Europe: Keep your hands off Ukraine and Russia. We are one nation.”

Inside, though, the atmosphere is a little less charged. After six weeks of re-occupation, it feels more like a college administration building taken over by students in the ’70s than it does the headquarters of a Russian-backed challenge to the Ukrainian government here. The walls are festooned with graffiti and tired posters. Empty coffee cups, cigarette butts and piles of trash litter the corners, and beat-up computers and printers are piled in the hallways. 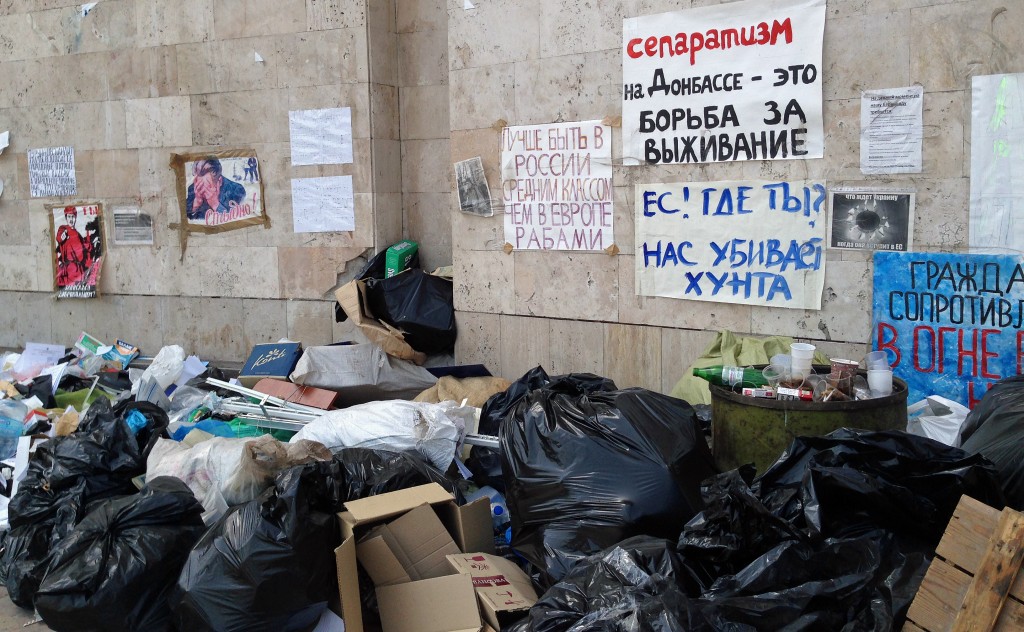 Trash piles up inside a government building in Donetsk in eastern Ukraine. Photo by Margaret Warner

The people bustling about inside are mostly young men in their 20s and 30s — perhaps because the elevators no longer work, so you have to be fit to move around. But otherwise they seem to lack for nothing. The authorities have not cut off the water or power supplies, and the occupiers say they have plenty of food and medical care.

Nobody wears ski masks as they reportedly did shortly after retaking the building in early April. Only on the 10th floor, where Taruta’s office had been, did we see a handful of them carrying sidearms, and we heard three men barking into the phone in native Russian rather than the Ukrainian-accented Russian commonly spoken here.

Typical of the local occupiers were four young men — including a former furniture designer, and an IT specialist — we found hunched over laptops in an office, working on the website for the self-proclaimed People’s Republic of Donetsk. That’s the entity that since the May 11 “independence referendum” claims to represent the people here.

Viktor Priss, a 28-year-old IT specialist wearing a Che Guevara T-shirt, said he was spurred to join the separatists by the February revolution in Kiev’s Maidan Square, when he felt that western Ukrainians overthrew the country’s legitimately elected president from the East, Viktor Yanukovych. Yet Priss and his new compatriots didn’t appear to agree on what future they seek — a fully independent Donetsk, a Donetsk joined to Russia or a Donetsk remaining in Ukraine but with much greater independence. “We don’t know what will happen,” he said. 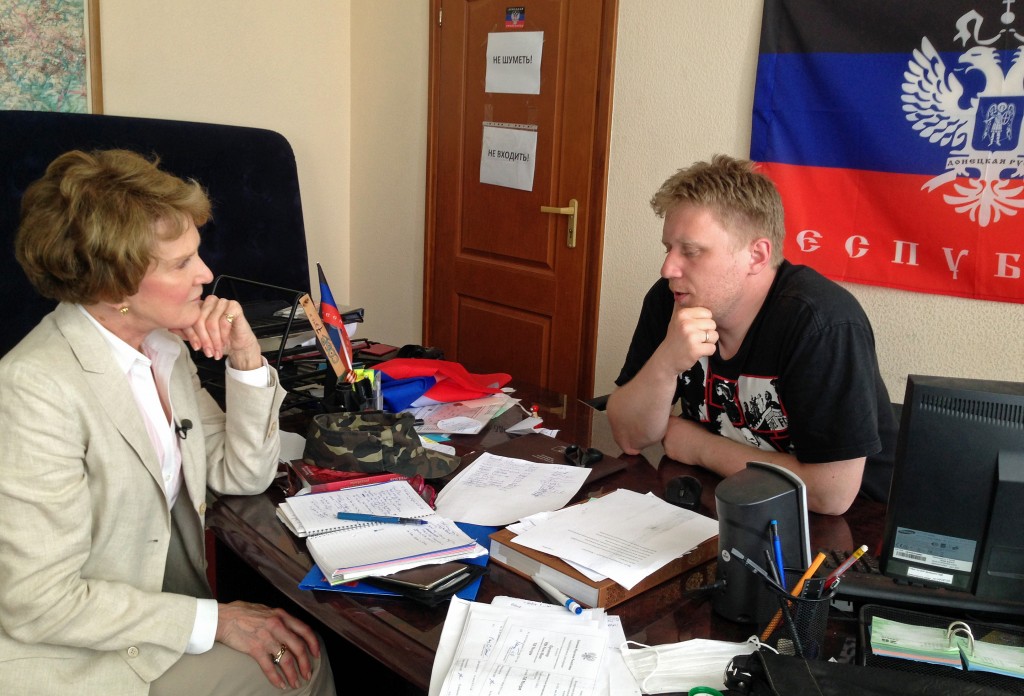 Separatists’ website IT specialist Viktor Priss sits with Margaret Warner in his recently occupied office with the flag of the People’s Republic of Donetsk. Photo by Natalya Gryvnyak

I asked them if they felt more Ukrainian or Russian in their identity. Two laughed and the other two shrugged. “I was raised as a Ukrainian,” said Viktor, who was 5 years old when Ukrainian parliament declared independence from the collapsing USSR and all its other republics, including Russia. “But now that I’m forced to choose, in my heart I am of Russian culture.” Asked what he meant by that, he paused for a moment before saying, “I am of Slavic culture.” Ukraine is part of the thousands-year-old Slavic civilization too, of course.

What was striking to me was that Priss and his friends seemed to lack any sense of Ukrainian identity, despite having grown up for the last 23 years in a “free and independent Ukraine.” They said they were never taught the history of Ukraine as a distinct entity, neither by their teachers nor by their textbooks. They learned only about Ukraine’s prominent status within czarist Russia and as the breadbasket and a major industrial heartland of the USSR. Said Viktor, who is of mixed parentage like so many here, “I think I never knew what it was to be ‘Ukrainian.’”

If you ask people in Egypt if they feel Egyptian, the answer is a resounding yes — and they can tell you why. Whatever their political differences, Egyptians share a sense of national and cultural identity. The same goes for most French, for most British and for most Americans, steeped as they are in their common history and national myths.

But on display here today — the consequences of a tragically missed opportunity by every Ukrainian government since independence nearly a quarter century ago, to inculcate a proud national identity and founding mythology in its youngest citizens. Now, facing the gravest crisis of its young existence, Ukraine faces the task of trying to forge that identity against odds that seem to grow longer every day.