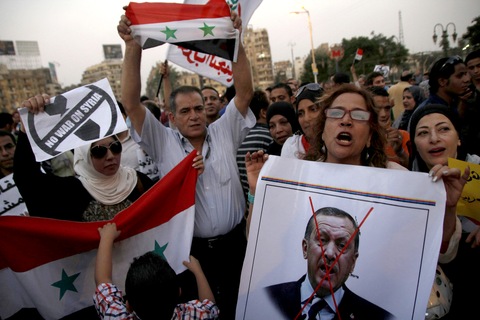 An Egyptian woman holds a crossed-out portrait of Turkish Prime Minister Recep Tayyip Erdogan during a demonstration in Cairo against a possible U.S. attack on Syria in response to alleged use of chemical weapons by the Syrian government. Photo by Mohamed Abdelmeniem/AFP/Getty Images.

CAIRO — This city has endured pitched battles for two months since the army deposed President Mohamed Morsi — bloody physical fights between Egyptian security and Morsi backers, and some passionate political ones over the rightness of his ouster.

But after spending only a day in this steamy capital, I’m struck by how widely Cairo residents do seem to agree on one thing — their opposition to the idea of a U.S. strike against Syria. 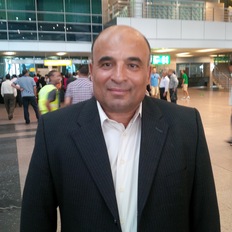 “Most Egyptians oppose an American attack,” state information officer Mohamed Abdul Hai told us at the airport. “It will make the region more unstable. For us in Egypt, the last three years have been unstable enough.”

We’ve heard all sorts of apprehensions from Egyptians of all ages, incomes and education, fears that if the U.S. stirs the boiling pot in Syria, it will spill over to every country in the region. Some talked of more refugee flows, others of violent counter-reactions from the likes of Hezbollah, Iran or Israel. And some suggested that a U.S. attack on the Assad regime will strengthen rebel forces dominated by Jihadi extremists, of the same ilk as the Jihadis the Egyptian military is now struggling to control in Sinai.

It’s not that Egyptians like Syrian president Bashar al Assad. But their distrust of the U.S. is more powerful. We found young security guard Mohamed Abo Zeid pulling night duty in a tiny sentry booth in front of a bank. He believes the Assad regime was indeed behind the august 21 chemical weapons attack that reportedly killed 1400 Syrians. 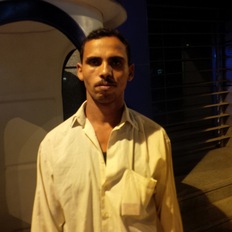 “It’s awful what he’s doing, killing his own people, all those children, all those bodies on TV,” he said. But he called the prospect of a punitive U.S. strike “horrible.” “If Obama attacks Syria,” he said, “I’m afraid Egypt will be next.”

Bookstore clerk Moustafa Kamal shared his distrust. “What’s going on in Syria is an internal problem. It’s not for outside powers to interfere,” he said. 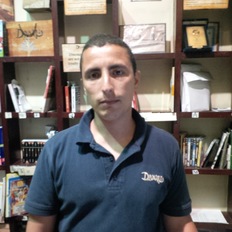 “If Obama strikes, it’s because he wants to create more instability in the Middle East, to help him put his hands on the region and control it.” To what end?, we asked. Kamal had a one-word answer: “oil.”

One of his bookstore shoppers, marketing manager May Khairy, was just as suspicious of president Obama’s motives. 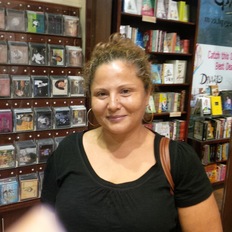 “I believe this would be the first step to attack the rest of the Middle East, as America did in Iraq, and Kuwait,” she said, “another step to protect Israel.”

After decades of anti-U.S. vitriol in state media over American support for Israel, distrust of the United States and its power is not new in Egypt. But Khairy also embraced the latest conspiracy theory here, that the Obama administration had colluded with the Muslim Brotherhood, too eager to endorse Morsi’s election, too reluctant to restrain his autocratic moves — and too quick to criticize the Egyptian military for throwing him out. “Obama supported our first revolution (against Mubarak), but not our revolution against Morsi,” she said. “We don’t believe America was supporting democracy. We feel we’ve been used and misled.”

“You cannot believe the anti-Americanism here now. I’ve never seen it like this,” said Mona Makram Ebeid, a professor and former parliamentarian. “It’s a feeling of deep disappointment.”

Something President Obama might keep in mind as he ponders his next Syria move.