‘I don’t know if I love the country’: Arab Israelis share their stories

On March 23, days after securing a surprisingly strong electoral victory, Israeli Prime Minister Benjamin Netanyahu began what might have been a victory lap with an official apology to the country’s Arab citizens.

On election day, Netanyahu had posted a Facebook message warning that Israel’s 1.7 million Arabs were voting “in droves” to kick him out of office. “The right-wing government is in danger,” he said in a video message then.

Leaders both at home and abroad, including President Barack Obama, criticized those remarks as fear-mongering, and a week after the vote, Netanyahu walked them back.

“I know the things I said a few days ago hurt some of Israel’s citizens and hurt Israel’s Arabs,” Netanyahu told gathered members of Israel’s minority communities. “I had no intention to do that. I apologize for it.”

The dust-up highlighted the often complex relationship between Israel’s Jewish majority and its Arab minority, which comprises a fifth of Israel’s population.

Arabs have sat on the supreme court, and Israel fields Arab ambassadors, but overall Arabs are underrepresented in government positions, academia, and the broader economy. Nearly half of Israel’s Arab population lives in poverty. 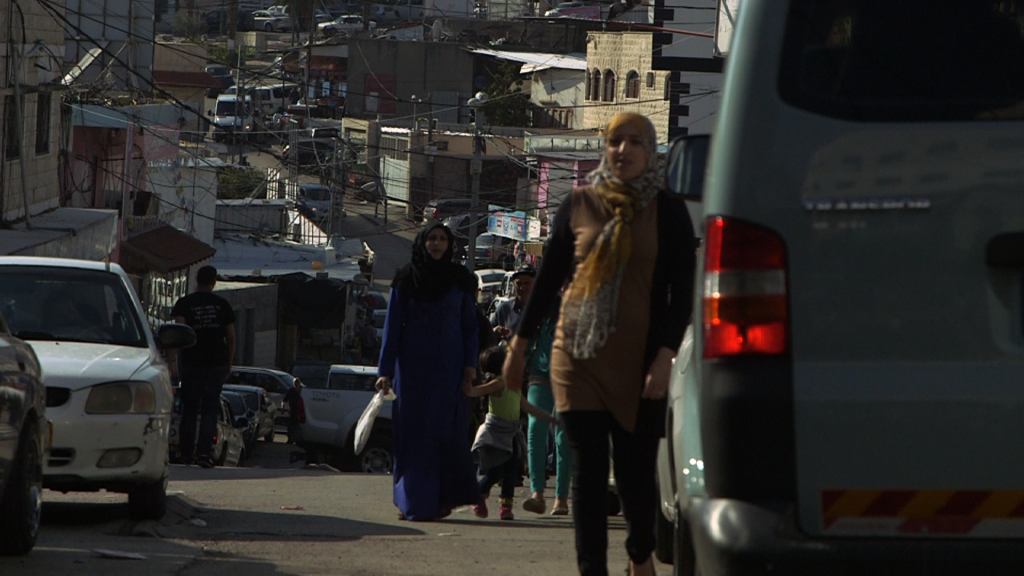 People walk through a market in Barta’a- a town on the border between Israel and the Palestinian territories. Photo by Mori Rothman/NewsHour Weekend

Arab citizens — who sometimes call themselves Palestinians living in Israel — are granted the same legal rights and protections as any other Israelis, yet on a deeper level, many say they feel as if they are treated as second-class citizens.

“I think there a mismatch here which is very unique,” said Guy Ben-Porat, who studies issues of citizenship at Israel’s Ben Gurion University. “The country is Israel, citizenship is Israeli, but the nation is Jewish.”

Since Israel was founded in 1948, Ben-Porat said there has been “a considerable minority who have never been able to feel really part of the state.”

This spring, PBS NewsHour Weekend traveled to Israel to learn more about how Israeli Arabs engage with the political, social and economic landscape. In the course of our reporting, we met three Arab citizens who shared their stories with us.

“Their communities would remain intact”

Driving north from Tel Aviv, it takes about an hour to reach Um el Fahem, an Arab majority city of nearly 50,000 just across the border from the West Bank. It’s situated in the heart of the Wadi Ara, a valley dotted with Arab villages and towns. Um el Fahem is the second-largest Arab enclave in the country, after Nazareth. 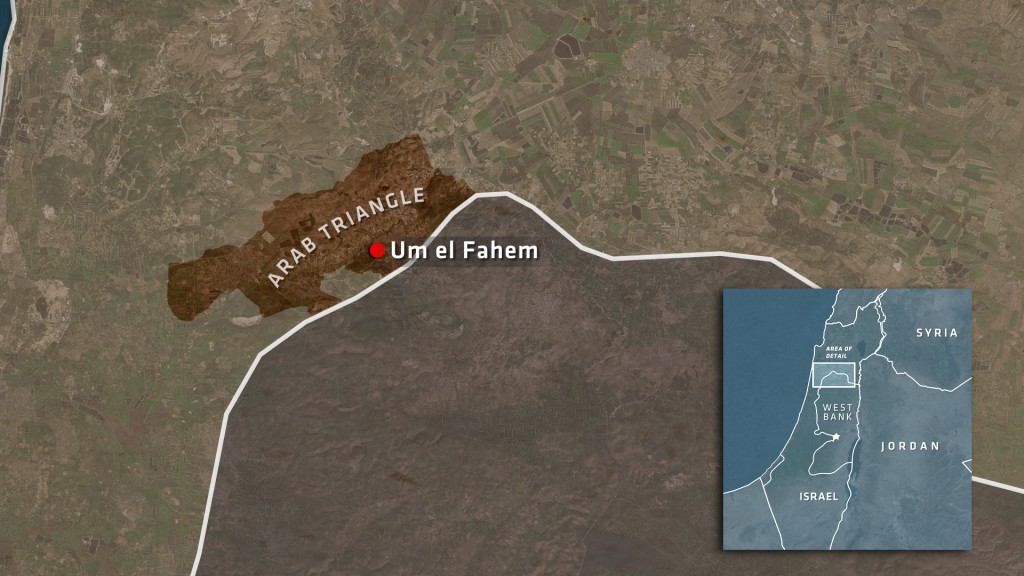 In this spring’s campaign, a proposal re-emerged among some of Israel’s right-wing politicians: create a new Palestinian state by swapping the towns and villages of the Wadi Ara, including Um el Fahem, for Israeli settlements in the West Bank. Overnight, some 300,000 people would lose their citizenship and become nationals of a yet-to-be-formed Palestine.

“The only differences would be the passport that they hold and the ballot box which they put their future votes into,” said Ashley Perry, a UK-born politician with the Yisrael Beiteinu party, which ran videos supporting such a swap and was part of the previous governing coalition. “Everything else would remain the same. Their communities would remain intact.”

In Um el Fahem, such proposals were enough to encourage educator Yousef Jabareen to run for a seat in the parliament, the Knesset. He believes ideas like a population swap are an affront to loyal Arab citizens of Israel — and only strain relations further.

“There is a deterioration,” he said inside a noisy cafe perched above Um el Fahem’s bustling thoroughfare. “Some of my Arab students would tell me that these days they try to avoid speaking in Arabic when they are in the bus or when they are walking to campus. So we feel the deterioration.”

Jabareen won a seat in March and is now part of a 13-member Arab bloc in Israel’s parliament, the third-largest party in the newly-elected Knesset. The election was the largest showing by Arab politicians in Israel’s history, and it’s the first time Israel’s four main Arab political parties ran together under a unified banner, the so-called Joint List.

“People would always tell us, ‘why don’t you work together? Why are you not running in a joint list?’” said Jabareen. “We need to take advantage of any possible way to change or to try to make a change.”

The Joint List is not part of Netanyahu’s slim governing majority, and only this year an Arab parliamentarian was chosen to head a permanent committee in the Knesset. But longtime Netanyahu spokesman Mark Regev told NewsHour this May that the prime minister is prepared to work with its members to close the economic and social gaps between Arab and non-Arab Israelis.

“It has to be in the streets”

In the courtyard of his family home in Um el Fahem, Mahmoud Shreim spoke about his televised confrontation with Ayman Odeh, the leader of the Joint List during the election campaign.

During a roundtable interview staged by a Danish television network at Hebrew University, where Shreim is a student, he told Odeh that politicians can’t change anything. That parliament is a waste of time.

While this year’s balloting brought a near-record number of voters to the polls, Shreim didn’t vote. He says the Israeli state is built to exclude him, and that he will not pledge allegiance to a flag or sing a national anthem devoted to a state that he says considers him less than a full citizen.

“I feel this anger is with me all the time,” he said, “and there’s nothing to do about it.”

In some ways, Shreim is an outlier. His father runs a successful local business in town. He studies business and economics at Hebrew University and drives himself from Jerusalem to Um el Fahem in an Audi. Still, he believes Arab citizens face significant hurdles to success — and that real power is in local governance.

The Islamic movement’s northern branch, a political movement which led previous election boycotts, has repeatedly won local elections in Um el Fahem. Some members of Israel’s Knesset have called for the northern branch to be outlawed.

In an interview with Al Jazeera, Haifa University’s Asad Ghanem said the height of the boycott movement came in 2001 during the second intifada. “Since then the level of participation has grown, but it’s been very slow.”

Despite his distaste for national politics, Shreim says he would never consider leaving Israel permanently.

“I don’t know if I love the country”

Actress and artist Raida Adon isn’t so sure she’ll stay in Israel. Born in the northern city of Acre, she now lives in a sun-drenched apartment in the Jaffa section of Tel Aviv, a neighborhood with a large Arab population. The walls are adorned with her own canvasses — but we met her through a video installation she created that was featured at an art gallery in Um el Fahem.

The work, ‘Beyond the Walls,’ is meant to evoke the Arab refugees who fled their homes following Israel’s War of Independence — what some Arab citizens refer to as the Naqba, the catastrophe.

“I don’t know if I love the country,” she said. “When I’m talking with the Jews, I’m not saying to them that you are jealous, you are taking my land. No, I want him just to listen to my sorrow. I want him to respect my identity and to respect my language and to respect everything that I’m doing like I respect him.”

Adon says she voted in this year’s parliamentary elections — for the Joint List — but she feels that as an Arab citizen in Israel, she is constantly wearing her identity as a kind of scarlet letter.

“It’s like it’s written here ‘48,” she said, pointing to her forehead and referring to the year of Israel’s War of Independence. “I don’t want to just talk about ‘48.” But she says living elsewhere — in a larger country — she could thrive on the anonymity in a place where she doesn’t feel like there’s a constant struggle to define herself.

Back in the cafe in Um el Fahem, new parliamentarian Yousef Jabareen feels Arab citizens like Raida Adon should stay in Israel.

Affirmative action measures and even a public ad campaign encouraging Israelis to hire Arabs have gained traction. And Mark Regev, Netanyahu’s spokesman, says his government will continue to devote resources to infrastructure and education in Arab majority communities.

Still, analysts like Guy Ben Porat say a deeper degree of isolation felt by some in the Arab minority might not be so easy to eliminate.

“When you think that Israeli means being Jewish or Jewish means being Israeli, then it’s a big question,” he said. “How can an Arab be an Israeli, beyond the technical means of holding a passport?”

Left: A boy watches as people walk through the Old City in Jerusalem. Photo by Mori Rothman/NewsHour Weekend