ISTANBUL — Turkey’s president said Saturday the country might pursue a Brexit-like referendum on whether to pursue European Union membership and also lashed out at a critical protest in Switzerland.

President Recep Tayyip Erdogan brought up the proposal at a Turkish-U.K. forum in the southern city of Antalya, referring to the British departure from the EU and saying Turkey “might” hold a similar referendum after the April 16 vote to expand the powers of the Turkish presidency.

The negotiation process for Turkey’s EU membership began in 2005, but has been at a standstill for years.

Tensions between Ankara and several European capitals have been escalating ahead of the contentious April 16 referendum.

Turkish opposition members and Western allies have criticized the constitutional referendum, saying it would grant Erdogan unprecedented authority with limited checks and balances.

At a rally earlier Saturday, Erdogan lashed out at the critics who claimed Turkey would not be allowed into the EU if the referendum passed, saying it would “make our job easier” if Europe made that call and adding “Turkey is no one’s whipping boy.”

Erdogan also criticized a demonstration in Switzerland on Saturday where protesters hung a giant banner depicting the Turkish president with a gun to his head. 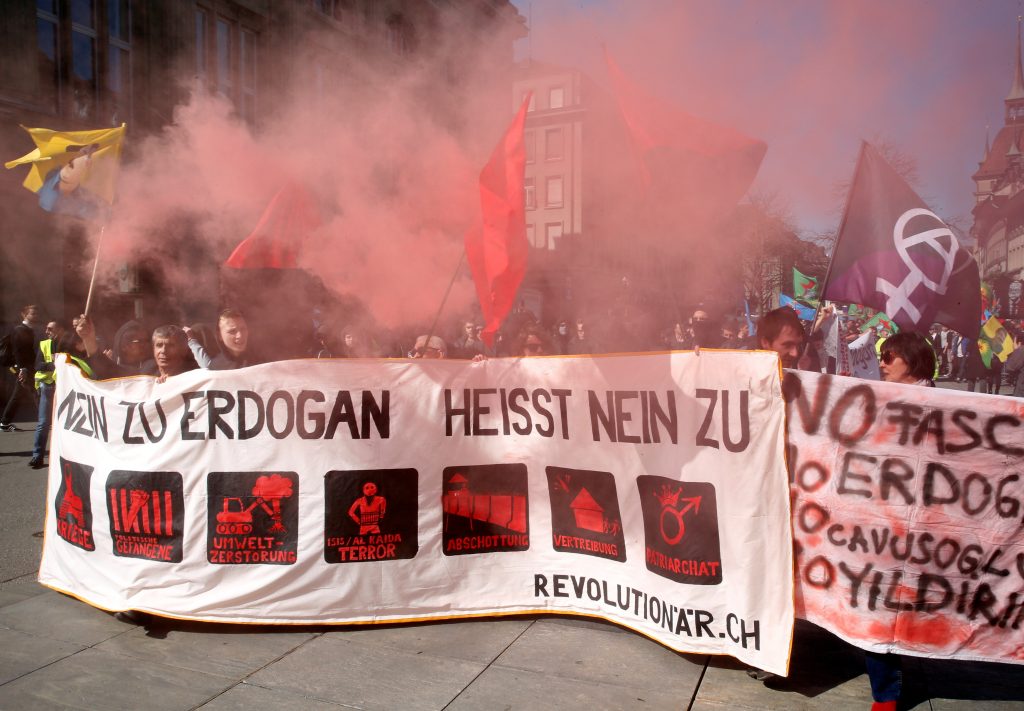 People hold banners and flags during a demonstration against Erdogan dictatorship and in favour of democracy in Turkey in Bern, Switzerland March 25, 2017. The bannerr reads “Say no to Erdogan.” Photo by Ruben Sprich/Reuters

The Turkish Ministry of Foreign Affairs said it had summoned Swiss charge d’affaires to condemn the incident and that the minister had called his Swiss counterpart to voice his displeasure.

The statement also claimed the demonstrators belonged to the outlawed Kurdistan Workers’ Party, or PKK, adding that it would be “closely monitoring the legal and administrative actions to be taken by Swiss authorities regarding this crime.”