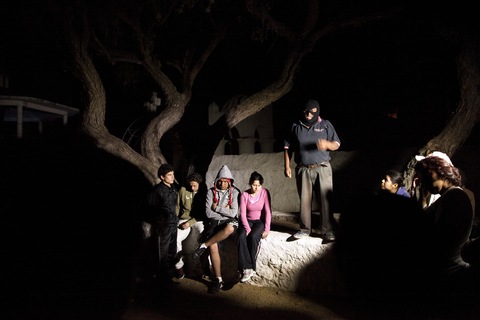 Visitors to the Parque EcoAlberto in the central Mexican state of Hidalgo await instructions for their fake illegal broder crossing. Photo by Irina Zhorov/Fronteras

An unusual amusement park attraction in the central Mexican state of Hidalgo offers visitors the thrills and chills of an illegal border crossing. The attraction takes visitors through a fake United States-Mexico border, complete with fake smugglers and fake border patrol agents.

The aim is to dissuade would be migrants from making the trip. The coyote, or smuggler, leading this simulated illegal border crossing used the name Simon and wore a face mask. Before setting off, he addressed his charges that evening, about 40 students from a private school in Mexico City.

“Tonight we’re going to talk about migration,” Simon said in Spanish. “But for us it isn’t just something rhetorical, but rather the opposite. Because we have endured, we have suffered, of hunger, thirst, injustice, heat, cold, we have suffered from everything.”

Then, under the cover of night, Simon herded them into the woods, toward the fake frontera.

Listen to the report, including sounds from the Parque EcoAlberto.

The actual U.S.-Mexico border is nearly 800 miles away from the Parque EcoAlberto. The park is part of the indigenous HñaHñu community. Tourist can enjoy other recreational attractions like hot springs and rappelling, in addition to the recently added fake border crossing.

But for those who want to simulate the experience of fleeing across the border, without the real danger, the latter attraction is for you. For three hours, tourist groups endure sirens, dogs, chases and the fake border patrol yelling threats.

Maribel Garcia works as an administrator for the park. She says the purpose of the Night Walk is simple.

“Our objective is to stop the immigration that exists amongst our citizens, principally from the state of Mexico to the U.S.,” Garcia said in Spanish.

Garcia says traditionally this region subsisted on agriculture, but that wasn’t bringing the community what it needed.

“Because we didn’t have sewer systems, light, telephone, roads,” she said.

So people went north. The HÃ±aHÃ±u community has lost about 80 percent of its population to the U.S., Garcia estimates, mainly to Arizona and Nevada. Garcia says it was the HÃ±aHÃ±u youth returning home after crossing the real border who thought up this tourist attraction as a way to create income for the community and encourage others to stay in Mexico. 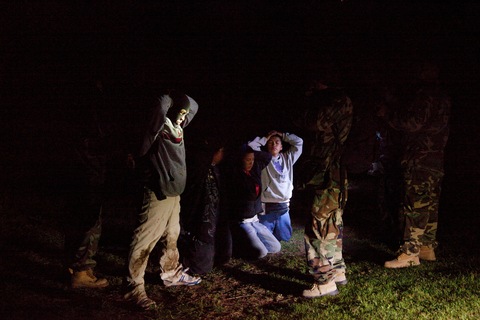 During the tour, participants have an encounter with the fake border patrol. Photo by Irina Zhorov/Fronteras

Titi, who also works as a coyote on the Night Walks, was emphatic that it was not training for future generations.

“We try to help people so that they won’t leave,” Titi said in Spanish. “It’s time to create some employment, to work with our own and regenerate everything, or at least what we can, even though it might be slow going.”

The HÃ±aHÃ±u’s efforts are well timed. According to one estimate, for first time since the 1960s there is net-zero migration from Mexico to the U.S. Increased border patrol, stricter laws in the U.S., rising smuggling fees, violence in the desert and the struggling U.S. economy are keeping more Mexicans at home.

Garcia, the administrator, is hoping the Night Walks convince youth in particular to put their energies into their home communities. 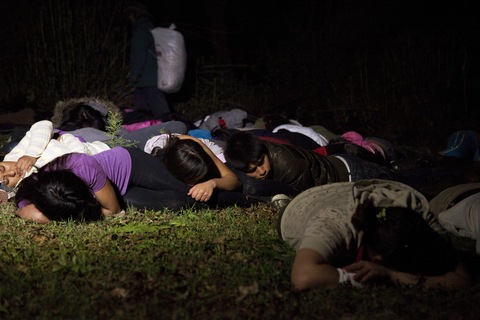 Students get on the ground during an encounter with a fake violent drug smuggler. Photo by Irina Zhorov/Fronteras

The tours cost the equivalent of about $20. The visitors are typically middle-class Mexicans or, like tonight, students from private schools — in other words, not the most likely group to attempt an illegal crossing into the U.S.

Still, there were some who had been thinking about it. Over tea and sweet breads at the end of the walk, Jazmin Arely Moreno Alcazar said she got the message.

“It’s not worth risking it because if we can’t stand a few hours, we won’t be able to stand days. Because it’s very ugly,” Alcazar said in Spanish.

Garcia said it’s difficult to quantify how effective the tours are for other visitors. But as the park’s tourist offerings expand and the number of visitors grow, she said there is a new hope that enough money will come in and that the attraction will encourage more community members to stay put.