Firefighters in Glasgow, Scotland today battled to save what they could of the Glasgow School of Art, one of Scotland’s most famous and treasured buildings. 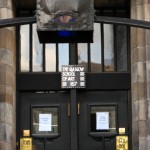 The main doors of the Glasgow School of Art. Photo by Flickr user Charlie Rapple.

Designed by architect Charles Rennie Mackintosh, the sandstone building is not only a working art school, but a work of art itself, as a sterling example of the Art Nouveau style. The Scottish Fire and Rescue Service issued an update tonight to say about 90 percent of the structure is viable, and 70 percent of the contents have been saved.

The BBC and other news outlets reported the Mackintosh building caught fire this afternoon when a projector in the basement exploded. There was speculation that the explosion ignited a foam-based material. Students were in the process of setting up their final projects for a year-end display when the fire broke out. Many of the exhibits were the culmination of 4 years of work.

Our sandstone castle at The Glasgow School of Art will stand tall again. An emotional day seeing fire in the Mackintosh masterwork @GSofA

All students and teachers were evacuated from the building, and there were no reports of injuries.  Many stood in the streets outside watching as firefighters fought to contain the flames.

Want to see the art school’s famous library as it appeared before the fire? The Guardian has a 360 degree interactive panorama here.