NAIROBI, Kenya — A fire swept one of Nairobi’s largest open-air markets early Thursday, killing 15 people and sending 70 injured to hospitals, an official said, as traders who lived there struggled to wake their families and flee.

Young children were among the victims, President Uhuru Kenyatta said in a statement, and many of the injured were in critical condition.

Gikomba market has burned several times in recent years, and Kenyatta said that “we owe the victims, and the people of Nairobi, a clear, credible plan to end these fires.”

Nairobi County Commissioner Kangethe Thuku said six bodies had been recovered and nine were in a building and had yet to be retrieved.

The cause of the fire was not immediately announced but “for now we have declared this site a crime scene,” Thuku said. Security forces guarded the smoking site as workers picked through the blackened rubble.

One market trader, Ruth Kaveke, grasped a wad of burnt currency and said it was the only thing she managed to salvage from her cloth-making store. It was the second time fire has destroyed her only source of livelihood in as many years.

“I live in the market because it is convenient and I wanted to be close by; just in case of fire I could salvage my property,” she said.

Her two children would not easily wake up when the latest fire broke out, however, and by the time she got them to safety it was too late to save anything else, she said. 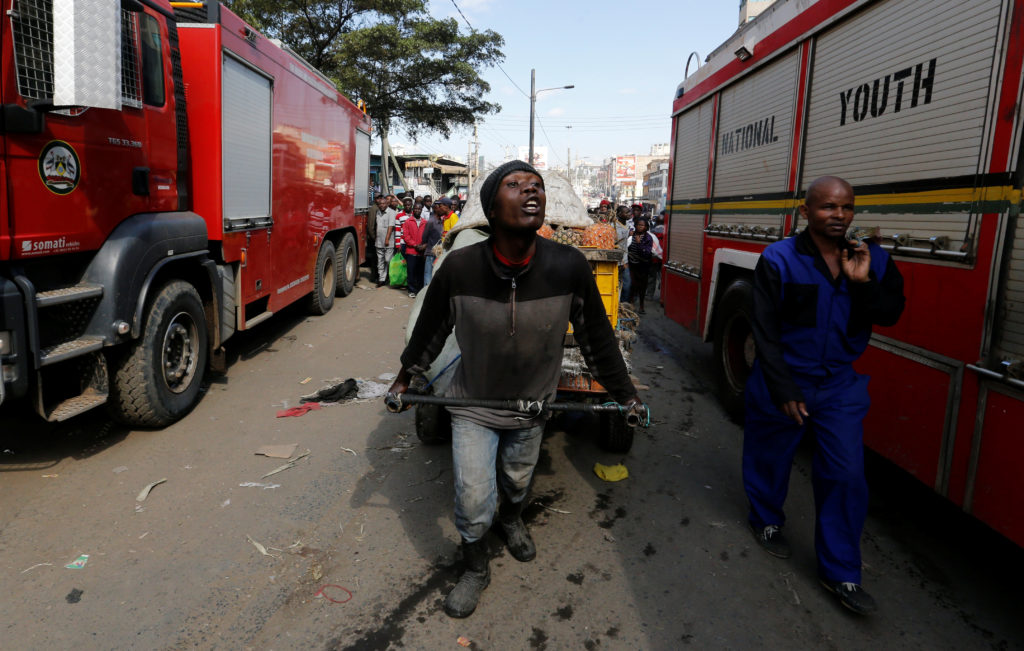 A trader pushes a handcart past fire engines near the scene of fire that gutted down the timber dealership of the Gikomba market and nearby homes in central Nairobi, Kenya June 28, 2018. REUTERS/Thomas Mukoya

The fire started around 2:30 a.m. and was contained about an hour and a half later, according to the St. John Ambulance charity.

Residents said the crowded market has had fires multiple times, and traders have suffered huge losses. Officials have said access roads are clogged with traders who block emergency response services, while critics say those services are poor.

The market is a five-minute walk from Nairobi’s central business district in an area targeted by the Nairobi County Government for an upgrade.

Left: Traders and riot police are seen at the smouldering scene of fire that gutted down the timber dealership of the Gikomba market and nearby homes in central Nairobi, Kenya June 28, 2018. REUTERS/Thomas Mukoya