VENICE, Italy (AP) — One of only four oar makers for Venice’s famed gondoliers, Paolo Brandolisio wades through his ground-floor workshop for the third time in a week of record-breaking floods, despairing of any help from national or local institutions.

“If these phenomena continue to repeat themselves, you have to think about how to defend yourself,” he says. “Because the defenses that the politicians have made don’t seem to be nearly enough.”

“You have to think of yourself,” he repeats.

Venetians are fed up with what they see as inadequate responses to the city’s mounting problems: record-breaking flooding, environmental and safety threats from cruise ship traffic and the burden on services from over-tourism.

They feel largely left to their own devices, with ever-fewer Venetians living in the historic part of the city to defend its interests and keep it from becoming mainly a tourist domain.

The historic flooding this week — marked by three floods over 1.5 meters (nearly 5 feet) and the highest in 53 years at 1.87 meters (6 feet, 1 inch) — has sharpened calls to create an administration that recognizes the uniqueness of Venice, for both its concentration of treasures and its increasing vulnerability.

Flood damage has been estimated at hundreds of millions of euros (dollars), but the true scope will only become clear with time. Architectural masterpieces like St. Mark’s Cathedral still need to be fully inspected and damaged manuscripts from the Music Conservatory library treated by experts — not to mention the personal losses suffered by thousands of residents and businesses.

“I feel ashamed,” said Fabio Moretti, the president of Venice’s historic Academy of Fine Arts that was once presided over by Tiepolo and Canova. “These places are left in our custody. They don’t belong to us. They belong to humanity. It is a heritage that needs to be preserved.”

“These places are left in our custody…It is a heritage that needs to be preserved.”

The frustration goes far beyond the failure to complete and activate 78 underwater barriers that were designed to prevent just the kind of damage that Venice has endured this week. With the system not yet completed or even partially tested after 16 years of work and 5 billion euros ($5.5 billion) invested, many are skeptical it will even work.

“This is a climate emergency. This is sick governance of the city,” said Jane Da Mosto, an environmental scientist and executive director of the NGO “We Are Here Venice,” whose aim it is to keep Venice a living city as opposed to a museum or theme park.

Brandolisio, the oar builder, sees systemic lapses in the official response, including the failure of local authorities to organize services immediately for those in need, an absence filled by volunteers. That included both a network of students who helped clear out waterlogged property for those in need and professionals like water-taxi drivers who offered transport during the emergency.

For now, he is taking matters into his own hands.

To protect his bottega where he not only makes oars but carves ornamental oar posts for gondolas or as sculpture, Brandolisio said he will have to consider raising the floor by at least 20 centimeters and buying a pump — precautions he never previously deemed necessary.

“I think I will lose at least two or three weeks of work,” he said. “I will have to dry everything. Lots of things fell into the water, so I need to clean all the tools that can get rusty. I need to take care of wood that got wet, which I can’t use because it cannot be glued.” 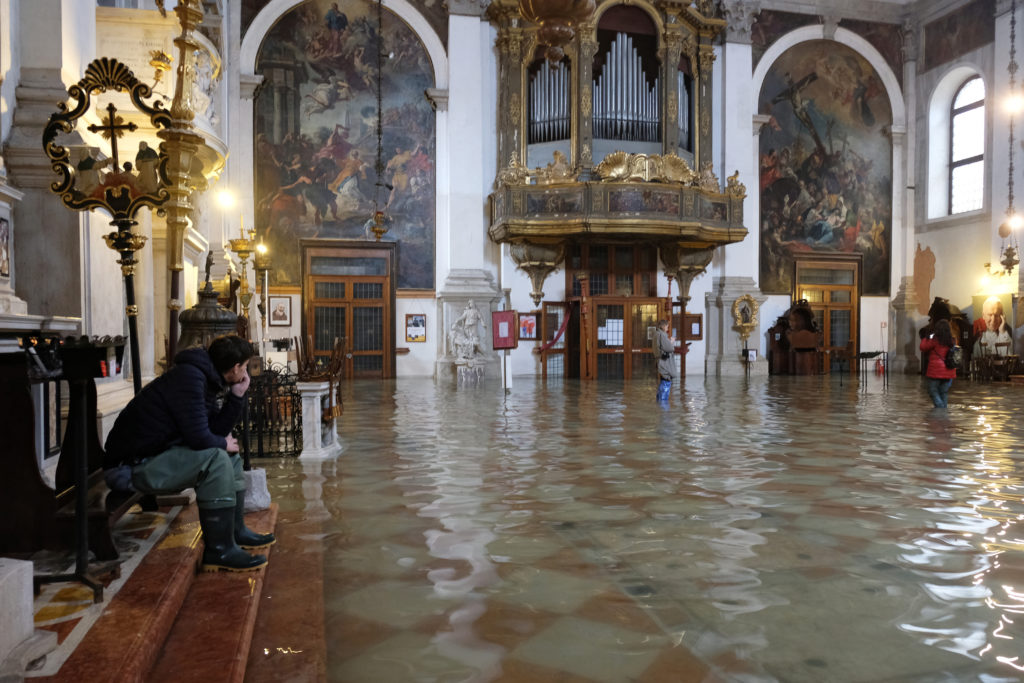 A flooded church is seen during a period of seasonal high water in Venice, Italy, November 17, 2019. Photo by Manuel Silvestri/Reuters

At the public level, proposals for better administering the city including granting some level of autonomy to Venice, already enjoyed by some Italian regions like Trentino-Alto-Adige with its German-speaking minority, or offering tax breaks to encourage Venice’s repopulation.

Just 53,000 people live in the historic part of the city that tourists know as Venice, down by a third from a generation ago and dropping by about 1,000 people a year. The population of the lagoon islands — including glass-making Murano and the Lido beach destination — is just under 30,000, and dwindling too.

That means fewer people watching the neighborhood, monitoring for public maintenance issues or neighbors in need. Many leave because of the increased expense or the daily difficulties in living in a city of canals, which can make even a simple errand a minor odyssey.

Activists also say local politicians are more beholden to the city’s mainland population, which has jumped to 180,000 people not directly affected, for the most part, by the same issues as the lagoon dwellers.

They are pushing for passage of a referendum on Dec. 1 that would give the historic center and islands their own administration, separate from that serving more populous Mestre and the industrial port of Marghera. Those areas were annexed to Venice by the Fascist dictator Benito Mussolini, and not necessarily a natural fit.

“It is precisely because we also have a climate emergency that this kind of thing is more important,” Da Mosto said.

“The only thing we can do for the climate is to prepare. That requires appropriate policies and investments and responsible engineering. And because the political context of Venice is so wrong, Venice doesn’t have a chance at the moment.”

Left: An Italian police officer patrols in a flooded street during a period of seasonal high water in Venice, Italy, November 17, 2019. Photo by Manuel Silvestri/Reuters