For Hundreds of Years, Cherry Blossoms Are Matter of Life and Death

After a chilly start to spring on the East Coast, cherry trees are in full bloom in Washington, D.C. But the trees’ pink and white blossoms are not just beautiful. They’ve been an evolving symbol of the nation of Japan for hundreds of years.

Most Japanese visit their country’s trees in groups for special cherry blossom viewings known as hanami. Students visit the trees taking a half or full day off from lessons. Neighborhoods organize their own viewings. Companies send their newest employees to stake out areas for corporate picnicking under the trees. When the flowers burst out of their buds, the Japanese people celebrate their New Year with food, dance and music, Emiko Ohnuki-Tierney, a Japanese-American anthropologist, explained.

Of the original 3,000 trees given to the U.S. by the people of Japan, only 100 still live on the National Mall. Learn about research geneticists are cloning the original trees. Photo by Cindy Huang/ NewsHour.

Ohnuki-Tierney walked with her class every year to view the cherry trees. Growing up in Japan, she didn’t search for any deeper meaning except their beauty. “In my childhood, I never thought about it,” she said. “Everyone just assumes the meaning,” which for Ohnuki-Tierney was purely aesthetic.

Only after becoming an anthropologist did Ohnuki-Tierney ask why the cherry blossom is such a revered symbol in Japan. Her research resulted with her book, “Kamikaze, Cherry Blossoms and Nationalisms.”

Held above all other flowers by the rulers of Japan, Ohnuki-Tierney writes the cherry blossom or sakura has been a symbol of “the cycle of life, death and rebirth, on the one hand, and of productive and reproductive powers, on the other” throughout the history of Japan. The trees have been used as symbols for everything from predicting successful harvests of rice to giving the World War II kamikaze pilots courage for their one-way missions.

Here is a history of the cherry blossom and its evolving meaning, from ancient Japan to current day.

Cherry blossoms are connected to Japanese folk religions, a symbol of reproduction and new life.

During this period, the Japanese begin to transplant cherry trees from the mountains to areas where people lived. The cherry trees were connected to beliefs in Japanese folk religions; many Japanese would go into the mountains during the spring to worship the trees. The trees were seen as sacred, since they were considered to carry the soul of the mountain gods down to humans.

Ohnuki-Tierney says that every spring, the mountain deity traveled down to the fields on the falling petals of cherry blossoms and transformed into the deity of the rice paddies, a critical crop for Japanese agriculture and productivity. Cherry blossom viewings, therefore, began from religious rituals.

712: First known written reference of the cherry blossom is recorded in the “Kojiki.” 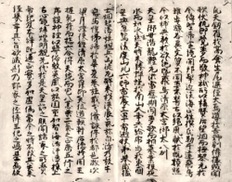 The “Kojiki,” a compilation of oral accounts of the origins of Japan, was commissioned by Empress Gemmei. The Tang Dynasty of China was at its height of cultural, economic and military influence. The empress, threatened by Chinese culture seeping into the country, sought to establish a unique Japanese identity that proved Japanese culture developed autonomous to other regions. Thus, the book described what came to be known as the “Japanese spirit.”

While the Chinese prize the plum blossoms, the aristocracy of Japan raised the cherry blossom to new status. The ritual of hanami — elaborate cherry blossom viewing ceremonies and celebrations with singing, dancing, and drinking — began at the imperial courts, practiced by elite classes, but commoners also celebrated in rural areas.

A samurai on horseback from the Momoyama period, at the turn of the 16th century.

Cherry blossoms exemplify the noble character of the “Japanese soul” — men who do not fear death.

Yoritomo and the Minamoto clan seized power from the aristocracy establish a military government in Kamakura. Minamoto no Yoritomo defeated other powerful Japanese families to seize control of certain functions of the government and aristocracy. Minamoto then established a feudal system, with a private military known as the samurai who also had some political powers.

Constantine Vaporis, professor of history at University of Maryland, Baltimore County, says that as seppuku (ritual suicide) became a key part of the samurai’s Bushido code, the samurai “identified with the cherry blossom particularly because it fell at the moment of its greatest beauty, an ideal death.”

The daimyo (or warlord) Asano Naganori captured this sentiment before committing ritual suicide:

“Sadder than blossoms swept off by the wind, a life torn away in the fullness of spring.”

Vaporis also said that the Samurai decorated their military equipment with emblems of the cherry blossom, especially sword guards. 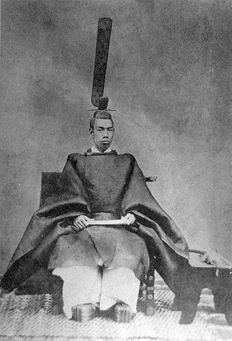 Emperor Meiji in 1872, only four years after he restored the position of emperor as the sovereign authority of Japan. Silver print by Uchida Kuichi/Wikimedia Commons.

Cherry trees reflect the sacrifice of Japanese soldiers in service to the state of Japan.

Emperor Meiji reclaimed all the governing authority from the position of the shoguns (military leaders) and asserted that the emperor held supreme authority, establishing the Empire of Japan.

The samurai lost their social status and privileges. After universal conscription, a new Japanese imperial army was created and all of its soldiers were bestowed with the Japanese spirit or soul, which Ohnuki-Tierney documents as “an exclusive spiritual property of the Japanese that endowed young men with a noble character, enabling them to face death without fear.”

Ohnuki-Tierney writes that these soldiers were told: “You shall die like beautiful falling cherry petals for the emperor.” This idiom was only one part of the new Empire of Japan’s imperial nationalist goals and guided Japanese colonial efforts.

Cherry blossoms are planted at the Yasukuni Shrine, a memorial specifically devoted to fallen soldiers since the Meiji period that the emperor visits occasionally. The cherry blossoms were supposed to console the souls of the soldiers.

The trees given to the American people were planted along the Tidal Basin in Washington, D.C., which is adjacent to the National Mall. Photo by NewsHour.

The Japanese government sends cherry trees to Washington on behalf of the people of Japan. The gift came after William Howard Taft was elected president and took office. Prior to the presidency, Taft served as the Secretary of War; he visited Japan and met with the prime minister so that they could affirm each other’s stakes and claims to colonized regions in Asia.

Japan has given cherry trees to many other countries besides the U.S., including Brazil, China, Germany and Turkey.

1945: Thousands of kamikaze pilots fly to their deaths defending Japan.

A tokkotai or kamikazi plane with a cherry blossom painted on its side. Photo by Wikimedia Commons.

Nearing defeat, Japanese vice-admiral Onishi Takijiro launched kamikaze operations as a last ditch effort to save the Japanese homeland and the Japanese spirit. Tokkotai pilots affixed cherry blossom branches to their uniforms, with painted blossoms on sides of their planes.

The cherry blossoms at the Yasukuni Shrine no longer mourn for the souls of the Japanese. Each petal that fell was meant to represent each soldier who had died trying to protect the nation of Japan.

An aerial view shows debris that remained on the ground after a tsunami wave to have hit Hitachinaka. Photo by STR/AFP/Getty Images.

In the 2012 Oscar-nominated short documentary “The Tsunami and the Cherry Blossom,” a Japanese man reflects on the strength of the cherry trees to live on past the devastation. “This was all killed by the tsunami,” he told film director Lucy Walker. “But now, a month later, there are new shoots. The plants are hanging in there, so us humans had better do it, too.”

For many Japanese, the cherry trees were part of the life they knew prior to the renewal and rebuilding in the face of so much death and destruction caused by the earthquake and tsunami.