Fukushima Evacuees May Be Homeless for Months as Cleanup Continues 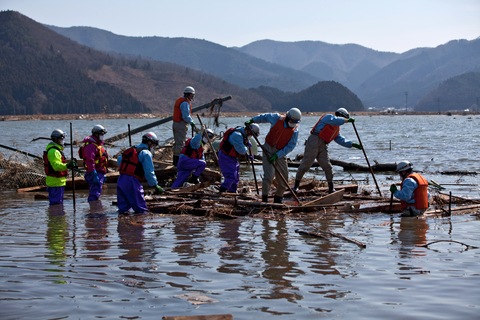 Japanese firemen pick through the rubble looking for bodies of victims of the tsunami in a flooded area of Ishinomaki in Miyagi prefecture on April 1, 2011. Thousands of Japanese and U.S. troops launched an intensive air and sea operation to recover bodies still left from the huge earthquake and tsunami three weeks ago. (Yasuyoshi Chiba/AFP/Getty Images)

As workers continued to contain radioactivity spreading from the damaged Fukushima Dai-ichi nuclear plant, Chief Cabinet Secretary Yukio Edano said those who had evacuated from the radius near the plant, many of whom were living in temporary shelters, would be facing a long time away before the area was safe. Tens of thousands of people have been displaced from the area.

“The evacuation period is going to be longer than we wanted it to be,” Edano said, pointing to the need to contain the reactor and the ensuing cleanup.

Prime Minister Naoto Kan said in a televised address that he expected “a long-term battle” at the Fukushima plant, but that he remained convinced that the crisis would eventually be brought under control.

Meantime, tests on groundwater near the reactors show high levels of radiation, raising concerns about the potential for unsafe radiation in tap water and on produce in the area. Vegetables from the agriculturally rich prefecture are already being carefully regulated.

More than 16,000 people remain missing after the earthquake and tsunami of March 11, and there are fears that many bodies will never be recovered. An estimated 15 to 18 million tons of debris remain strewn along the coast.