4:15 p.m.ET | NATO Secretary General Anders Fogh Rasmussen said NATO officials had agreed Friday to wind down their mission in Libya at the end of the month, a decision that will be formalized next week. Rasmussen said the seven-month mission showed that NATO was “indispensable” in addressing a threat to security. NATO launched nearly 10,000 strikes in support of Libyan rebels. 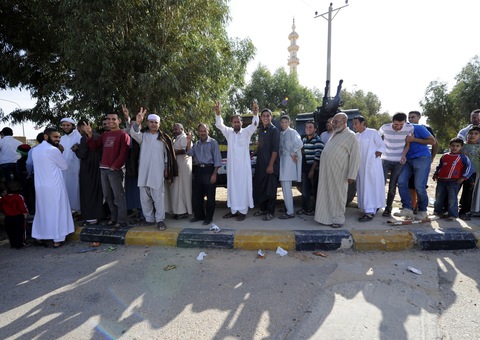 Libyans queue outside the cold storage room of a vegetable market to view the body of Moammar Gadhafi near a mosque in the outskirts of Misrata on Oct. 21, 2011. Photo by Philippe Desmazes/AFP/Getty Images.

11:50 a.m. ET | In Misrata Friday Gadhafi’s body remained stored in a commercial freezer as crowds gathered outside, waiting to view the body as officials debated how and where to bury his body.

The AP describes the scene:

The body, stripped to the waist and wearing beige trousers, was laid on a bloodied mattress on the floor of an emptied-out room-sized freezer where restaurants and stores in the center normally keep perishables. A bullet hole was visible on the left side of his head – with the bullet still lodged in his head, according to the presiding doctor – and in the center of his chest and stomach. His hair was matted and dried blood streaks his arms and head.

View a slide show looking back at Libya’s revolution.

The burial of former Libyan dictator Moammar Gadhafi, killed Thursday in Sirte, has been delayed pending an investigation into the circumstances of his death. His body was taken from Sirte to Misrata, where it was publicly displayed. Libyan officials are trying to decide where and how his body should be buried.

According to the Associated Press,

The transitional leadership had said it would bury the dictator Friday in accordance with Islamic tradition. Bloody images of Gadhafi’s last moments in the hands of angry captors have raised questions over his treatment minutes before his death. One son, Muatassim, was also killed, but the fate of Gadhafi’s one-time heir apparent Seif al-Islam was unclear.

Rupert Colville, a spokesman for the United Nations’ human rights office said an investigation should be conducted to determine the manner in which he was killed — and emphasizing that those accused of crimes should be tried, per international law. “Summary executions are strictly illegal. It is different if someone is killed in combat,” he said.

Meanwhile, NATO is looking to officially wind down its mission in Libya in a series of meetings Friday. In the past seven months, NATO carried out an estimated 10,000 strikes in support of anti-Gadhafi forces. In a statement on NATO’s website, Secretary General Anders Fogh Rasmussen said,

NATO and our partners have successfully implemented the historic mandate of the United Nations to protect the people of Libya. We will terminate our mission in coordination with the United Nations and the National Transitional Council. With the reported fall of Bani Walid and Sirte, that moment has now moved much closer.

On Thursday’s NewsHour, Margaret Warner talked to Richard Haass of the Council on Foreign Relations and former deputy Secretary of State James Steinberg about how the NATO mission will be judged.

The National Transitional Council has said it will officially announce the country’s liberation within days, a declaration delayed due to weeks of heavy fighting in Sirte and Bani Walid since the taking of Tripoli in August.

President Obama called Gadhafi’s death the “end of a long and painful chapter” for the people of Libya.

We’ll have more reaction and analysis on Friday’s NewsHour.