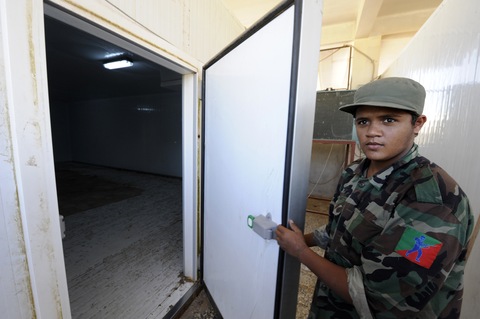 A Libyan National Transitional Council (NTC) fighter stands guard on October 25, 2011 outside the door leading into a market freezer in Misrata where Gadhafi’s body had been on display. Photo by Philippe Desmazes/AFP/Getty Images.

Libyan officials say the body of deposed leader Moammar Gadhafi and his son Muatassim were buried in an Islamic ceremony Tuesday at dawn, taken from a freezer unit in Misrata where they had been displayed for the public since Friday. Video footage showed several vehicles in a convoy believed to be transporting the bodies during pre-dawn hours.

National Transitional Council spokesman Ibrahim Beitalmal said the bodies were hidden in a secret location in order to thwart vandals as well as Gadhafi loyalists, according to the Associated Press.

The NTC had been unsure of what to do with the bodies since Gadhafi was killed last week, and the circumstances of his death have prompted international calls for an investigation after footage of a bloodied Gadhafi being captured in his hometown of Sirte emerged. Libyan officials claim he was killed in crossfire, not executed or intentionally killed while in opposition custody. 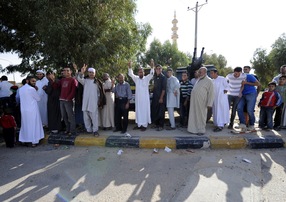 On Monday, NTC chief Mustafa Abdel Jalil said there would be an investigation but also implied that Gadhafi’s own loyalists might have killed him, not opposition forces who wanted to see him tried. “Those who had an interest in his speedy death were those who supported him,” so he couldn’t testify against them, Jalil said.

He also used the news conference to hint at next steps for the new government of Libya. According to the Washington Post, Jalil:

“assured the international community on Monday that ‘we are moderate Muslims.’ But he refused to back down from his surprise announcement Sunday that the country’s new laws will permit polygamy and ban the charging of interest on loans.”

That declaration signaled that the anti-Gaddafi forces may steer their new democracy toward stricter Islamic rule. Such a move may cause concern in the NATO countries whose air campaign crippled Gadhafi’s forces and facilitated the revolutionaries’ victory. Confusion reigned Monday over exactly what kind of laws might be adopted, and the country appeared set for an extended debate on the issue.”

Many are also calling on the interim government to investigate the discovery of several dozen bodies at a hotel in Sirte, reportedly of Gadhafi loyalists, that appear to have been executed. Some of the victims had their hands bound with plastic ties.

The New York Times said the NTC has “failed to establish a chain of command among the armed militias,” raising questions about how thoroughly the death of Gadhafi and his loyalists will be investigated:

The interim leaders, who declared the country liberated on Sunday, may simply have their hands full with the responsibilities that come with running a state. But throughout the Libyan conflict, they have also shown themselves to be unwilling or incapable of looking into accusations of atrocities by their fighters, despite repeated pledges not to tolerate abuse.

Jibril said over the weekend that Libya would see elections for a constitution-forming council within the next eight months.

Libyans queue outside the cold storage room of a vegetable market to view the body of Moammar Gadhafi near a mosque in the outskirts of Misrata on Friday. Photo by Philippe Desmazes/AFP/Getty Images.