Google’s email service appears to have been blocked by the Chinese government, renewing censorship concerns and further stressing an already contentious relationship between the Internet giant and China.

The recent clampdown has also prevented access for third-party email clients, such as Microsoft Outlook and Apple Mail, to Google’s mail service.

According to Google’s transparency reports, traffic to Gmail dropped sharply late Dec. 25th and remained near zero on Monday morning. 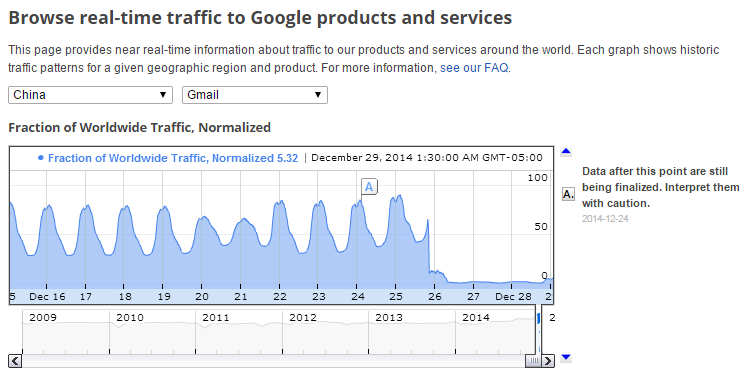 Internet analysis group Dyn Research tweeted that it confirmed an “IP-level” block of Gmail and that Chinese intervention was to blame.

“China has a number of ways they can block content,” Earl Zmijewski, Dyn Research’s vice president, told Mashable. “One of the crudest ways is to just block an IP address, and when you do that, you block all the content available at the IP.”

A Google spokesperson in Singapore told Reuters in an email, “We’ve checked, and there’s nothing wrong on our end.”

The Washington Post reported that Google Search has been blocked as well.

“Imagine if Gmail users might not get through to Chinese clients. Many people outside China might be forced to switch away from Gmail,” the anonymous GreatFire.org member added.

Google and China have had a years-long dispute over Beijing’s efforts to disrupt the country’s access to foreign services such as Gmail. Ahead of the 25th anniversary of China’s massacre of pro-democracy demonstrators in Beijing’s Tiananmen Square, several Google services were blocked.

In 2010, Google moved its servers from mainland China to Hong Kong, in an attempt to overcome government censors. The move angered Chinese officials, leading the Communist Party’s main newspaper to accuse the company of collaborating with U.S. spies.

Chinese Foreign Ministry spokeswoman Hua Chunying told reporters Monday that she was unaware of any disruptions to Google services.

“China has consistently had a welcoming and supportive attitude towards foreign investors doing legitimate business here,” she said. “We will, as always, provide an open, transparent and good environment for foreign companies in China.”

Left: The national flag of China flies in front of the former headquarters of Google in Beijing in July 2010. Photo by Jason Lee/Reuters