Only one gunman in Ottawa attack, Canadian police confirm

Updated at 10:25 p.m. EDT | Canadian authorities confirmed Thursday that the gunman, identified as Michael Zehaf-Bibeau, 32, was the only shooter in Wednesday’s attack in Ottawa, the Associated Press reported.

In a televised address Wednesday night, Prime Minister Stephen Harper called Zehaf-Bibeau a “terrorist.” “We will not be intimidated,” he said. “Canada will never be intimidated.”

Zehaf-Bibeau, who has a record of violent offenses, shot and killed Cpl. Nathan Cirillo on Wednesday, who was posted at the National War Memorial. The attacker then opened fire in the Parliament building where he was shot to death by ceremonial sergeant-at-arms Kevin Vickers, 58. Three other people have been treated with minor injuries.

The president said the motive for the shootings remain unknown following a meeting with members of his Ebola response team.

CBC News confirmed that the victim killed in the Ottawa shooting is Nathan Cirillo, a 24-year-old reservist “serving in Hamilton from the Argyll and Sutherland Highlanders of Canada regiment.”

Canadian officials have identified the gunman who was killed as Michael Zehaf-Bibeau, according to the Associated Press.

Updated at 2:30 p.m. EDT | The Ottawa Police released a statement at 1:45 p.m. EDT, confirming that the morning’s shooting resulted in the death of a Canadian forces member. In addition, the release stated that a male suspect in the shooting is deceased, and at this time there are no others in custody.

(Ottawa)—The Ottawa Police Service and Royal Canadian Mounted Police (RCMP) responded to reports of shooting incidents this morning in the downtown area. Police can now confirm that incidents occurred at the National War Memorial and on Parliament Hill.

Contrary to earlier reports no incident occurred near the Rideau Centre.

One shooting victim succumbed to injuries. He was a member of the Canadian Forces. Our thoughts and prayers are with him and his loved ones.

Next of kin notification is underway and as such, the victim’s identification will not be released.

One male suspect has also been confirmed deceased. There is no further update on injuries at this time.

This is an ongoing joint police operation and there is no one in custody at this time.

Ottawa residents are asked to stay away from the downtown area while the investigation continues. If you work in one of the downtown buildings, follow the instructions from the building management you are in.

A number of RCMP and Federal government buildings are also closed to the public; as is Ottawa City Hall and all Ottawa Police stations.

The Ottawa Police Service wants to speak to witnesses of today’s shooting incidents. Witnesses are to call Ottawa Police at 613-236-1222, ext 5493.

Those with tips regarding the shooting incidents, or those looking to report suspicious activity, can call 613-236-1222 or call 9-1-1.

Updated at 1:57 p.m. EDT | The Associated Press is reporting that Ottawa police say they believe there is more than one shooter. The police have also reported that the soldier who was shot and the suspect in the shooting have both died.

Updated at 12:41 p.m. EDT | A gunman shot a Canadian soldier standing at the National War Memorial in Ottawa on Wednesday, according to witnesses and police. More shots were fired inside the parliament building. 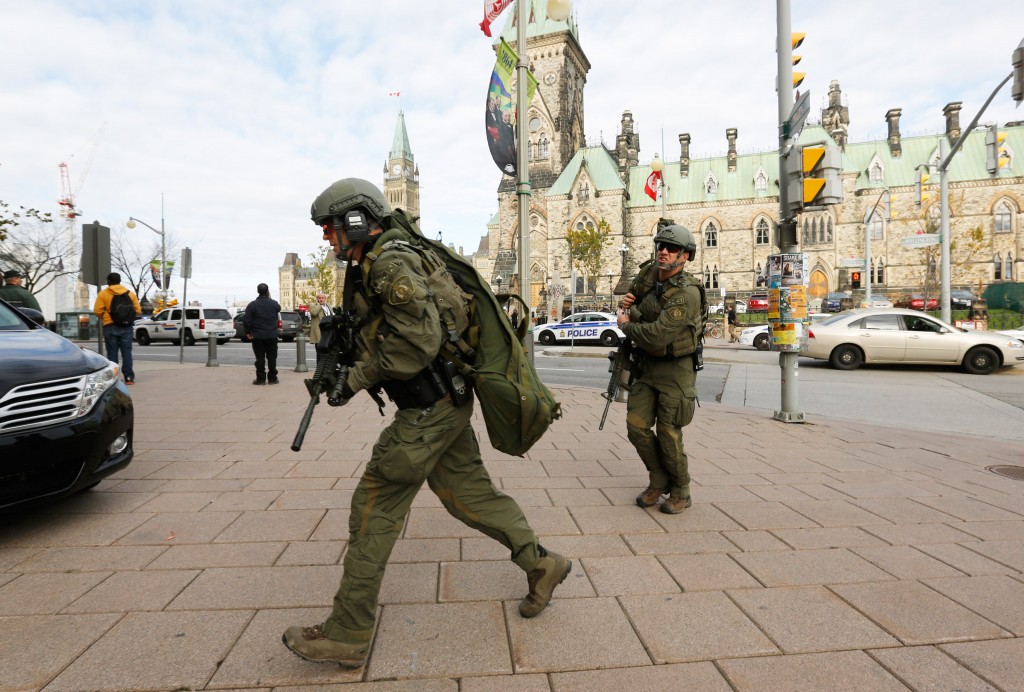 Police chased the gunman into the parliament building, where at least 30 more shots were heard. Parliament was locked down and Prime Minister Stephen Harper left the building safely. The wounded soldier was taken inside an ambulance for treatment.

Ottawa police Constable Marc Soucy said it was unclear whether there was more than one shooter.

The incident came days after a Canadian soldier was killed and another wounded in a hit-and-run car crash deemed a terrorist attack. The man driving the car in Quebec on Monday was fatally shot by police.

After the car crash, Canada raised its terrorism alert level from low to medium.

Left: A man adds a rosary to a memorial at the John Weir Foote V.C. Armouries in Hamilton, Ontario, Oct. 22, 2014 after a soldier believed to be from the base was killed in the attack in Ottawa. A gunman whose name was on a terror watch list killed a soldier and attempted to storm Canada's parliament before being gunned down in turn by the assembly's sergeant-at-arms. Photo by Geoff Robins/Getty Images