Islamic State fighters ransacked and bulldozed the centuries-old archaeological site of Nimrud in northern Iraq on Thursday, in what the head of the U.N.’s cultural agency decried as a “cultural cleansing” that amounted to a “war crime.”

It was the militant group’s latest assault on the ancient heritage of their conquered territories in Iraq and Syria, after smashing thousands of statues and torching the library in Mosul last month.

The Iraqi Ministry of Tourism and Antiquities announced the destruction in a statement on Thursday, but the extent of the damage has not yet been determined.

“The terrorist gangs of ISIS are continuing to defy the will of the world and the feelings of humanity after they committed a new crime that belongs to its idiotic series,” the ministry said in a statement on its Facebook page, according to the New York Times.

The ruins of Nimrud, located 20 miles south of Mosul on the banks of the Tigris River, date back to the 13th century B.C. They are all that remain of what was once the powerful capital of the ancient Assyrian empire.

Among the treasures of Nimrud are massive statues of the Assyrian protective deities known as “lamassu.” Last week, the Islamic State group released a video of its militants destroying one such statue, and more are believed to still be buried beneath the site.

“I cannot even describe the immensity of this loss,” said Ihsan Fethi, a member of the Iraqi Architects Society, to the New York Times. “This is one of the most famous and probably one of the most important sites in the world.” 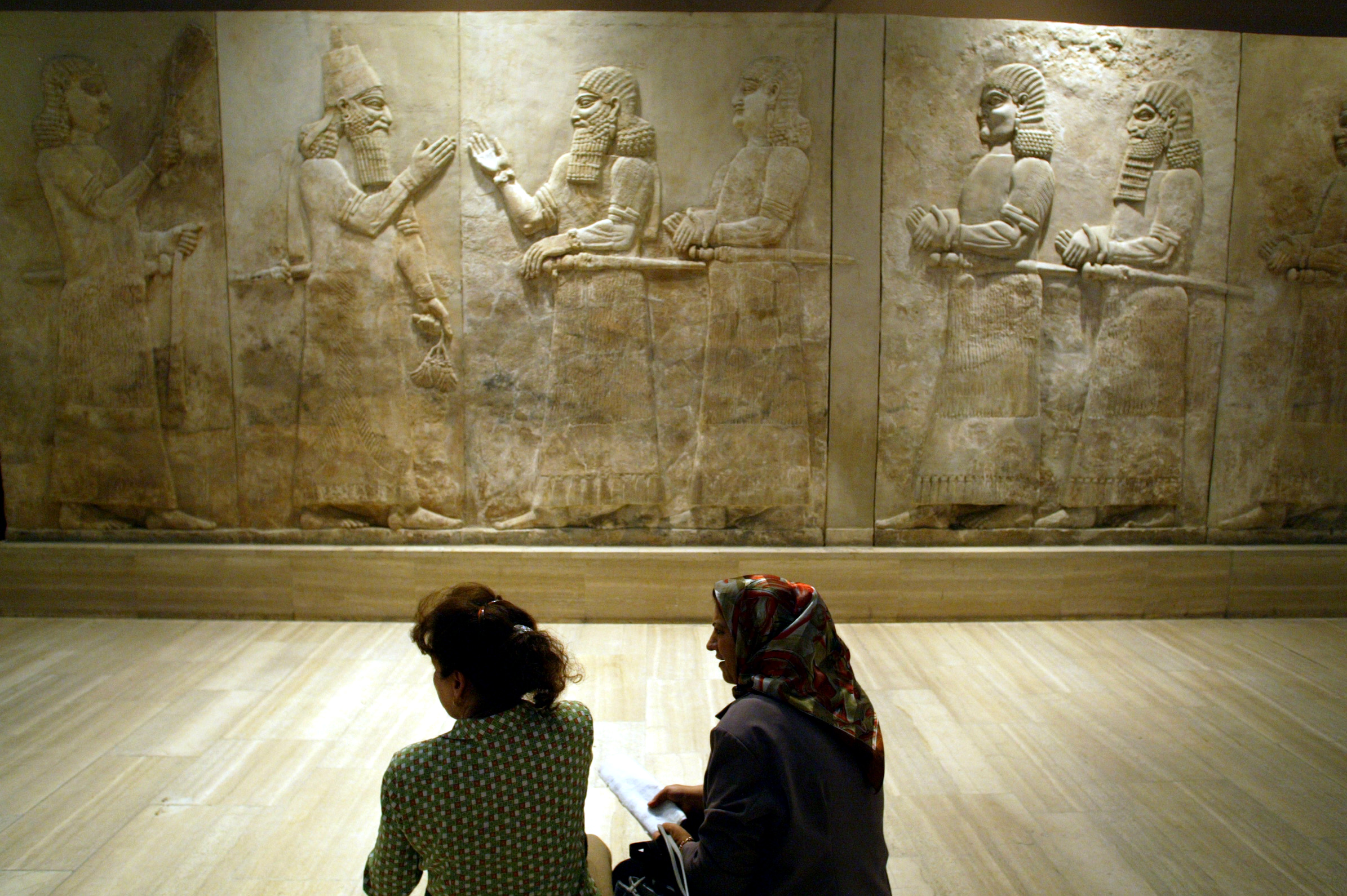 Two Iraqi women talk in front of Assyrian mural sculptures July 3, 2003, as the Baghdad museum briefly re-opened to display ancient Nimrud treasures. One of the most significant archaeological finds of the 20th century, the Nimrud treasures were destroyed by Islamic State militants, the Iraqi ministry announced Thursday. Photo by Radu Sigheti/Reuters

Nimrud had just recently been nominated by the Iraqi government for inclusion on UNESCO’s list of world heritage sites.

The Islamic State group, which controls a vast swath of territory stretching from Iraq to Syria, destroys statues and relics that it believes are “false idols” in its quest to establish a caliphate that lives by the edicts of 7th century Islamic law.

“Leaving these gangs without punishment will encourage them to eliminate human civilization entirely, especially the Mesopotamian civilization, which cannot be compensated,” the Iraqi ministry said in its statement.

The Iraqi Shiite cleric Ayatollah Ali al-Sistani called for unity against the onslaught of Islamic State forces in a Friday sermon, saying, “Day after day, the need is proven for everyone to unite and fight this ferocious organization that spares neither man nor stone.”

On Friday, Iraqi troops reached the outskirts of the IS-held town of Tikrit, positioning themselves for a battle to retake the city that will be a major test for the Iraqi army, Reuters reported.

Left: Photo of a lamassu (human-headed winged lion) in Palace of Ashurnasirpal II in Nimrud, Iraq, built around 870 BC. Photo by DeAgostini/Getty Images