HONG KONG (AP) — Supporters of Hong Kong’s pro-democracy movement created human chains on both sides of the city’s harbor Friday, inspired by a historic protest 30 years ago in the Baltic states against Soviet control.

They linked hands at first, then many switched on their smartphone lights and held them up to create a row of white lights against the nighttime skyline. Organizers hoped the chains, which traced three subway routes, would total 40 kilometers (25 miles) in length.

It was the latest protest in a nearly 11-week-old movement that began with calls to scrap a now-suspended extradition bill and has widened to include demands for full democracy and an independent inquiry into alleged police brutality at protests. 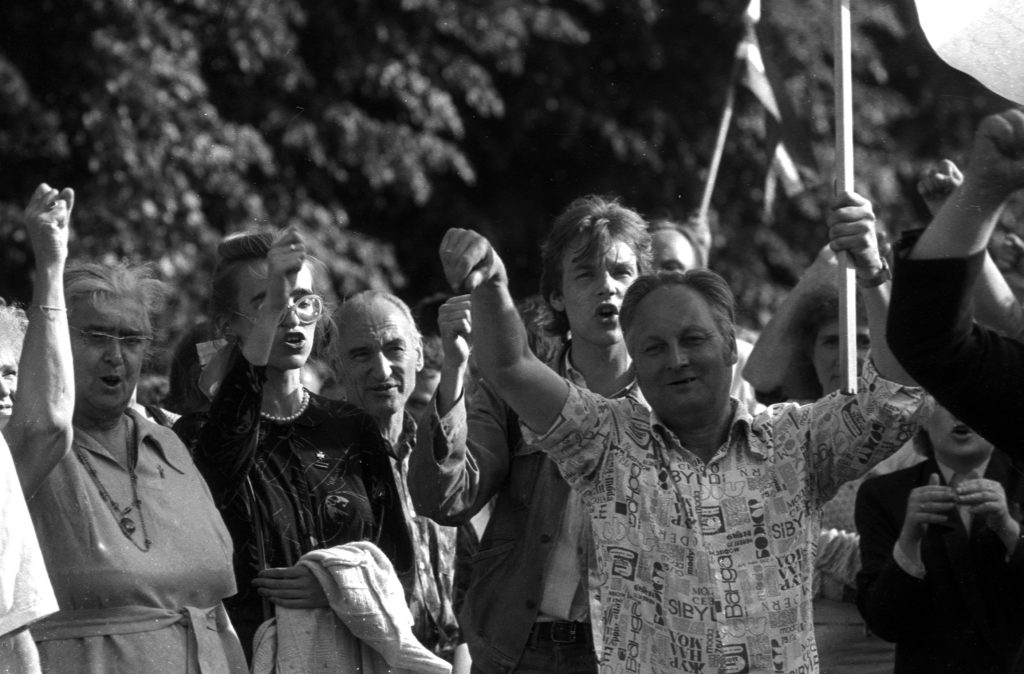 People hold hands as they participate in a human chain during the Baltic Way near Riga August 23, 1989. More than two million people in the Baltic countries of Estonia, Latvia and Lithuania joined hands in one of the biggest mass protests seen against the former Soviet Union and demanded the restoration of independence. Photo by Ints Kalnins/Files via Reuters 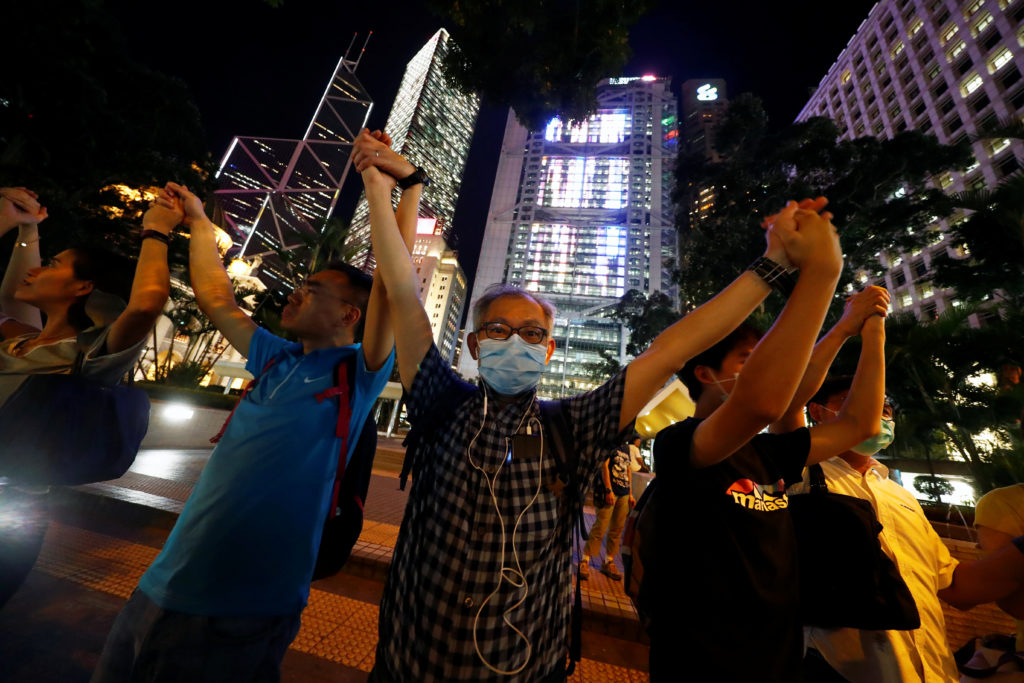 Organizers of “The Hong Kong Way” said it would “be a show of solidarity among people who are united against the extradition law and police violence, and a plea for international support.”

Earlier Friday, accountants in Hong Kong marched in support of the pro-democracy movement, while the Canadian Consulate banned its staff from leaving the city on official business after a British Consulate employee was detained in mainland China.

The head of the cabin crew union for Hong Kong airline Cathay Dragon said she had been fired in retaliation for supporting the movement, adding to the chill in the semi-autonomous Chinese territory.

The Canadian Consulate didn’t say whether the travel restriction on local staff was related to the detention of the British Consulate employee, Simon Cheng Man-kit. He went missing two weeks ago after going on a business trip from Hong Kong’s high-speed rail terminal to Shenzhen, a mainland city just across the border.

“At present, locally engaged staff will not undertake official business travel outside of Hong Kong,” the Canadian Consulate said in a statement.

During a daily briefing, Chinese Foreign Ministry spokesman Geng Shuang said China respects Canada’s decision, but countered it with a Confucius quote: “A gentleman is open and poised; a petty man is unhappy and worried.”

Geng elaborated that those who are “above board” will have their rights guaranteed in China, while people with “an ulterior motive to engage in illegal activities” may have to be “extremely cautious.”

Cheng had worked for the British Consulate since December 2017 as an international trade and investment officer for the Scottish government.

China said this week that Cheng is a Hong Kong resident who had been placed in administrative detention for 15 days for violating public order regulations. The Global Times, a Communist Party-owned nationalistic tabloid, reported that Chen had been detained for “soliciting prostitutes.”

China often uses public order charges against political targets and has sometimes used the charge of soliciting prostitution. Ou Shaokun, an anti-corruption activist, alleged in 2015 that he was framed by authorities in southern Hunan province who said they found him in a hotel room with a prostitute.

The U.K.’s Foreign and Commonwealth Office said it is urgently seeking further information about Cheng.

“Neither we nor Simon’s family have been able to speak to him since detention,” the office said. “That is our priority and we continue to raise Simon’s case repeatedly in China, Hong Kong and London and have sought to make contact with Simon himself.”

Geng, the foreign ministry spokesman, said Friday that Cheng’s case is merely a public security issue and not a “diplomatic matter.”

A few thousand accountants gathered in a city square around noon and marched to government headquarters, becoming the latest profession to back the movement publicly following rallies by lawyers, teachers and medical workers.

One participant, Sarah Wong, said accountants are usually quiet because they are focused on getting the numbers right, but they cannot remain silent anymore.

Kenneth Leung, a lawmaker who represents the accounting industry, said that the now-suspended extradition bill that sparked the protests would have affected accountants, because many of them have clients in mainland China and travel there.

The legislation would have allowed suspects to be extradited to the mainland to face trial.

“The profession as a whole needs to come out to express their concerns and grievances,” he said. 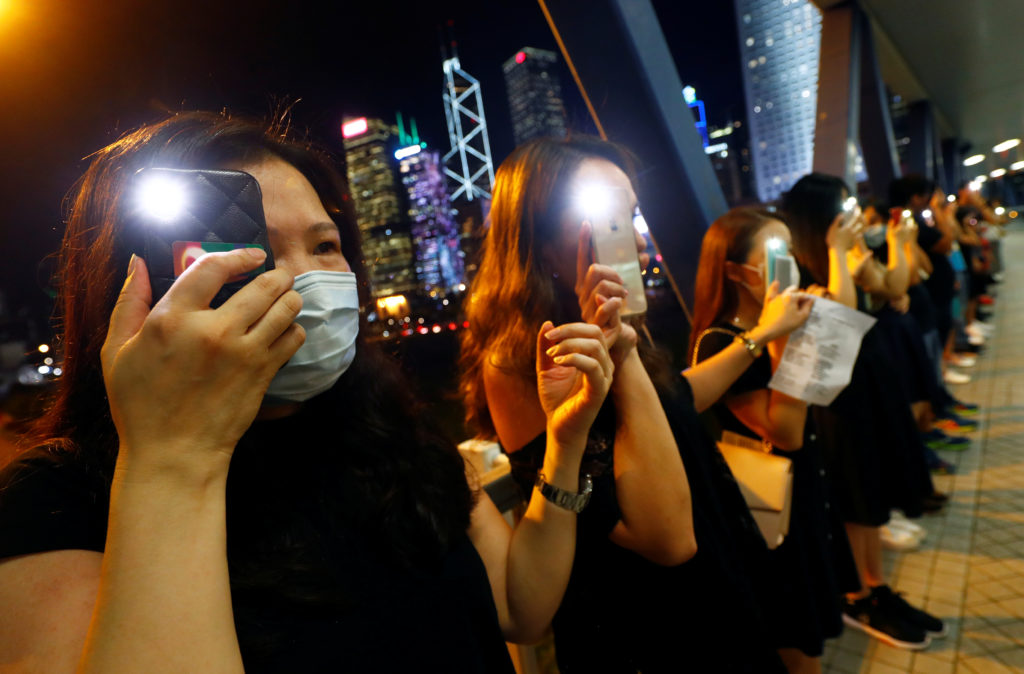 Protesters light up their smartphones as they form a human chain during a rally to call for political reforms in Hong Kong’s Central district, China, August 23, 2019. Photo by Kai Pfaffenbach/Reuters

Rebecca Sy, the airline union head, told a news conference that Cathay Dragon dismissed her without giving a reason, but that the firing came after she was pulled from a flight at short notice and asked by an airline representative to confirm that a screenshot from Facebook was from her account.

“It’s not just about the termination of the job, it’s also the whole issue, it’s terrifying. All my colleagues are all terrified,” Sy said. “I feel so sorry for them because I’m no longer in that position to protect them. I used to be the one to stand behind them, to back up all of my colleagues.”

Cathay Dragon is owned by Hong Kong’s main carrier, Cathay Pacific, which has come under pressure from Chinese authorities for employing people who support the protests. The company said in a statement that Sy’s departure “has nothing to do with her union leadership role or her union activities.”

The Hong Kong Confederation of Trade Unions called her firing a “blatant suppression and retaliation on her participation in the anti-extradition bill movement and her actions to mobilize her colleagues to participate as a trade union leader.”

The Canadian government updated its travel advice for China on Thursday to warn of stepped-up border checks on smartphones.

“Increased screening of travelers’ digital devices has been reported at border crossings between mainland China and Hong Kong,” the advisory said.

There have been reports that Chinese immigration officers are inspecting phones for photos related to the protests.