The continuing defiance came two days after Hong Kong leader Carrie Lam announced that her government will formally withdraw an extradition bill that sparked the demonstrations in June.

The proposed legislation would have allowed Hong Kong residents to be sent to mainland China for trial, and many saw it as a glaring example of the city’s eroding autonomy since the former British colony returned to Chinese control in 1997.

Protesters have taken up a new slogan, “Five key demands, not one less,” in response to Lam’s announcement. They also want an independent investigation into allegations of police brutality during the protests, the unconditional release of those detained, not labeling the protests as riots, and direct elections of the city’s leaders.

Students in blue school dresses held hands outside the Maryknoll Convent School, a Catholic girls’ school. They also wore surgical masks in the style of protesters who use them to conceal their identities and reduce the effects of tear gas. Alumni from various schools clad in the protesters’ trademark black also joined similar chains.

One young man in a shirt with his school’s emblem held up a placard that said “Freedom.” Other young people handed out fliers at metro stations to push their cause. A group of two dozen black-clad youths were seen running around the busy Wan Chai commercial area shouting “Freedom for Hong Kong.”

A subway station was shut during the evening rush hour after demonstrators staged a protest there against alleged police violence. Medical workers also rallied at the office of the hospital authority.

Another group was gathering at a public park near Hong Kong’s legislative complex late Friday, while protesters have announced plans to target the airport on Saturday. 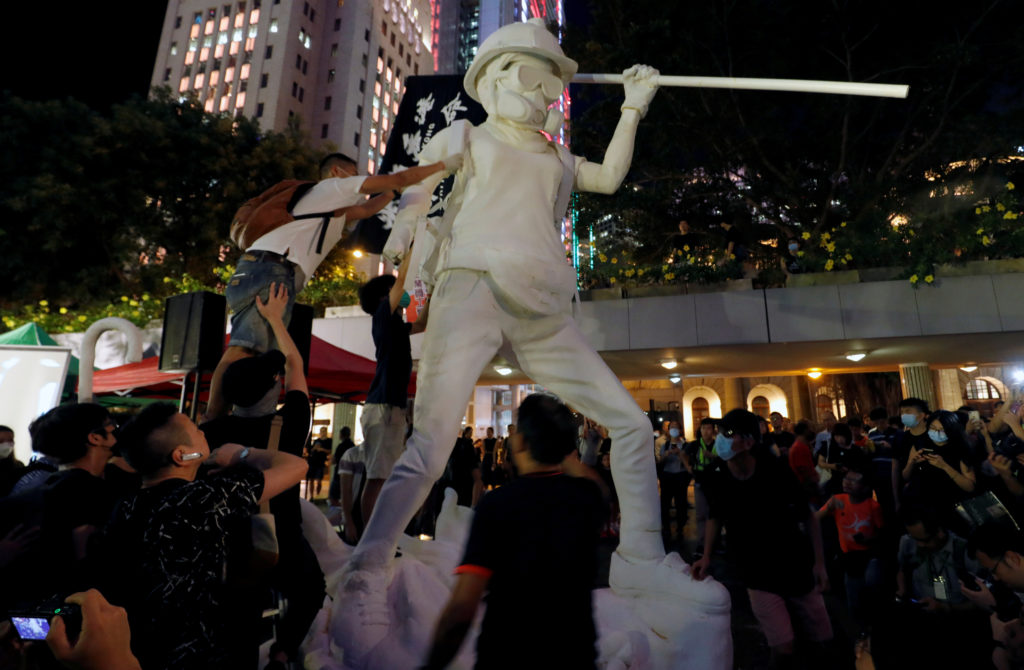 The unrest led ratings agency Fitch to cut Hong Kong’s credit rating on Friday, saying the turbulence has “inflicted long-lasting damage” to the territory’s image and that a degree of public discontent is likely to persist.

The ratings reduction was a new blow to Hong Kong officials, who are trying to boost an economy that was already slowing before the protests dented the territory’s tourism and retail industries.

Fitch also cited Hong Kong’s growing integration with the mainland, saying that could erode its autonomy under the “one country, two systems” framework under which it returned to Chinese rule.

Lam, who is in southern China for a visit, disputed the downgrade.

“We do not agree with Fitch Rating’s decision because based on what happened in the past months, nothing has undermined the ‘one country, two systems,” she said.

In Beijing, visiting German Chancellor Angela Merkel called Friday for the rights and freedoms of Hong Kong residents to be protected. Merkel, who met with Chinese President Xi Jinping and Premier Li Keqiang, said political dialogue — not violence — was the path toward a resolution. 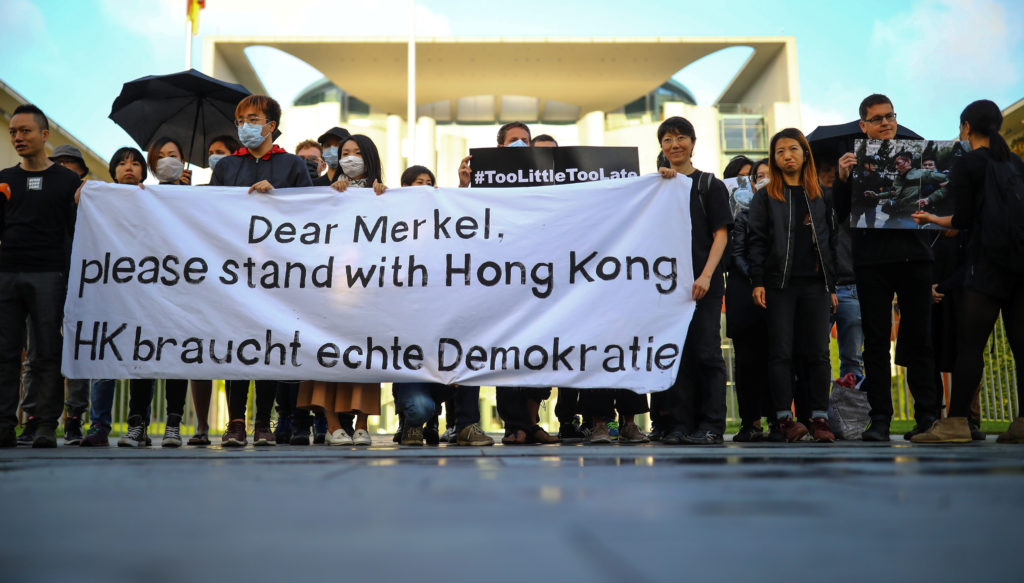 Activists protest for solidarity with Hong Kong’s protestors in front of Chancellery in Berlin, Germany, September 5, 2019. Photo by Hannibal Hanschke/Reuters

While the protest movement was triggered by the extradition bill, it has since shifted its target toward the police use of force. The authorities say they have used the minimum amount of force necessary to quell riotous demonstrations.

Lam has rejected the protesters’ other demands. She said a police watchdog agency investigating police misconduct was credible. Critics say the agency is led by her allies and doesn’t have the power to summon witnesses.

Left: Medical students hold hands and participate in a human chain during a protest against the police brutality at the Faculty of Medicine in The University of Hong Kong, China, September 5, 2019. Photo by Anushree Fadnavis/Reuters