The last person I expected to meet at a nursing home was a Playboy centerfold, but that’s what happened. Our story was about long-term care options for Americans and other expats living in Mexico. Before getting on the plane, I needed to find the right characters to help tell the story. I found a small assisted living and nursing home near the town of Jocotepec in the state of Jalisco run by Floridian, Ron Langley, and his Mexican wife, Sara Vega. Chatting with Ron by phone, he told me about Lakeside Care, his commitment to caring for the elderly, the food he serves and more. Then, at the very end of our conversation, he said, “Oh, by the way, one of our residents was Miss October 1964, a Playboy centerfold.” I knew I had to meet her. 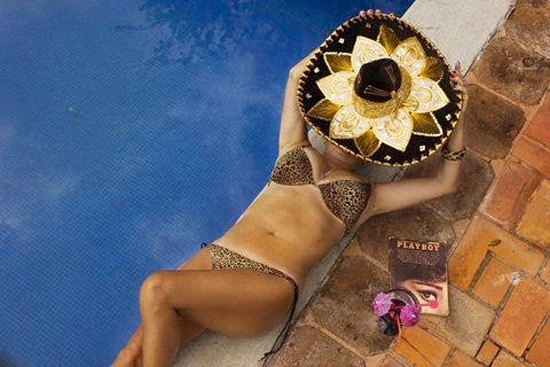 Rosemary Grayson told us she came to Lakeside Care after a near nervous breakdown. She said us she was “burnt out.” At the end of our interview, I had to know more about her backstory.

She was a student writing for her college newspaper at the University of Exeter in England when she came to New York for a visit. She told me how she ended up meeting Playboy publisher Hugh Hefner and becoming Miss October 1964, the first Playboy centerfold from the United Kingdom. The magazine gave her the name Rosemarie Hillcrest. It was the only time she posed. Later, Rosemary went on to work as a journalist for ITV in Britain and as a Justice of the Peace there. She’s 72 years old. She dresses impeccably and wears a small necklace with a Playboy bunny head that she said Hugh Hefner gave her.

Watch the full report on long-term care for expats in Mexico, below: