How a Japan-South Korea dispute ended a key intelligence pact

UPDATE: Since publication, South Korea has scrapped its intelligence sharing agreement with Japan–the latest in a trade and national security dispute which began last month. This decision threatens real-time information sharing between the U.S., Japan and South Korea to monitor North Korean nuclear activity. Tokyo officials called for official protest to South Korea’s “extremely regrettable” decision. The intelligence agreement was terminated in retaliation to Japan’s decision to delist South Korea earlier this month from a list of preferred trade partners, a move Seoul officials called a “grave” shift in the region’s security cooperation.

A feud between two American allies in Asia could endanger an intelligence sharing pact with the United States and hinder regional efforts to monitor North Korea, which has ramped up its missile tests over the last month.

Tensions between Japan and South Korea have been mounting over trade and intelligence disagreements since early July. On Aug. 2, Japan removed South Korea from their list of preferred trade partners, called the “whitelist.” The Japanese government says that they “recently found that certain sensitive items have been exported to the ROK (South Korea) with inadequate management by companies.” The “sensitive items” were dual use chemicals. South Korea denied the accusation and retaliated last Monday by delisting Japan from its own whitelist. South Korea also threatened to leave the intelligence agreement — called the GSOMIA — by Saturday.

South Korea’s deputy national security advisor Kim Hyun-chong said at an Aug. 2 news conference that after Japan demonstrated a distrust of Seoul, his government would “take comprehensive response measures, including reviewing whether it’s right to maintain the sharing of sensitive military information.”

A State Department spokesperson told the PBS NewsHour that trilateral cooperation is a priority in order to combat aggression from South Korea’s and Japan’s northern neighbors. Russia and China recently flew fighter jets over disputed airspace between South Korea and Japan, and North Korean leader Kim Jong Un promised last Friday to build up “invincible military capabilities no one dare provoke.” North Korea has gone through six rounds of weapons testing since late July in reaction to joint military exercises and advanced weapons transfers between the U.S. and South Korea.

“If Japan chooses the path of dialogue and cooperation, we will gladly join hands,” Moon said in his address. 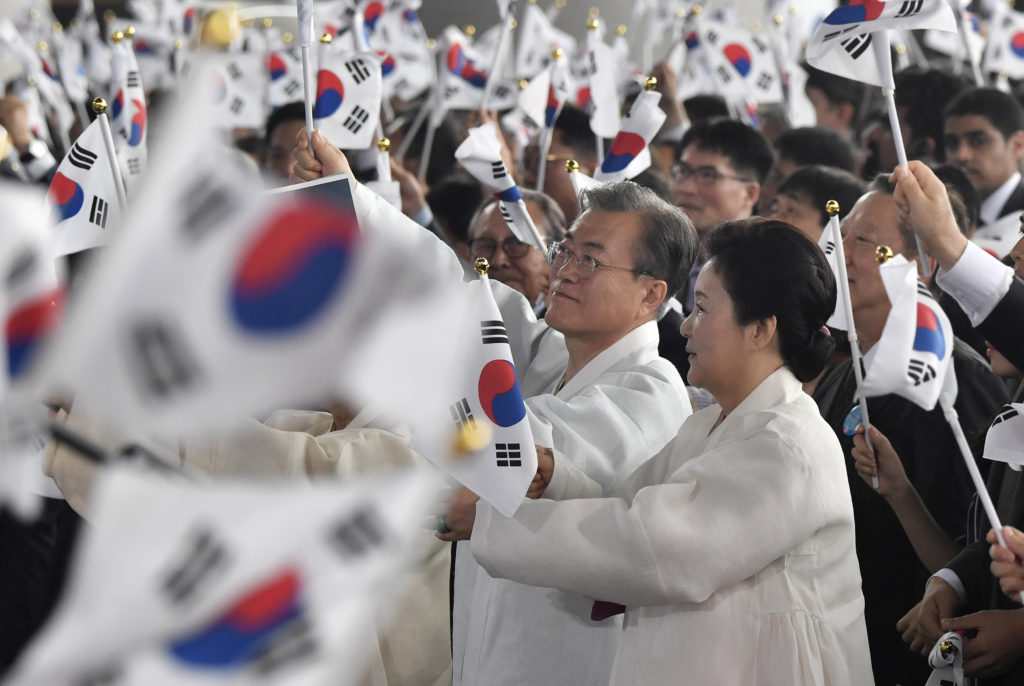 South Korean President Moon Jae-in and his wife Kim Jung-sook wave the national flags during a ceremony to mark the 74th anniversary of Korea’s liberation from Japan’s rule on Aug. 15, 2019. Photo by Jung Yeon-je/Pool via REUTERS

But Korean and Japanese officials say their positions have not changed despite what seems like an attempt at de-escalation.

“My impression was that President Moon’s speech was a message for fellow Koreans and was not aimed at talks with Japan,” said Takehiro Shimada, the Japanese Minister of Public Affairs.

Why South Korea and Japan are at odds

GSOMIA was signed in November 2016 to streamline intelligence sharing between the U.S., Japan and South Korea about North Korean nuclear activity. It automatically renews annually unless one of the countries decides to pull out by Aug. 24 of this year, giving 90 days notice before the renewal.

Before the GSOMIA, the U.S. had two separate intelligence sharing agreements with South Korea and Japan. Intelligence about North Korea would go through the U.S. first before reaching the other allies. This lagged process would be detrimental in a real-time conflict with North Korea, according to Sheila Smith, a Japan expert from the Council on Foreign Relations.

“Now that you’ve got the ballistic missile threat from North Korea, it’s really important to have real-time information sharing among all three partners,” Smith said. Without the agreement, “you leave room for even Russians and [the] Chinese to exploit these tensions.”

South Korean officials said that they are waiting for Tokyo’s response to Moon’s request for dialogue before making any decisions on leaving the GSOMIA, but that it is important to maintain the trilateral relationship.

Discussions about leaving the GSOMIA are only one facet of potential talks between Japan and South Korea. Mutual trade restrictions enacted over the last month, alongside an ongoing standoff over forced labor during WWII, would top the agenda if Tokyo agrees to meet with Seoul officials. 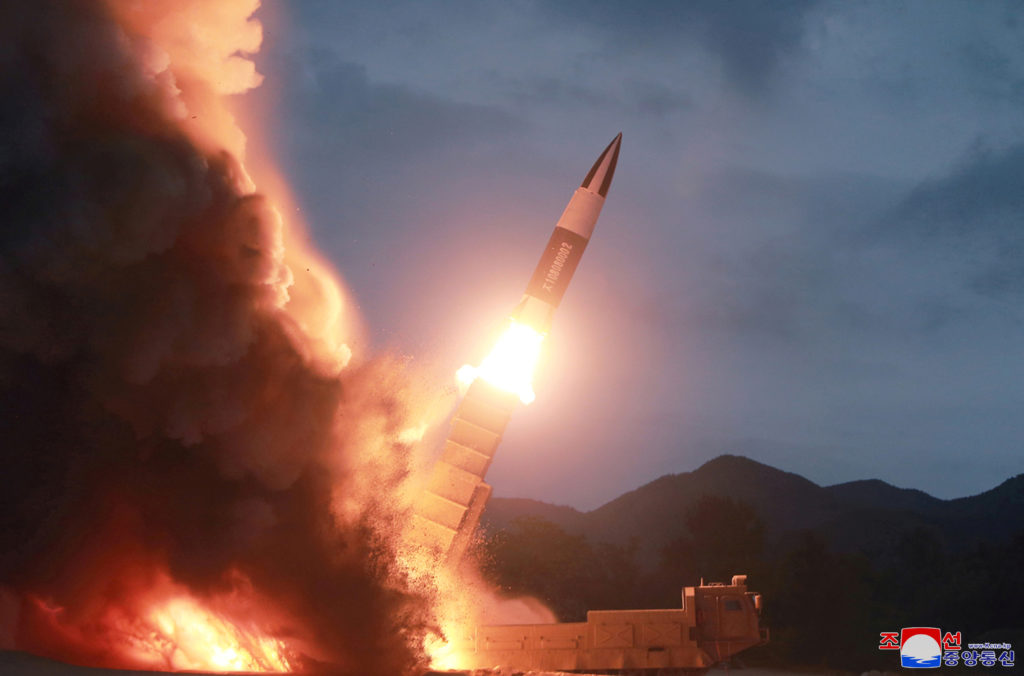 South Korea wants Japan to lift the restrictions it placed on three chemical imports: fluorinated polyimide, resist and high-purity hydrogen fluoride. They are used in the production of semiconductors and flat screens and are crucial for large South Korean tech companies like Samsung Electronics and SK Hynix. These chemicals can also be used to produce nuclear weapons.

Japan has accused South Korea of needing to be “more responsible with following trade protocol,” according to Shimada. Tokyo asserted that South Korea has made an illegal transfer of chemical material to North Korea, without offering evidence or independent verification.

South Korean officials say that Japan’s decision to delist the Republic of Korea and place trade controls were actually rooted in resentment over a recent South Korean Supreme Court decision requiring Japanese companies like Mitsubishi to pay Koreans forced into labor during WWII.

Japan maintains that the issue was resolved with the 1965 Claims Settlement Agreement that allocated $800 million to South Korea for the purpose of repayment to forced laborers. Japan says the decision to delist South Korea had nothing to do with the issue.

“The decision to delist South Korea was not about history. It was a message to the Koreans to be more responsible and follow trade protocol,” said Shimada.

In the past, the U.S. has facilitated dialogue between Japan and South Korea, but the Trump administration has appeared hesitant to engage when it comes to historical tensions.

In March 2014, former President Barack Obama attended a trilateral summit in the Netherlands to address regional nuclear proliferation, as well as compensating South Korean sex slaves who had been exploited under Japan’s colonial rule that ended in 1945. A month later, during a joint press conference in Seoul with then South Korean President Park Geun-hye, Obama pressured Japan to address what he called the “terrible, egregious violation of human rights.”

In December 2015, Japan and South Korea signed the “comfort women” agreement, which allocated $8.3 million to 55 survivors. Both the Japanese and South Korean governments considered it “final and irreversible,” according to the text of the agreement. 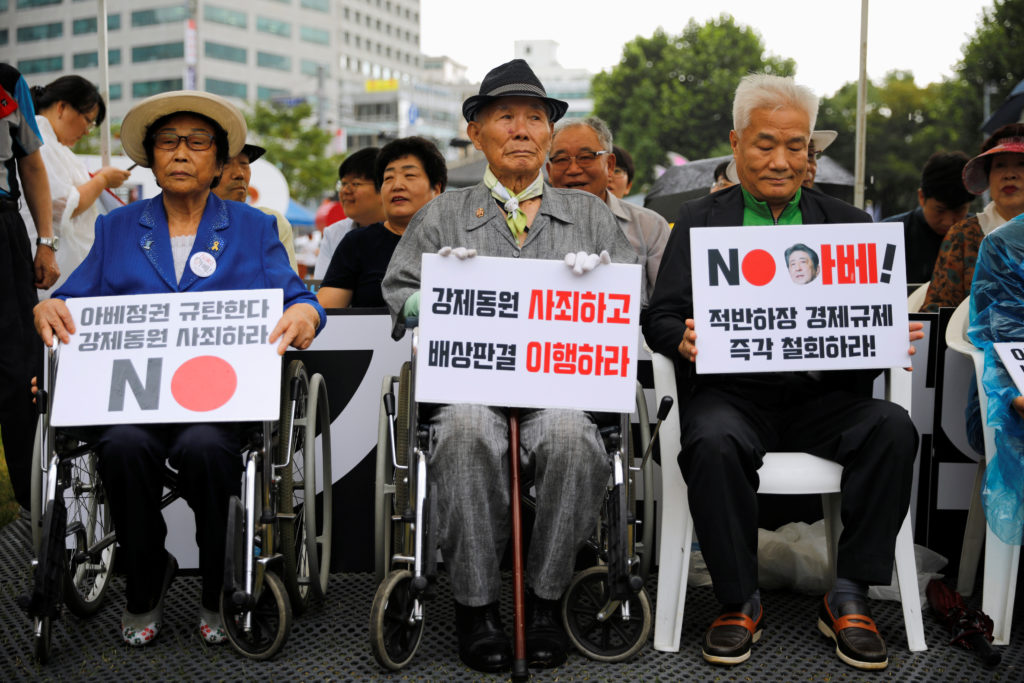 Lee Choon-shik, a victim of wartime forced labor during the Japanese colonial period, holds a banner that reads “Apologize for forced labour and fulfill the compensation” during an anti-Japan protest on Liberation Day in Seoul, South Korea, on August 15, 2019. Photo by REUTERS/Kim Hong-Ji

After Park was impeached in late 2016 and Moon elected in 2017, the new president changed course, saying the agreement “cannot solve the comfort women issue,” and later deemed it “defective.”

Since then, the U.S. has remained out of the conversation, in part because the Japanese government believes any issue with South Korea should be resolved without facilitation.

“We shouldn’t rely so much on another party like the U.S. to step in,” said Shimada, adding, “We should deal with this issue first hand with our South Korean counterpart bilaterally.”

But with the latest standoff, analysts like Sayuri Romei, a security and foreign affairs fellow at Sasakawa Peace Foundation USA, say that “Washington is currently in a very critical position.”

“The Trump Administration should take this dispute very seriously, because a worsening South Korea-Japan relationship will weaken the region further, opening some strategic opportunities for Beijing, Pyongyang, and even Moscow,” Romei said.

U.S. officials have made overtures of help amid the tensions. David Stilwell, the assistant secretary for East and Pacific Asia, said the U.S. will “do what we can” to help resolve the dispute during a mid-July visit to Seoul. In early August, Secretary of State Mike Pompeo encouraged the two countries to build a pathway forward, a sentiment that was reaffirmed by Defense Secretary Mark Esper.

“It’s like a full-time job getting involved between Japan and South Korea,” said President Donald Trump on July 19. “If they need me, I’m there.”

“I hope the U.S. is stepping in quietly to say [that leaving GSOMIA] is not the right target for displaying your unhappiness with Japan, especially now with North Korea being a threat,” said Mark Tokola, vice president of the Korea Economic Institute of America. “This is not the time to be trying to step away from it.”

**CORRECTION: This piece has been updated to show that Japan removed South Korea from their list of preferred trade partners, called the “whitelist,” because it claims “certain sensitive items have been exported to the ROK (South Korea) with inadequate management by companies.”

Bryan Wood is a News Assistant at the PBS NewsHour.