How to help communities affected by Hurricanes Eta and Iota

Two powerful hurricanes battered Central America in a matter of weeks, but the scope of the damage has taken longer to capture, as rescuers struggle to reach isolated communities.

Hurricane Iota, which made landfall on the Nicaraguan coast Nov. 16, caused more than 40 confirmed deaths across the region. The coastal city of Puerto Cabezas, also known as Bilwi, bore the brunt of the storm, which packed winds of up to 155 miles per hour. Government officials declared Iota the most powerful storm ever to strike the country.

Just 15 miles north of where Iota came ashore, another Category 4 storm made landfall about two weeks earlier on Nov. 3. Hurricane Eta triggered widespread flash floods and mudslides that killed at least 130 people and displaced thousands across the region.

In Guatemala, Eta’s rains triggered a massive landslide that buried dozens in the village of Quejá, in the central region of Alta Verapaz. Rescue efforts were called off after the remote area was deemed uninhabitable and declared a “camposanto,” or a sacred ground for the dead, according to Reuters. 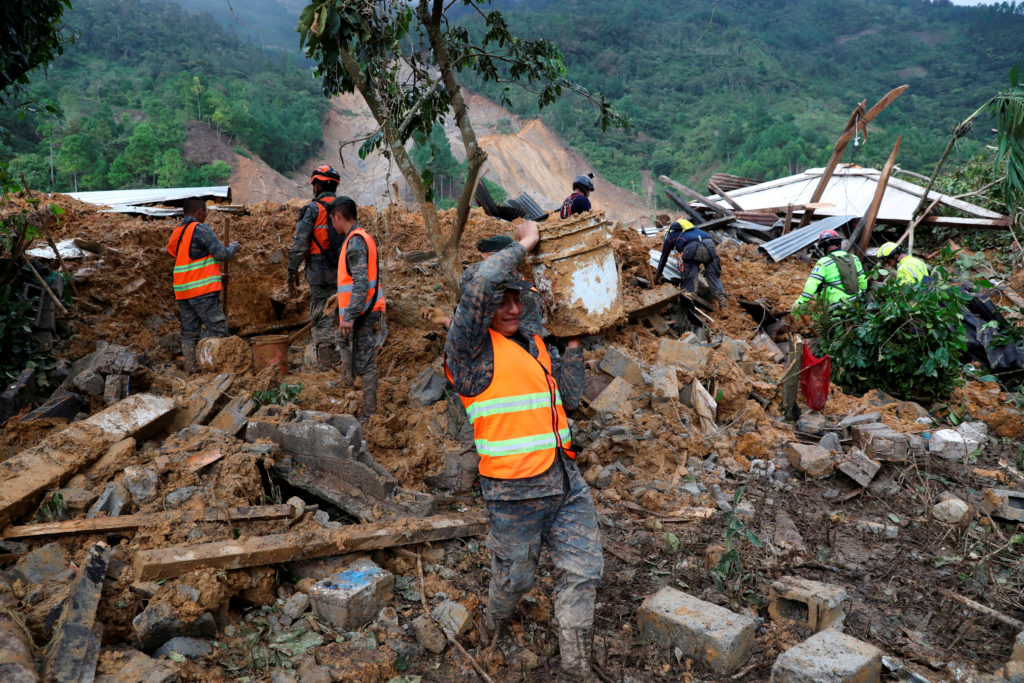 Soldiers remove debris and mud from an area hit by a mudslide, caused by heavy rains brought by Storm Eta, as the search for victims continue in the buried village of Queja, Alta Verapaz, Guatemala on Nov. 7, 2020. Photo by Esteban Bilba/EFE/Pool via REUTERS

Similarly, as Iota crawled further inland this week, its damage extended well beyond northeastern Nicaragua. Extreme flooding was reported in parts of already drenched Honduras, where tens of thousands of people had lost their homes earlier this month due to Hurricane Eta.

Many are taking shelter in San Pedro Sula, where the risk of contracting the coronavirus is complicating the response. The Honduran deputy minister said more than a quarter of 3,500 rapid tests done by local authorities had come out positive in shelters across the city, Reuters reported.

“We have had very difficult moments in recent hours. We are continuing with humanitarian work,” Honduran President Juan Orlando Hernandez said Wednesday. “It is crucial that people do not return [to their homes.] There are still places at risk.”

The storm was also blamed for two deaths in Panama and one in El Salvador. And Iota’s first death was reported on Colombia’s Caribbean island of Providencia, where the storm tore through as a Category 5 before reaching Nicaragua. Colombian President Iván Duque said in a news conference that 98 percent of its infrastructure was affected.

The full damage has yet to be assessed, but the path to recovery will be like no other, with the region now facing dual emergencies: the storms’ aftermath, as well as the health and economic impacts of the pandemic. Humanitarian agencies warn the strain could extend into the middle of next year.

Here are some organizations working to alleviate the crisis throughout the region, and others offering aid to specific communities in need.

Editor’s note: We have updated the story with another GoFundMe campaign. We verified organizations and fundraising campaigns to the best of our ability. If you aren’t sure about the legitimacy of a charitable organization, visit Charity Navigator.

Left: Residents remove debris from their destroyed houses after the passing of Hurricane Iota, in Puerto Cabezas, Nicaragua, on Nov. 17, 2020. Photo by REUTERS/Oswaldo Rivas