YANGON, Myanmar — Hundreds of students and teachers took to Myanmar’s streets on Friday to demand the military hand power back to elected politicians, as resistance to a coup swelled with demonstrations in several parts of the country, even in the tightly controlled capital.

In the largest rallies since the takeover, protesters at two universities in Yangon flashed a three-fingered salute, a sign of resistance borrowed from “The Hunger Games” movies, that they adopted from anti-government protesters in neighboring Thailand. They chanted “Long live Mother Suu” — a reference to ousted leader Aung San Suu Kyi, who has been detained — and “We don’t want military dictatorship.”

“We will never be together with them,” lecturer Dr. Nwe Thazin said of the military at a protest at the Yangon University of Education. “We want that kind of government to collapse as soon as possible.”

Resistance has been gathering steam since the military declared Monday that it would take power for one year — a shocking setback for the Southeast Asian country that had been making significant, if uneven progress, toward democracy after decades of military rule. The opposition began with people banging pots and pans outside their windows in Yangon, the country’s largest city — under the cover of darkness each evening to avoid being targeted. But now people are beginning to take to the streets, including students and medical workers, some of whom are refusing to work.

READ MORE: Myanmar, Burma and why the different names matter

Students have been central to previous protest movements against military dictatorship.

The military has tried to quash the opposition with selective arrests and by blocking Facebook to prevent users from organizing demonstrations. Facebook is the primary tool for accessing information on the internet for most people in Myanmar, where traditional media is state-controlled or self-censored because of threats of legal action by the state.

Despite that pushback, on Friday, about 200 people joined the protest at the Yangon University of Education, and a similar number marched at the city’s Dagon University, with many carrying papers printed with images of red ribbons — the symbol of the civil disobedience campaign that Suu Kyi’s party has called for.

Leading that march were four students carrying the party’s peacock-adorned red flag. At the student union, another held a sign saying, in English, “soldier back to barrack!”

“I believe we will have to lead this movement,” said student Min Han Htet. “All the people, including the students, will have to bring down the military junta. We will have to make sure that juntas never appear again in the next generation.” 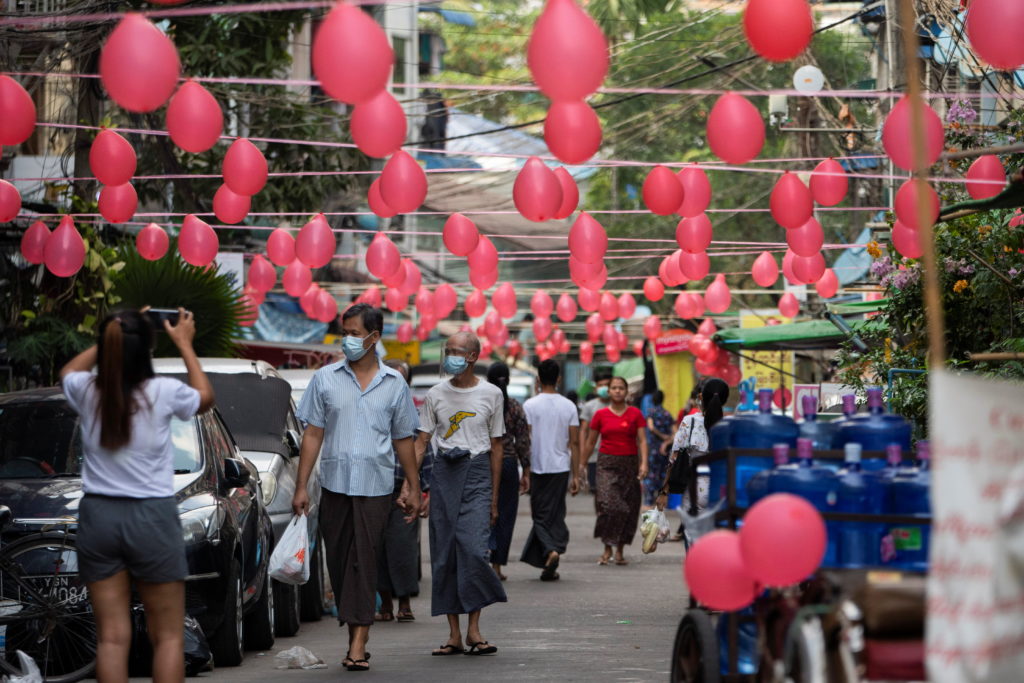 Shops are decorated with red balloons during a campaign against the military coup in Yangon, Myanmar. Photo by Reuters

The military’s takeover Monday began with the detention of senior government officials, including Suu Kyi, who was the country’s de facto leader. She is healthy and remains under house arrest at her official residence in the capital, Naypyitaw, party spokesman Kyi Toe said.

Win Htein, Suu Kyi’s longtime confidant, meanwhile, was taken from his home in Yangon to Naypyitaw, on Friday, according to Kyi Toe.

The 79-year-old had publicly called for civil disobedience to oppose the coup. He told Britain’s BBC radio in a phone call early Friday that he was being arrested for sedition, which carries a maximum penalty of life imprisonment.

There was also at least one demonstration Friday in Naypyitaw — highly unusual for city, which was purpose-built under the previous military government, has a heavy military presence and lacks the tradition of protest of the former capital, Yangon. Medical staff at the city’s biggest hospital gathered behind a big banner condemning the coup. Medical personnel have been at the forefront of the resistance.

According to Myanmar’s Assistance Association for Political Prisoners, at least 133 officials or lawmakers and 14 civil society activists were detained by the military in connection with its takeover, though some have already been released. The NLD has said Suu Kyi and ousted President Win Myint are being held on minor charges unrelated to their official duties — seen by many as merely providing a legal veneer for the military to detain them.

The takeover has been criticized by U.S. President Joe Biden and others internationally who pushed for the elected government to be restored.

“The Burmese military should relinquish power they have seized, release the advocates and activists and officials they have detained, lift the restrictions on telecommunications, and refrain from violence,” Biden said Thursday at the U.S. State Department in Washington, using Myanmar’s former name.

The U.N. Security Council, in its first statement on the matter, “stressed the need to uphold democratic institutions and processes, refrain from violence, and fully respect human rights, fundamental freedoms and the rule of law.” While the U.S. and others have described the military’s actions as a coup, the Security Council’s unanimous statement did not. 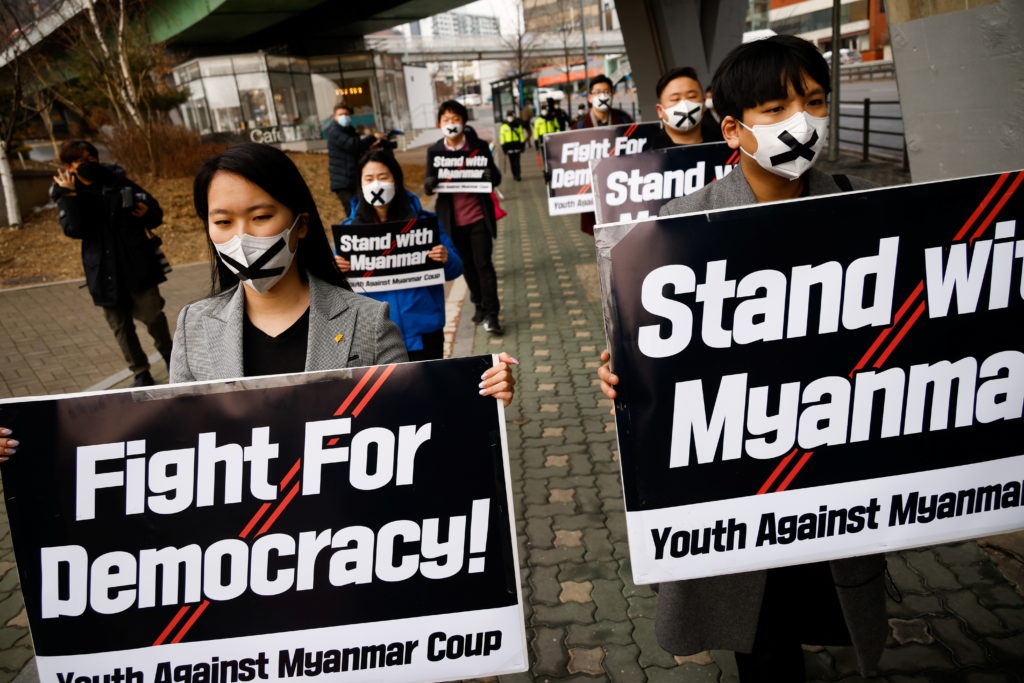 On Feb. 5, people march towards the Myanmar embassy during a protest in solidarity with Myanmar democracy in Seoul, South Korea. Photo by Kim Hong-Ji/Reuters

Protests against the coup were also held Friday in India, Indonesia and South Korea, sometimes led by people from Myanmar.

The military seized power shortly before a new session of Parliament was to convene, accusing Suu Kyi’s government of refusing to address allegations of voting irregularities in the election her party won in a landslide. The state election commission has said it found not evidence of fraud.

The military assumed all state powers and has formed a new election commission to investigate the fraud allegations. It has said it will hold a new election in a year and turn over power to the winner.

Myanmar was under military rule for five decades after a 1962 coup, and Suu Kyi’s five years as leader had been its most democratic period, despite continued use of repressive colonial-era laws.

Left: A woman wearing a red ribbon flashes the three-finger salute as she takes part in a campaign against the military coup in Yangon, Myanmar, on Feb. 5. Photo by Reuters