Worldwide, more than 340,000 children under age 5 died from diarrheal diseases in 2013 due to a lack of safe water, sanitation and basic hygiene. That’s 1,000 deaths a day, according to the UN’s statistics. What’s more, the No. 1 killer of children between the ages of one month to 5 years, pneumonia, can also be spread through a lack of hygiene.

Although much improvement has been made in the past decade to aid children across the globe, there are still alarming numbers who do not have access to clean water, proper sanitation or even just a way to clean their hands — especially after coming in contact with waste and feces.

“A gram of feces can contain ten million viruses,” said Sanjay Wijesekera, Chief of Water, Sanitation, and Hygiene, Programme Division at UNICEF. “Many diseases are transmitted by pathogens going from feces to food and fingers and so on, making children ill.” 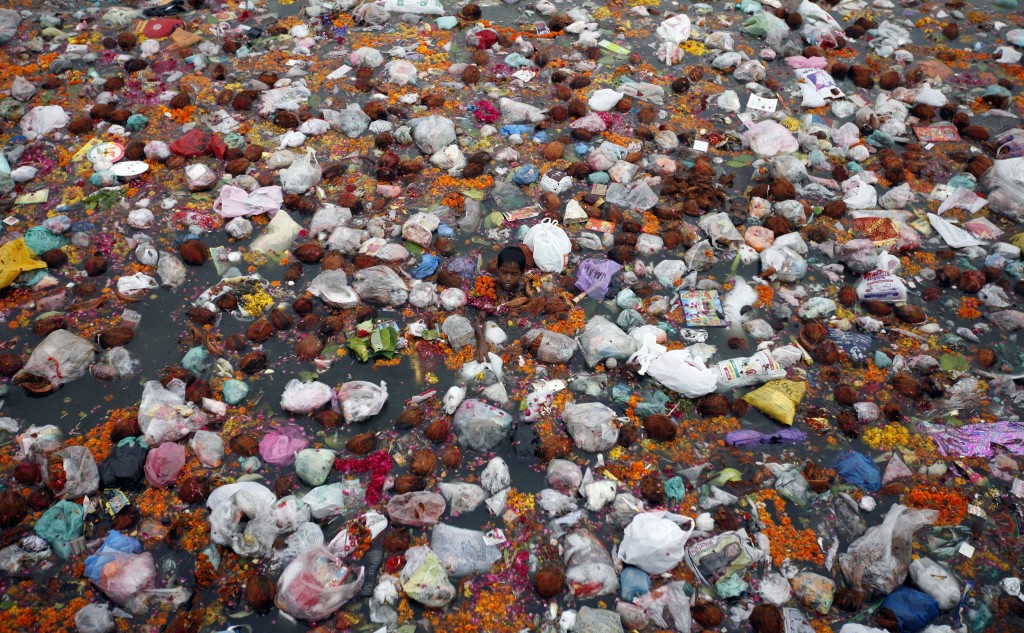 A boy swims in the polluted waters of the Sabarmati River to dive for offerings thrown in by worshippers in the western Indian city of Ahmedabad in 2010. Photo by Amit Dave/Reuters

One of the most basic hygiene problems that haunt developing communities is lack of adequate toilets. Around the world, about 2.5 billion people do not have proper toilets. Among them, 1 billion people defecate in the open — in fields, bushes and bodies of water — putting themselves and their community in danger of fecal-oral diseases, like hepatitis, cholera and dysentery.

Children are especially susceptible to these diseases when their home and “playgrounds” are overrun with rubbish and human waste. In countries throughout Asia, children can be seen swimming in polluted stagnant waters, digging through trash and playing amid toxic substances at landfills.

“When you have children running around barefeet, then coming in contact with excrete, it’s really easy to catch the worms and this of course impacts their development and growth,” said Dr. Aidan Cronin, Chief of the Water, Sanitation and Hygiene (WASH) program at UNICEF Indonesia. 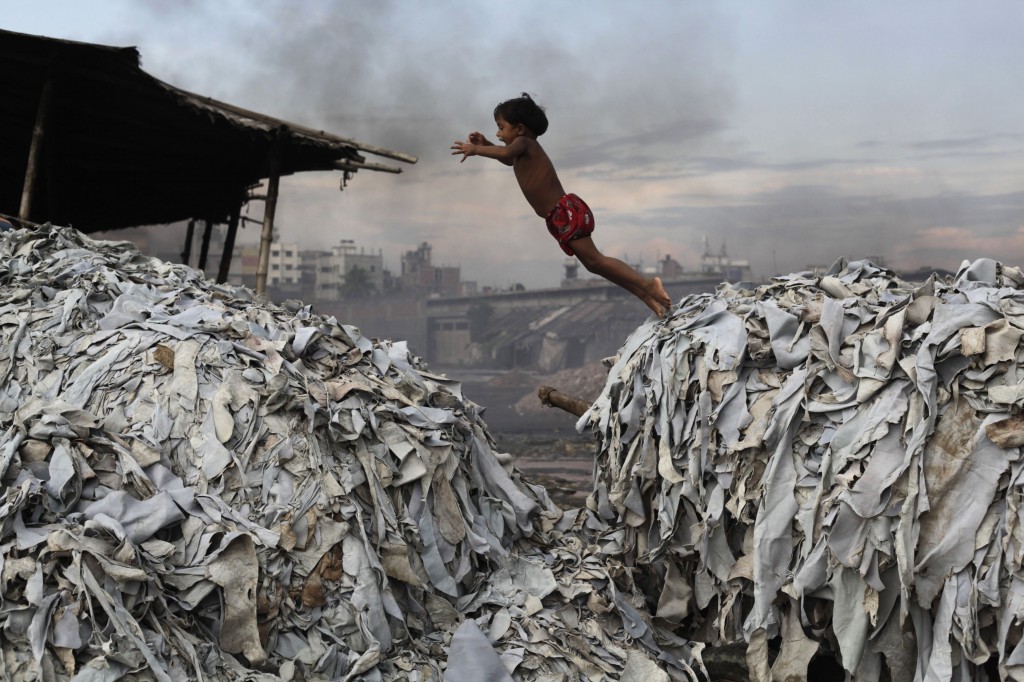 A child jumps on the waste products that are used to make poultry feed as she plays in a tannery at Hazaribagh in Dhaka, Bangladesh, in 2012. Luxury leather goods sold across the world are produced in this slum area of Bangladesh’s capital where workers, including children, are exposed to hazardous chemicals and often injured in horrific accidents. Photo by Andrew Biraj/Reuters

Reuters photographers have been capturing scenes like this for the past decade. But even some of the oldest photos in this series picture grisly scenes that, sadly, are still the reality in urban slums today.

Not only do these conditions promote the spread of deadly childhood diseases, another major health problem that affects children’s lives is stunting, often caused by malnutrition but also by intestinal worms and internal inflammation from fecal-oral contamination.

Stunting has become a huge obstacle for many children’s physical and cognitive growth, ultimately affecting their development and ability to learn. In Indonesia alone, nearly 9 million children suffer from stunting, said Cronin. 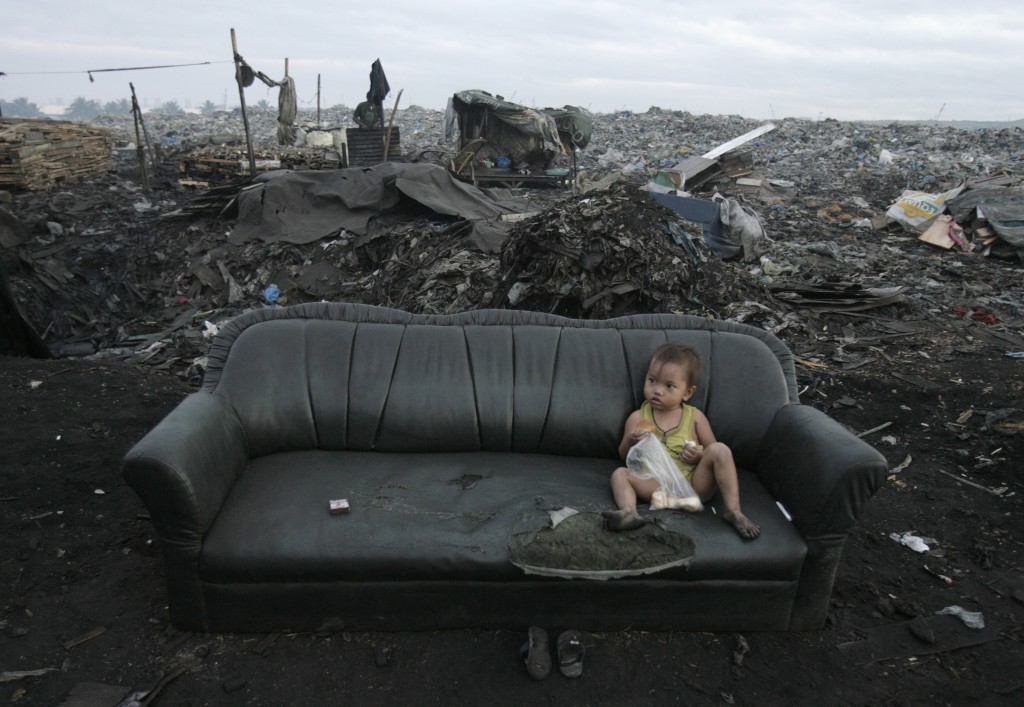 A child eats breakfast in a garbage dump, where hundreds of people live and make a living by recycling waste and making charcoal, in the Tondo section of Manila, Dec. 9, 2007. Photo by Darren Whiteside/Reuters

In Indonesia, UNICEF have recently launched a campaign called “Tinju Tinja,” which means “punch the poo” in Indonesian, in support of the Government’s five-year plan to have a completely open defecation-free country. In an attempt to engage the urban youth, the campaign has one of the local rock stars, Melanie Subono, literally fighting the “poo monster” as the main image to spearhead the campaign.

“It all starts from acknowledging that [open defecation] is a serious problem,” Cronin said. “The more you engage with communities and work with them with their specific issues, the more sustainable sanitation is.” 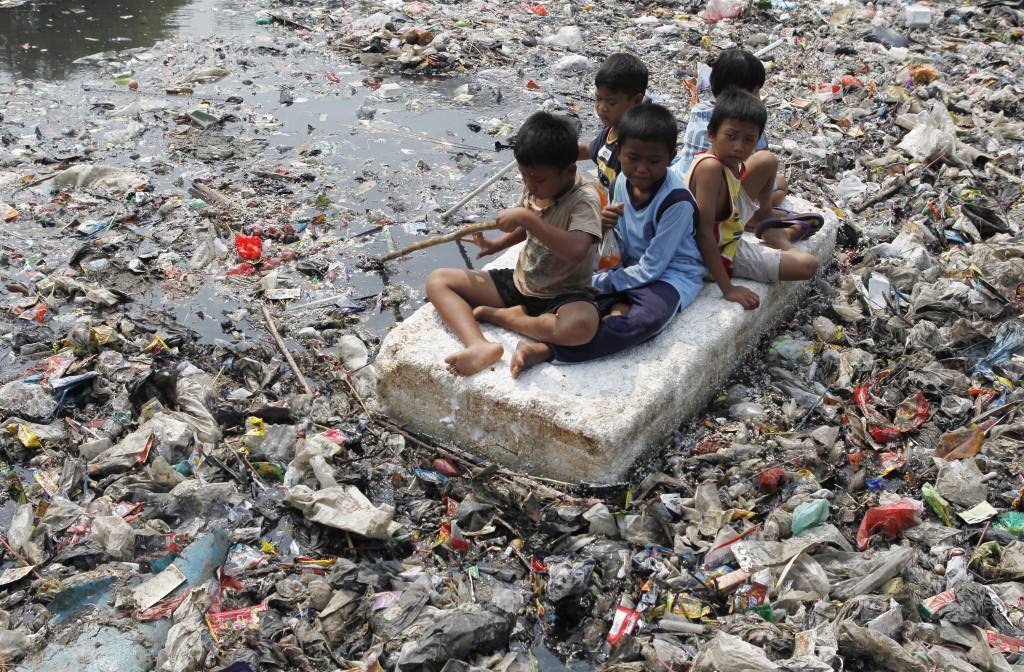 Children sitting on a makeshift raft play in a river full of rubbish in a slum area of Jakarta, Indonesia, in 2012. Photo by Enny Nuraheni/Reuters

One way to help children is through education and schools, said Dr. Jody Heymann, Dean of the UCLA Fielding School of Public Health and founding director of the WORLD Policy Analysis Center. A lot of progress has been made to make primary schools free and available for children around the world. In Indonesia, UNICEF works through primary schools to teach kids the importance of sanitation and hygiene by putting in clean toilets, hand washing stations and soap so that the kids can form a habit of cleaning.

“I think when we see [these] images, we should be asking not only ‘why isn’t there a playground? What’s leading them to the dump?’” said Heymann. “But the bigger question of what’s keeping them from being in school, gaining education that would give them lifelong opportunity.” 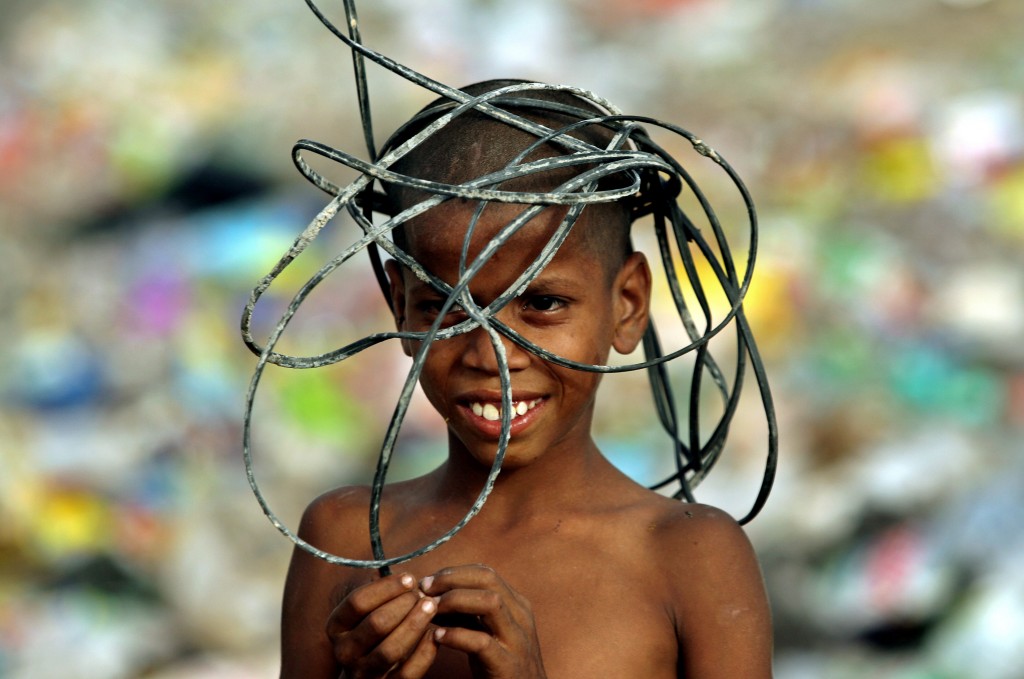 A boy looks on as he collects recyclable materials at a garbage dump in New Delhi in 2006. Photo by Adnan Abidi/Reuters 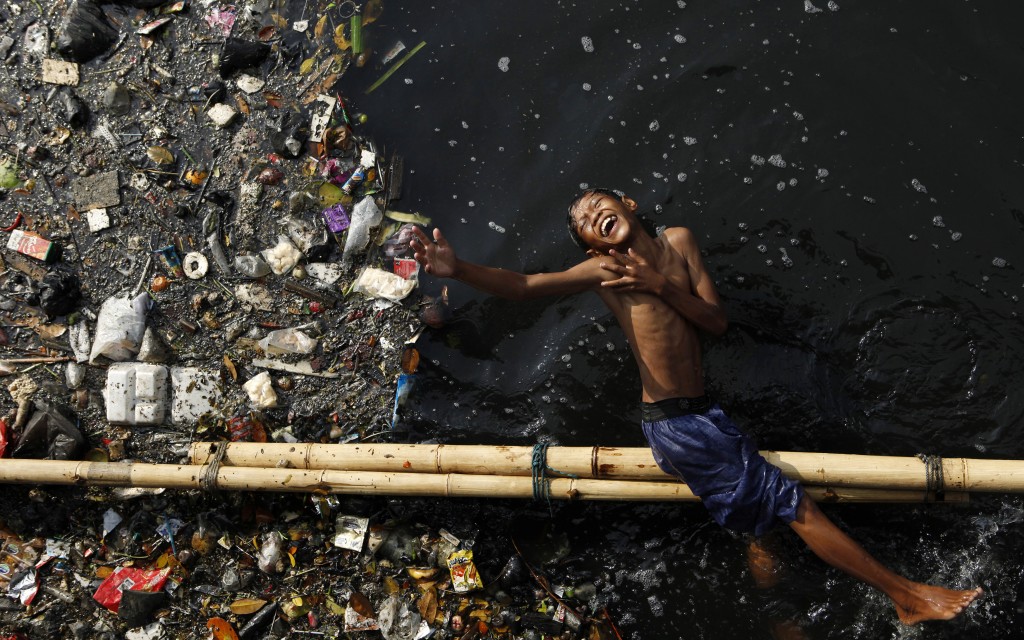 A boy plays in a polluted river after school at Pluit dam in Jakarta, Indonesia, June 5, 2009. Photo by Beawiharta/Reuters 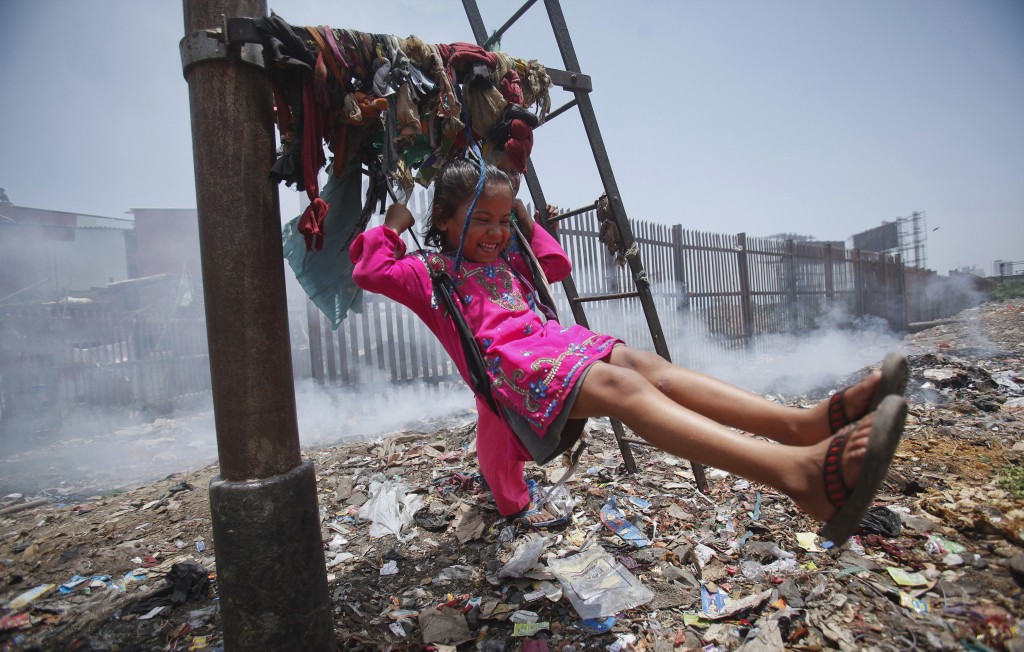 Sana, a 5-year-old girl, plays on a cloth sling hanging from a signalling pole as smoke from a garbage dump rises next to a railway track in Mumbai, India, in 2012. Photo by Vivek Prakash/Reuters 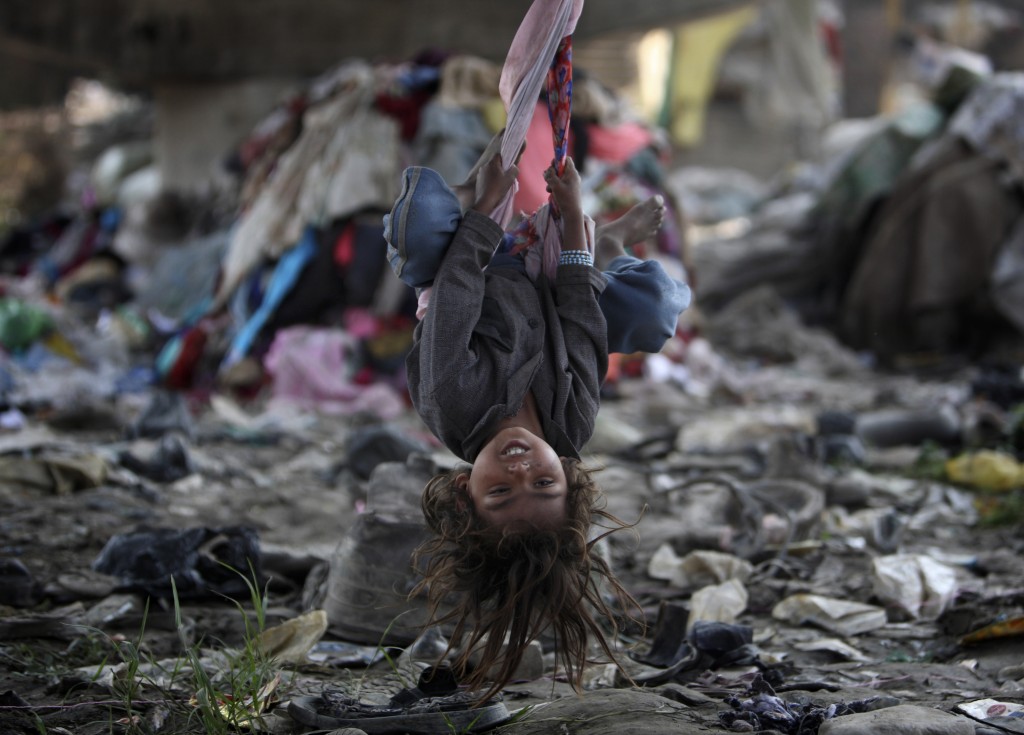 A child living in a slum plays on a swing under a bridge on the bank of Bagmati River in Kathmandu, Nepal, Oct. 17, 2011. Photo by Navesh Chitrakar/Reuters 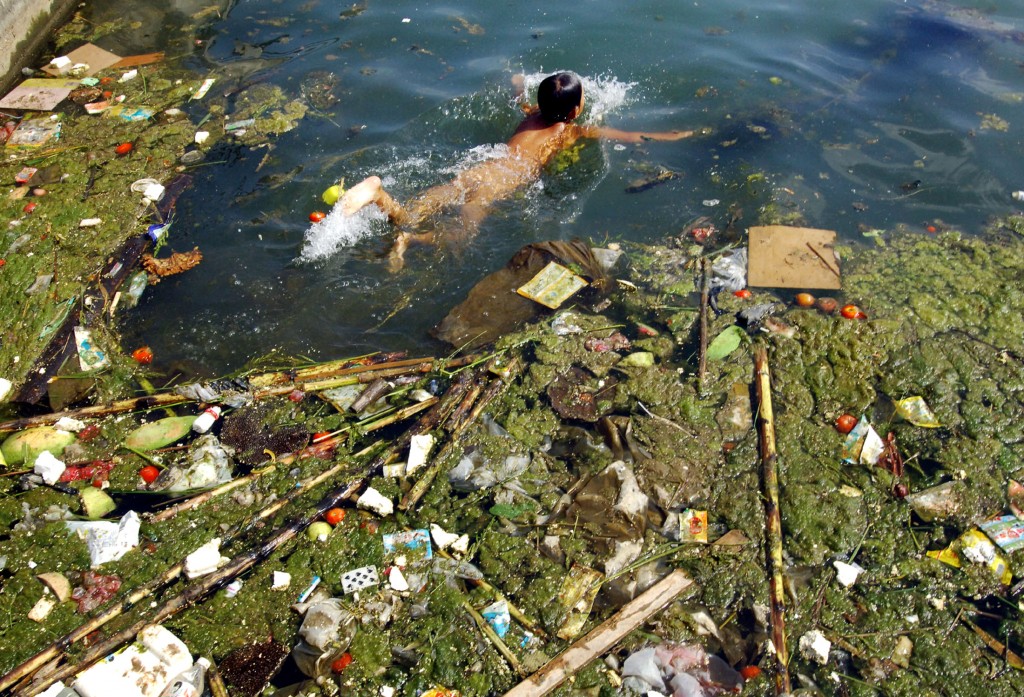 A child swims in a polluted reservoir in Pingba, in southwest China’s Guizhou province Sept. 2, 2006. Photo by China Daily/Reuters 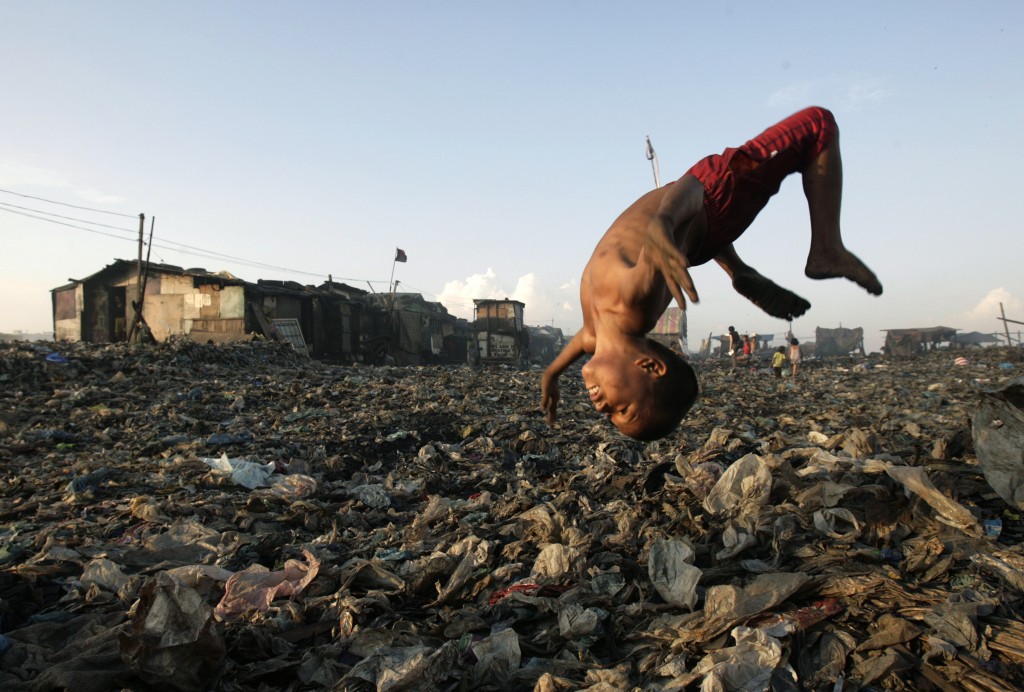 A boy plays at a garbage dump where hundreds of people stay and make a living out of recycling waste and making charcoal in the Tondo section of Manila, in 2007. Photo by Darren Whiteside/Reuters 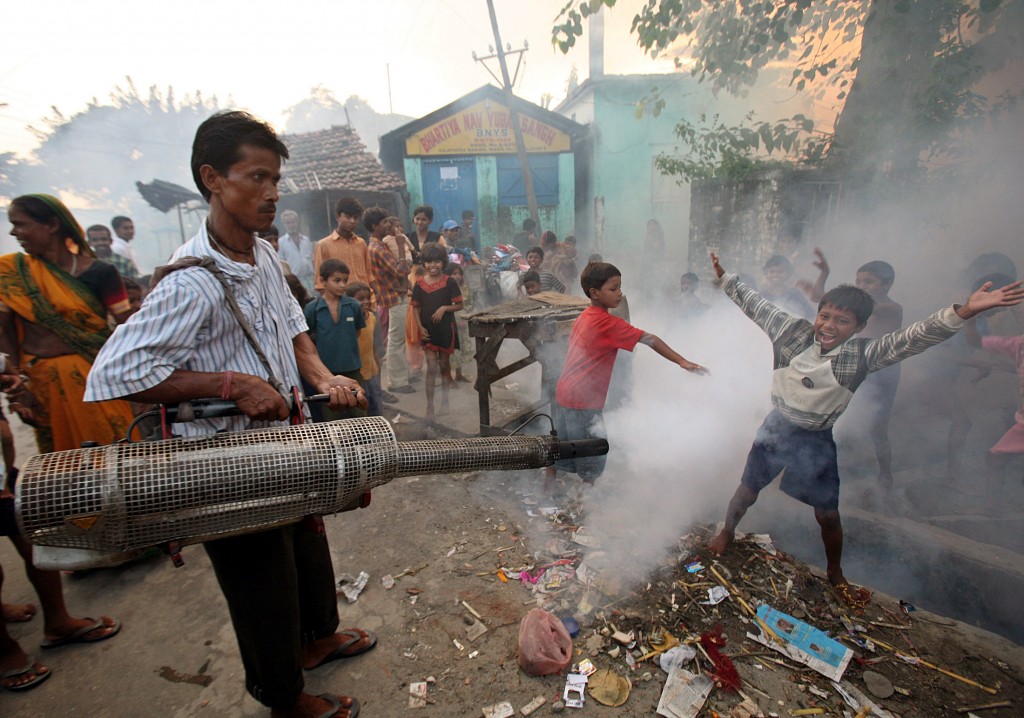 Children play in the fumes of a municipality fumigant sprayer in a slum area in the northeastern Indian city of Siliguri, Oct. 5, 2006. Photo by Rupak De Chowdhuri/Reuters 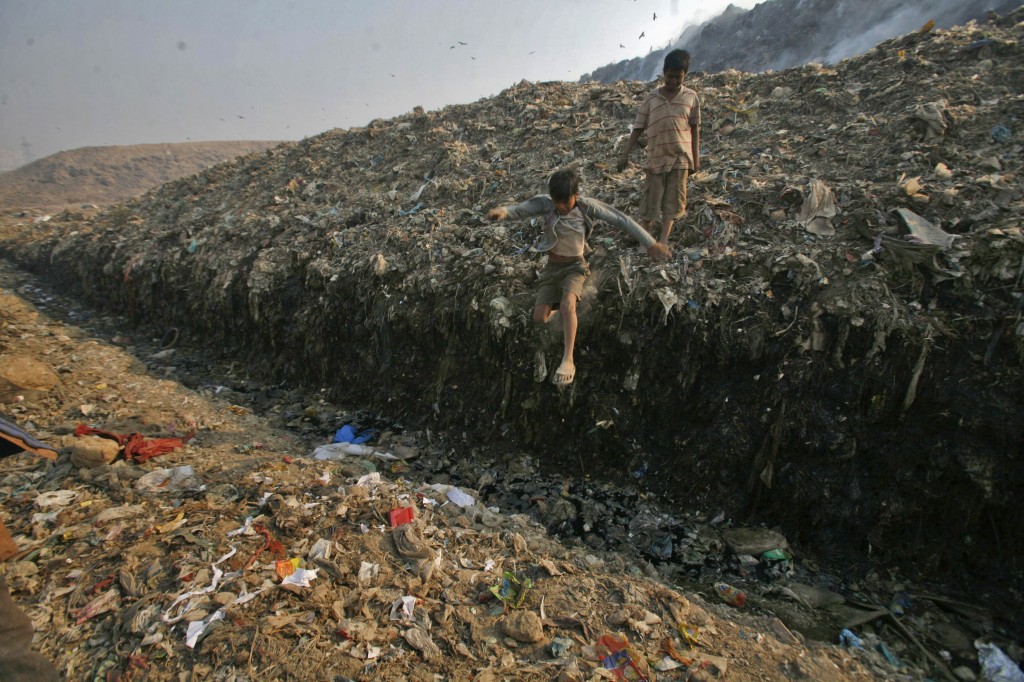 Waste collector Dinesh Mukherjee, 11, watches his friend jump over a puddle of toxic liquid at the Ghazipur landfill in New Delhi Nov. 10, 2011. Photo by Parivartan Sharma/Reuters 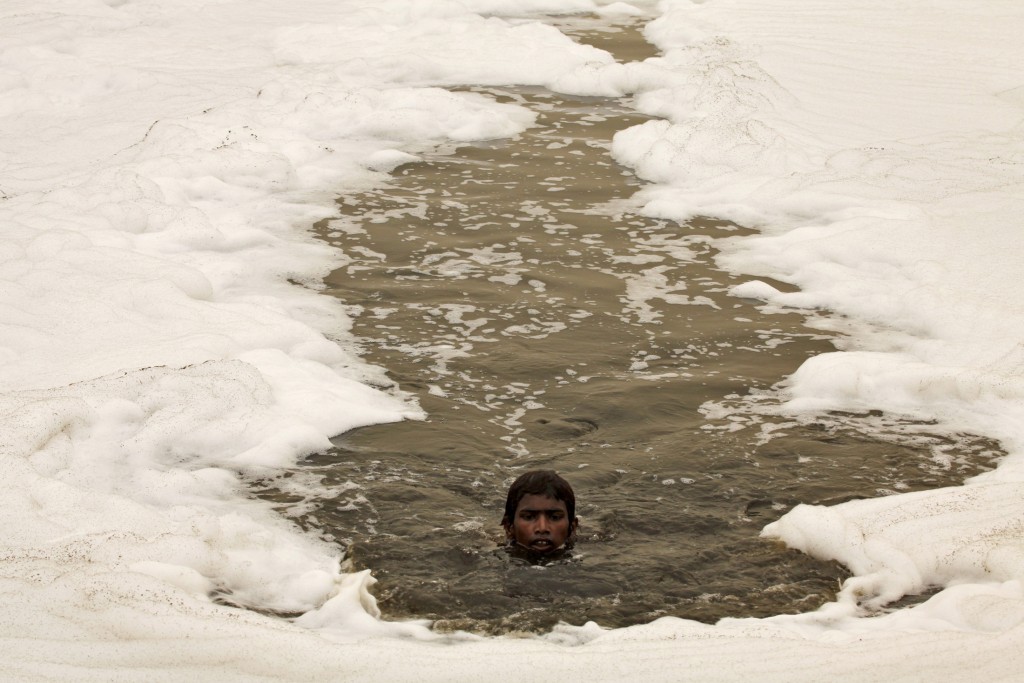 A boy swims in the polluted water of the Yamuna River to dive for offerings thrown in by worshippers amid a dust haze in New Delhi during World Environment Day in 2010. Photo by Reinhard Krause/Reuters 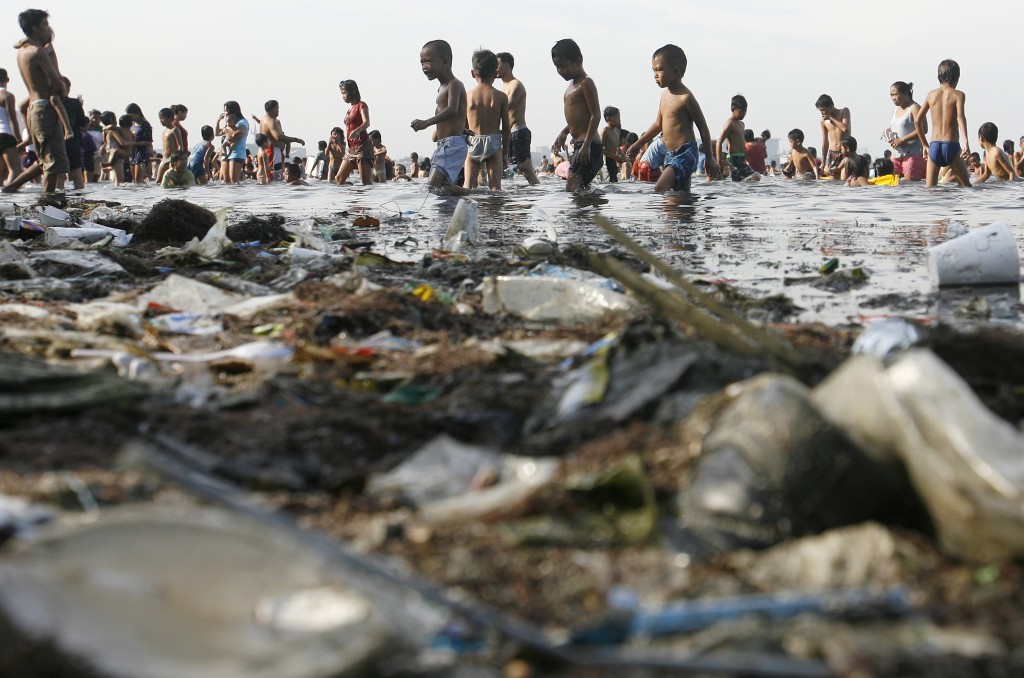 People paddle in the waters of Manila Bay amid garbage in the Philippines’ capital city on Easter Sunday, April 24, 2011. Photo by Cheryl Ravelo/Reuters 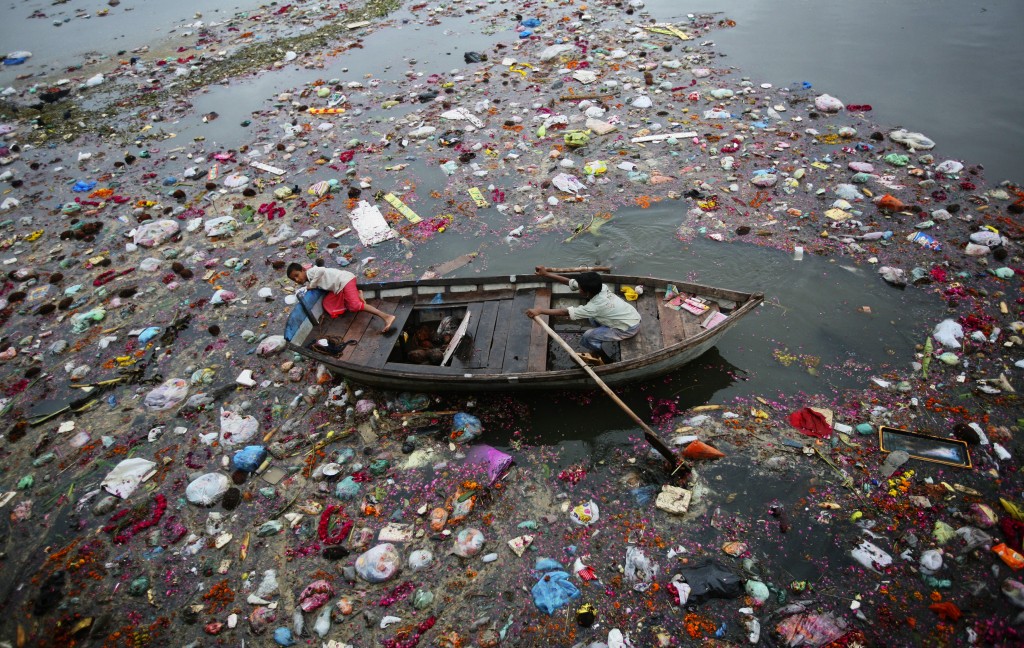 Boys collect coconuts thrown in as offerings by worshippers in the waters of the Sabarmati River after the immersion of idols of the Hindu elephant god Ganesh, the deity of prosperity, in the western Indian city of Ahmedabad in 2011. Photo by Amit Dave/Reuters 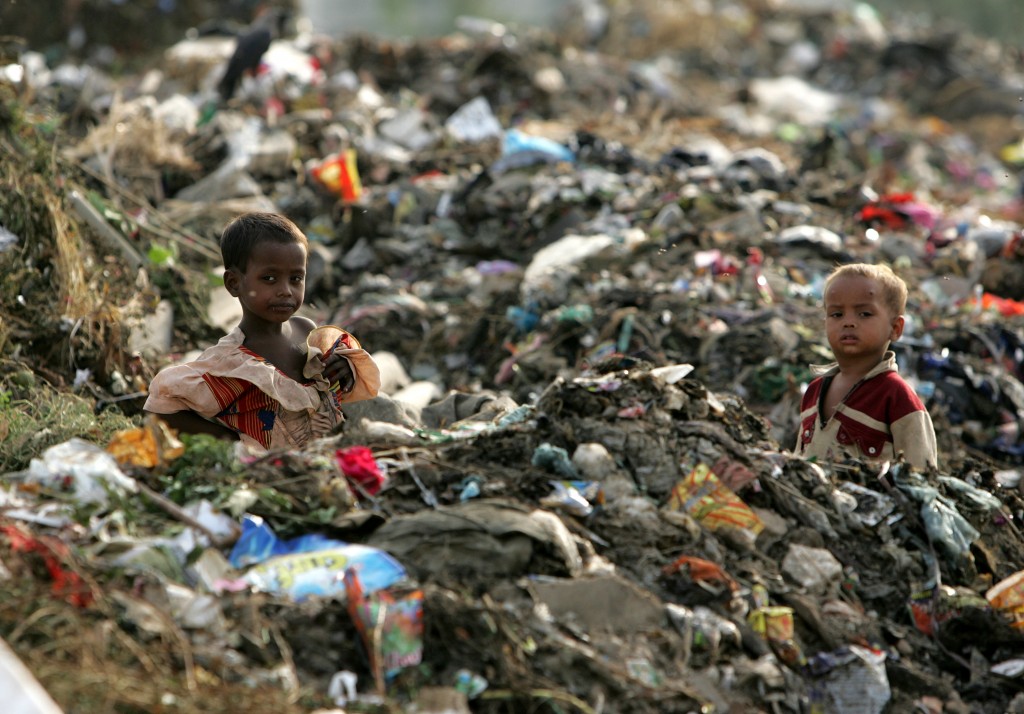 Children of rag-pickers stand amid a heap of garbage on the outskirts of New Delhi in 2006. Photo by Kamal Kishore/Reuters

Left: A girl plays with her brother as they search for usable items at junkyard near the Danyingone station in the suburbs of Yangon, Myanmar, in 2012. Photo by Damir Sagolj/Reuters