JERUSALEM (AP) — As Israel and the Palestinians wrangle over the investigation into the killing of Al Jazeera journalist Shireen Abu Akleh, several independent groups have launched their own probes. One open-source research team said its initial findings lent support to Palestinian witnesses who said she was killed by Israeli fire.

The outcome of these investigations could help shape international opinion over who is responsible for Abu Akleh’s death, particularly if an official Israeli military probe drags on. Israel and the Palestinians are locked in a war of narratives that already has put Israel on the defensive.

Abu Akleh, a Palestinian-American and a 25-year veteran of the satellite channel, was killed last Wednesday while covering an Israeli military raid in the Jenin refugee camp in the occupied West Bank. She was a household name across the Arab world, known for documenting the hardship of Palestinian life under Israeli rule, now in its sixth decade.

Secretary of State Antony Blinken on Sunday said he had spoken to Abu Akleh’s family to express condolences and respect for her work “as well as the need to have an immediate and credible investigation” into her death. 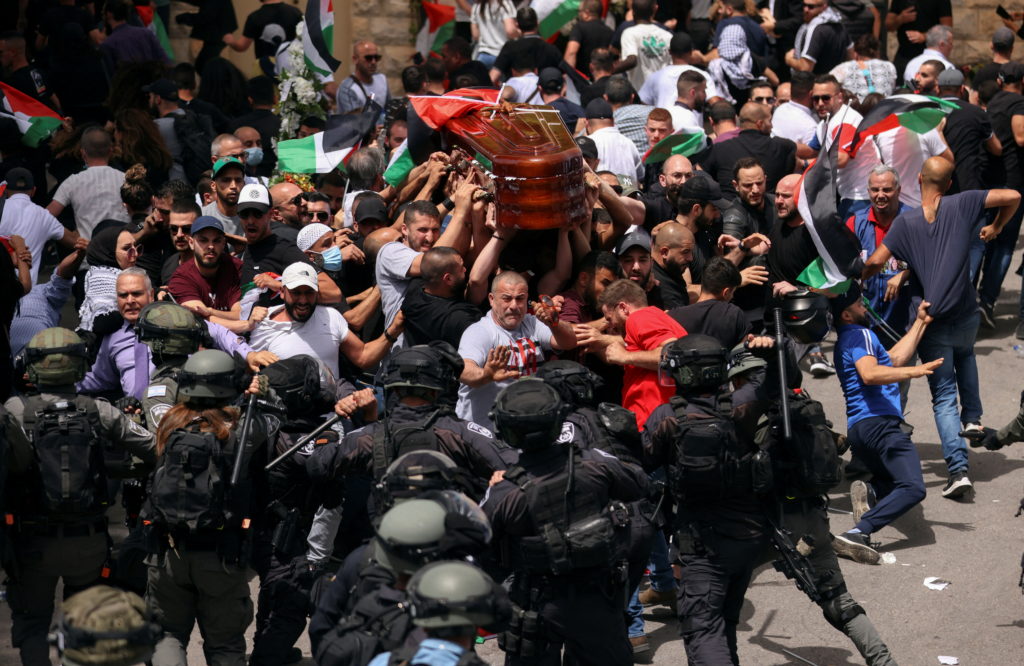 Family and friends carry the coffin of Al Jazeera reporter Shireen Abu Akleh, who was killed during an Israeli raid in Jenin in the occupied West Bank, as clashes erupted with Israeli security forces, during her funeral in Jerusalem, May 13, 2022. REUTERS/Ammar Awad

Palestinian officials and witnesses, including journalists who were with her, say she was killed by army fire. The military, after initially saying Palestinian gunmen might have been responsible, later backtracked and now says she may also have been hit by errant Israeli fire.

Israel has called for a joint investigation with the Palestinians, saying the bullet must be analyzed by ballistics experts to reach firm conclusions. Palestinian officials have refused, saying they don’t trust Israel, and have invited other countries to join the investigation. Human rights groups says Israel has a poor record of investigating wrongdoing by its security forces.

With the two sides at loggerheads over the Abu Akleh probe, several research and human rights groups have launched their own investigations.

Over the weekend, Bellingcat, a Dutch-based international consortium of researchers, published an analysis of video and audio evidence gathered on social media. The material came from both Palestinian and Israeli military sources, and the analysis looked at such factors as time stamps, the locations of the videos, shadows and a forensic audio analysis of gunshots.

The group found that while gunmen and Israeli soldiers were both in the area, the evidence supported witness accounts that Israeli fire killed Abu Akleh.

“Based on what we were able to review, the IDF (Israeli soldiers) were in the closest position and had the clearest line of sight to Abu Akleh,” said Giancarlo Fiorella, the lead researcher of the analysis.

Bellingcat is among a growing number of firms that use “open source” information, such as social media videos, security camera recordings and satellite imagery, to reconstruct events.

Fiorella acknowledged that the analysis cannot be 100% certain without such evidence as the bullet, weapons used by the army and GPS locations of Israeli forces. But he said the emergence of additional evidence typically bolsters preliminary conclusions and almost never overturns them.

“This is what we do when we don’t have access to those things,” he said.

The Israeli human rights group B’Tselem said it too is conducting its own analysis. The group last week played a key role in the military’s backtracking from its initial claims that Palestinian gunmen appeared to be responsible for her death.

The Israeli claim was based on a social media video in which a Palestinian gunman fires into a Jenin alleyway, and then other militants come running to claim they have shot a soldier. The army said that because no soldiers were hurt that day, the gunmen might have been referring to Abu Akleh, who was wearing a protective helmet and flak jacket.

A B’Tselem researcher went to the area and took a video showing that the Palestinian gunmen were some 300 meters (yards) away from where Abu Akleh was shot, separated by a series of walls and alleyways.

Dror Sadot, a spokeswoman for the group, said B’Tselem has begun gathering testimonies from witnesses and may attempt to reconstruct the shooting with videos from the scene. But she said at this point, it has not been able to come to a conclusion about who was behind the shooting.

Sadot said any bullet would need to be matched to the barrel of the gun. The Palestinians have refused to release the bullet, and it is unclear whether the military has confiscated the weapons used that day.

“The bullet on its own can’t say a lot” because it could have been fired by either side, she said. “What can be done is to match a bullet to the barrel,” she said.

The Israeli military did not respond to interview requests to discuss the status of its probe.

Jonathan Conricus, a former Israeli military spokesman and expert on military affairs, said reconstructing a gunfight in densely populated urban terrain is “very complex” and said forensic evidence, such as the bullet, is crucial to reach firm conclusions. He accused the Palestinian Authority of refusing to cooperate for propaganda purposes.

“Without the bullet, any investigation will only be able to reach partial and questionable conclusions,” Conricus said. “One might assume that the strategy of the Palestinian Authority is exactly that: to deny Israel the ability to clear its name, while leveraging global sympathy for the Palestinian cause.”

Meanwhile, Israeli police over the weekend launched an investigation into the conduct of the officers who attacked the mourners at Abu Akleh’s funeral, causing the pallbearers to nearly drop her coffin.

Newspapers on Sunday were filled with criticism of the police and what was portrayed as a public relations debacle.

“The footage from Friday is the very opposite of good judgment and patience,” commentator Oded Shalom wrote in the Yediot Ahronot daily. “It documented a shocking display of unbridled brutality and violence.”

Nir Hasson, who covers Jerusalem affairs for the Haaretz daily, said the problems run much deeper than Israel’s image.

“This was one of the most extreme visual expressions of the occupation and the humiliation the Palestinian people experience,” he wrote.

Left: A journalist holds a placard with a picture of Al Jazeera reporter Shireen Abu Akleh, who was killed during an Israeli raid in the occupied West Bank area of Jenin, during a protest in Mogadishu, Somalia May 13, 2022. Photo by Feisal Omar/Reuters.