Indonesia voters to decide between strongman and ‘people’s president’

JAKARTA, Indonesia — In the final moves of Indonesia’s presidential campaign, one candidate dashed to Saudi Arabia to meet its king and perform a minor pilgrimage. The other attended a feline photography exhibition and giggled with delight at a giant photo of his own pet cat.

For the world’s most populous Muslim-majority nation, the message intended by President Joko “Jokowi” Widodo’s trip to the birthplace of Islam was obvious after a campaign in which conservative opponents tried to discredit him as insufficiently Islamic.

What his challenger for a second time, former special forces general Prabowo Subianto, meant was less apparent. But it presented a softer version of a candidate prone to explosions of anger who has flown around Indonesia in a private jet even as he said he was campaigning for the poor.

About 193 million Indonesians are eligible to vote in presidential and legislative elections Wednesday that will decide who leads a nation that’s an outpost of democracy in a neighborhood of authoritarian governments and is forecast to be among the world’s biggest economies by 2030.

Their choice is between five more years of the steady progress achieved under Indonesia’s first president from outside the Jakarta elite or electing a volatile figure with a checkered human rights record from the era of the Suharto military dictatorship that ended two decades ago. 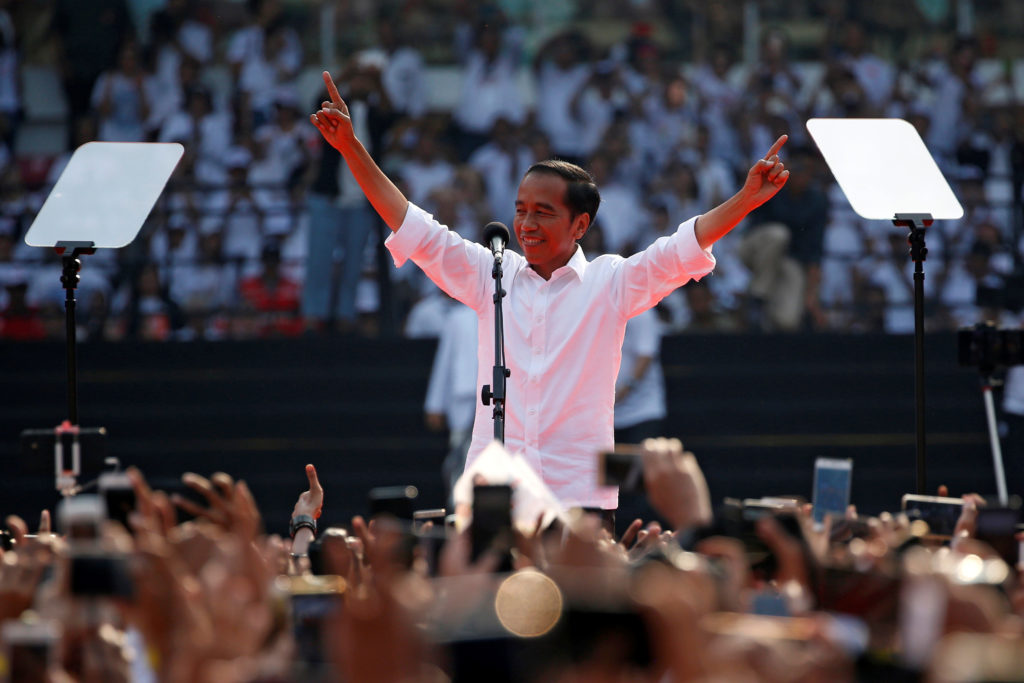 Indonesia’s incumbent presidential candidate Joko Widodo gestures as he greets his supporters during a campaign rally at Gelora Bung Karno stadium in Jakarta, Indonesia, on April 13, 2019. Photo by Willy Kurniawan/Reuters

The 2014 election of Widodo, a furniture exporter whose political career started as a small city mayor, was a “manifestation of the new Indonesia, of the land of opportunity in which democratic opening has made it possible for anyone to come up to the top,” said Dewi Fortuna Anwar, a politics expert at the Indonesian Institute of Sciences.

“If Jokowi wins again, clearly that is a continued reaffirmation of that as well as an endorsement of his track record for the past five years,” she said.

Surveys show Widodo with a lead of up to 20 percentage points over Subianto. But the pollsters and commentators are nervous, afraid they might be failing to capture facts on the ground in the same way opinion surveys misjudged the 2016 U.S. presidential election and U.K. referendum on European Union membership.

The enthusiasm that Widodo generated in the 2014 campaign was far less evident this year apart from a final major rally at a Jakarta stadium which attracted well over 100,000 fervent supporters — about the same as Subianto a week earlier at the same venue.

“He is the best leader that the Indonesian people have ever had, very simple, not arrogant and we know what he has done for our country,” said Dwi Mustikarini, one of the tens of thousands who packed the stadium for Widodo’s rally.

Akhirudin Konsi said at a rally Saturday for Subianto’s running mate that he wants a “president who will fight for our rights and stand behind people, who will lower prices, especially education, fuel and basic needs.”

Election day results that are tighter than Widodo’s narrow 2014 victory over Subianto are quite possible because “the polls haven’t been able to capture the grassroots dynamics,” said Alexander Arifanto, a researcher at the S. Rajaratnam School of International Studies in Singapore.

“Subianto’s campaign has had more zeal and spirit than Jokowi’s side,” he said. 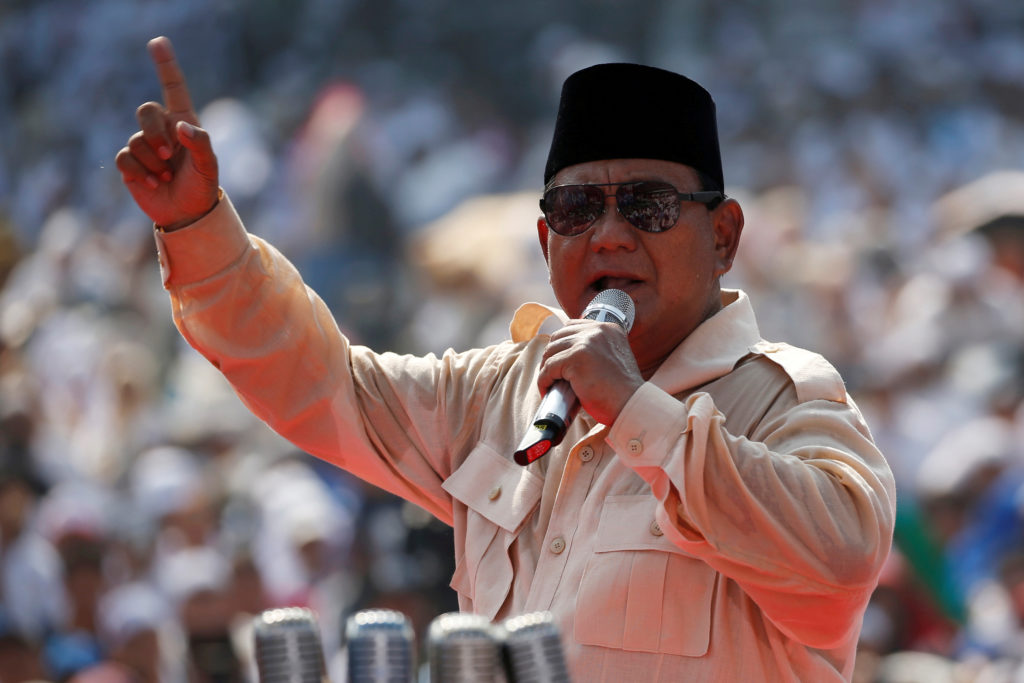 Hard-line Islamic groups that were behind massive 2016 street protests against Jakarta’s Widodo-allied governor have campaigned effectively for Subianto for months, Arifanto said. And there is anecdotal evidence, he said, that some Subianto supporters are not declaring their true voting intentions in surveys.

Widodo has tried to neutralize the not-a-real-Muslim whispers with the selection of Ma’ruf Amin, the leading Islamic cleric in Indonesia, as his running mate, though he also risked alienating progressive and moderate supporters.

His weekend dash to Saudi Arabia appeared to be one last push to shore up the pious Muslim vote. Widodo and his office tweeted photos of him meeting with King Salman, a popular figure in Indonesia, and, dressed in white robes, performing the minor pilgrimage in Mecca.

Subianto’s campaign released photos of him at an exhibition of cat photos by a Dutch photographer that featured the politician’s own cat, “Bobby,” which has a following on Instagram.

“Wow is this the photo of Bobby? It’s very nice,” Subianto said Sunday, while giggling and pointing at the photo, a statement said.

A strident nationalist, Subianto has run a fear-based campaign, highlighting what he sees as Indonesia’s weakness and the risk of exploitation by foreign powers or disintegration.

His ultra-nationalist tactics preceded President Donald Trump’s polarizing rhetoric by several years and the party he founded in 2008, Gerinda, is officially known as the Greater Indonesia Movement. He has long been dogged by his dismissal from the military in 1998 after soldiers under his command kidnapped student activists, 13 of whom were never seen again.

Anwar, the politics expert, said the former general’s campaign is a re-run of 2014, “where he was basically stoking the emotion, the fear that Indonesia was being taken over by foreign interests, the country is basically a basket case, that things are going to get worse unless a firm handler is at the helm.”

Economic growth has been stable if unspectacular and inflation is low, maximizing the impact of poverty alleviation programs.

The U.N.’s Food and Agriculture Organization and other international agencies said earlier this month that the percentage of Indonesian children suffering from stunting — malnutrition that can result in lifelong physical and cognitive impairment — fell to 30.8% from nearly 38% between 2013 and 2018.

To have a chance of winning, Subianto needs to win most of the undecided voters and also claw back the gains Widodo has made in Subianto’s stronghold provinces such as West Java, Banten and parts of Sumatra, he said.

“When we ask people in our surveys why do you vote for this candidate, the first reason is about the performance, the polices, the programs,” he said. “Incumbency is important.”