This is how Internet speed and price in the U.S. compares to the rest of the world

Even though the Internet was invented in the United States, Americans pay the most in the world for broadband access. And it’s not exactly blazing fast.

For an Internet connection of 25 megabits per second, New Yorkers pay about $55 — nearly double that of what residents in London, Seoul, and Bucharest, Romania, pay. And residents in cities such as Hong Kong, Seoul, Tokyo and Paris get connections nearly eight times faster.

Here’s how cities across the world compare when it comes to Internet price and speed: 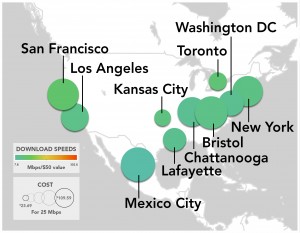 Internet speeds and prices in cities in North America. 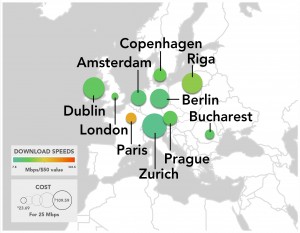 Internet speeds and prices in cities in Europe. 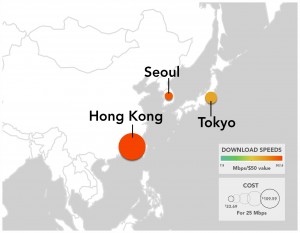 Internet speeds and prices in cities in Asia.

So why are Americans paying more for slower service? The answer: There’s limited competition in the broadband market.

In fact, half of American homes have only two options for Internet service providers for basic broadband, according to the Federal Communications Commission. And for faster speeds, a majority of households have only one choice.

The municipal broadband services in these cities often provide faster speeds using fiber instead of traditional telephone or cable lines, though not necessarily for cheaper. Other cities have even partnered with Google to roll out high-speed internet.

Watch NewsHour Weekend Sunday to learn more about how New York City is working to get internet access to the more than 730,000 homes without broadband access. Or watch our full report in the player below: