TEHRAN, Iran — Iran’s supreme leader chastised President Donald Trump on Wednesday over his decision to pull America out of the 2015 nuclear deal, while lawmakers lit a paper U.S. flag on fire inside parliament, shouting, “Death to America!”

While Iranian officials, including the parliament speaker, say they hope Europe will work with them to preserve the deal, many are pessimistic.

The government backlash reflected broad public anger in Iran over Trump’s decision, which threatens to destroy the landmark agreement. While Iranian officials, including the parliament speaker, say they hope Europe will work with them to preserve the deal, many are pessimistic.

In comments before school teachers, Khamenei told Trump: “You cannot do a damn thing!” The exhortation from Khamenei, who has final say on all state matters, follows a pattern of Iranian leaders declaring their nation’s ability to resist foreign pressure or interference.

Khamenei described Trump’s speech as having “over 10 lies,” without elaborating on them. He also said Trump’s remarks threatened both Iran’s people and its theocratic government.

WATCH: Trump says U.S. will leave Iran deal, ‘will not be held hostage to nuclear blackmail’

Earlier Wednesday, the lawmakers, including a Shiite cleric, held the flaming flag alight as their colleagues joined their chants. They also burned a piece of paper representing the nuclear deal and stomped on the papers’ ashes.

While U.S. flag-burning is common in Iran and harsh criticism of America has been a staple of Iranian parliamentary politics for years, it was the first time political observers could remember anything being burned inside the parliament itself.

The 2015 agreement imposed restrictions on Iran’s nuclear program in return for the lifting of most U.S. and international sanctions.

However, the deal came with time limits and did not address Iran’s ballistic missile program or its regional policies in Syria and elsewhere. Trump has repeatedly pointed to those omissions in referring to the accord as the “worst deal ever.” Proponents of the deal have said those time limits were meant to encourage more discussion with Iran in the future that could eventually address other concerns. 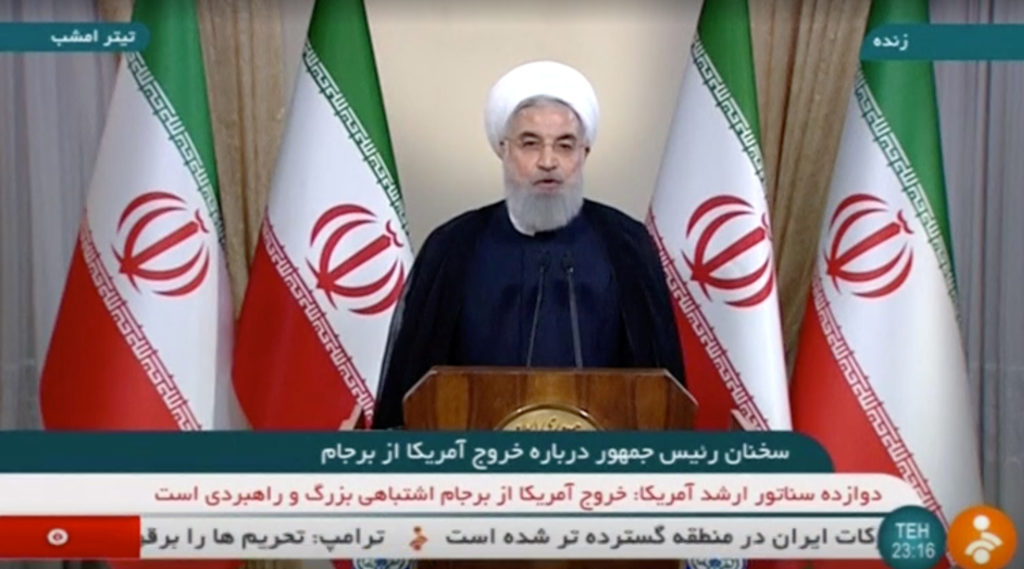 Iran’s President Hassan Rouhani speaks about the nuclear deal in Tehran, Iran, on May 8, 2018 in this still image taken from video. Photo by IRINN/Reuters TV

Iran hopes the European Union will pass laws to protect European firms from any potential U.S. sanctions. EU officials have suggested they’ll do what they can to salvage the agreement.

Still, Rouhani made a point of stressing that Iran, at any time, could resume its nuclear program.

“So if necessary, we can begin our industrial enrichment without any limitations,” the Iranian leader said. “Until implementation of this decision, we will wait for some weeks and will talk with our friends and allies and other signatories of the nuclear deal, who signed it and who will remain loyal to it. Everything depends on our national interests.”

Wednesday morning after the flag burning, parliament speaker Ali Larijani said responsibility for saving the deal fell on the EU and other world powers still in the accord.

“The period is only a window in which the EU can prove if it has enough weight for settling down international issues or not?” he said.

Larijani also urged the country’s nuclear department to prepare for “resumption of all aspects of nuclear activities.”

Many Iranians are worried about what Trump’s decision could mean for their country.

The Iranian rial is already trading on the black market at 66,000 to the dollar, despite a government-set rate of 42,000 rials. Many say they have not seen any benefits from the nuclear deal.

Left: Iranian President Hassan Rouhani speaks during a meeting with Muslim leaders and scholars in Hyderabad, India, on Feb. 15, 2018. Photo by Danish Siddiqui/Reuters