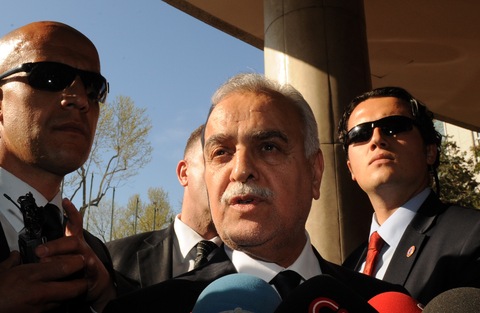 Iraqi Vice President Tariq al-Hashemi speaks to reporters after a meeting with the leader of Iraq’s autonomous Kurdistan in Istanbul, Turkey, on April 19. Photo by Bulent Kilic/AFP/Getty Images.

The fugitive Iraqi vice president sentenced to death Sunday on charges of murder is refusing to take the usual avenue open to him, to return to Iraq to appeal the verdict in person. The reason is simple, his advisers say. He fears for his life.

“There’s no doubt about it,” Mark Alsalih, an adviser to Vice President Tariq al-Hashemi, said to me today by phone from Dubai. “There’s not a shred of doubt that he’d be in physical danger.” Even with the world looking on? “That won’t matter. A bomb will go off, and they’ll say, ‘Oh, it’s one of the many bombings we have here in Iraq.’ “

Whether Hashemi is right about the danger — or whether he won’t return because he’s guilty — it’s not a good sign about the state of affairs in Iraq when a top Sunni political figure lacks confidence in one of the most basic assurances of a democratic society.

It’s impossible to untangle the rights and wrongs of the case. Hashemi fled to Turkey last December when the Shiite-led government of Prime Minister Nouri al-Maliki — on the day after the last U.S. forces left — issued terror charges against him, accusing him of masterminding death squads against his rivals.

Wherever the truth lies, there’s clearly deep distrust between the majority Shiites and minority Sunnis in Iraq, and more widely in the region. “Maliki controls the Ministry of Defense, Interior and Intelligence, and is using them to establish himself as a dictator,” Alsalih said. “He’s following in the footsteps of Saddam Hussein, only this time backed by Iran.”

When I asked a senior Turkish diplomat about that charge, he said, “It’s obvious. Everyone sees it. He controls every lever of power. This is no democracy that the U.S. left behind.”

James Jeffrey, just departed as U.S. ambassador to Iraq, disputes that. “This is a coalition government,” he said. “It has Sunni Arab participation. And by and large, people in Iraq are living together peacefully. But he warns, “This can be endangered if people are not careful.”

Along with the political standoff has come a slight uptick in violence, mostly by Sunni insurgents against Shias. According to U.N. statistics, more Iraqis died from attacks in the first six months of 2012 than in the same period in 2011. It’s nowhere near the level of the bloody years of 2006 and 2007, but the trend is not moving in the right direction.

The deeper risk is not just instability in Iraq, but a wider sectarian conflagration in the region. Iraq’s Sunni neighbors see spreading pattern of Sunni-Shia conflict simmering in Iraq, flowering in Syria, and threatening Lebanon and even Turkey with instability. They see the flames being fanned by Shiite-led Iran, which is now shipping military supplies through Iraqi airspace to Syria. They’re equally troubled by the growing presence in Syria of al-Qaida fighters from Iraq.

“Extremists, including foreigners, are playing a bigger role with the Syrian rebels, and heavier weapons are moving into the region,” the Turkish diplomat said. “The fire is burning.”

In an op-ed in the Washington Post last weekend, Jeffrey warned of a Balkans-like scenario that “might violently split Syria, and then Iraq and finally the region along sectarian lines.”

Many of the regional players want the United States to do more, to lean on Maliki to share power to buy himself more political stability. But with American troops gone and Iraq pumping oil, Washington’s leverage is limited. And the administration’s Iraq jawboner-in chief, Vice President Joe Biden, is consumed by the election campaign. For now Iraq — like the rest of the region — will have to hold together on its own.