Ireland became the first country in the world to legalize gay marriage by popular vote on Saturday in a landmark victory for the gay-rights movement.

“With today’s vote we have disclosed who we are: a generous, compassionate, bold and joyful people,” Prime Minister Enda Kenny said before a crowd Saturday evening.

Bursts of jubilation from thousands of Irish citizens rang out at the official results center in Dublin Castle, as advocates and revelers celebrated the nation’s watershed moment, according to news reports.

“We’re the first country in the world to enshrine marriage equality in our constitution and do so by popular mandate,” Leo Varadkar, an Irish Cabinet minister who came out as gay at the start of a government-led effort to amend Ireland’s conservative Catholic constitution, told the Associated Press.

“That makes us a beacon, a light to the rest of the world, of liberty and equality, so it’s a very proud day to be Irish,” he said. 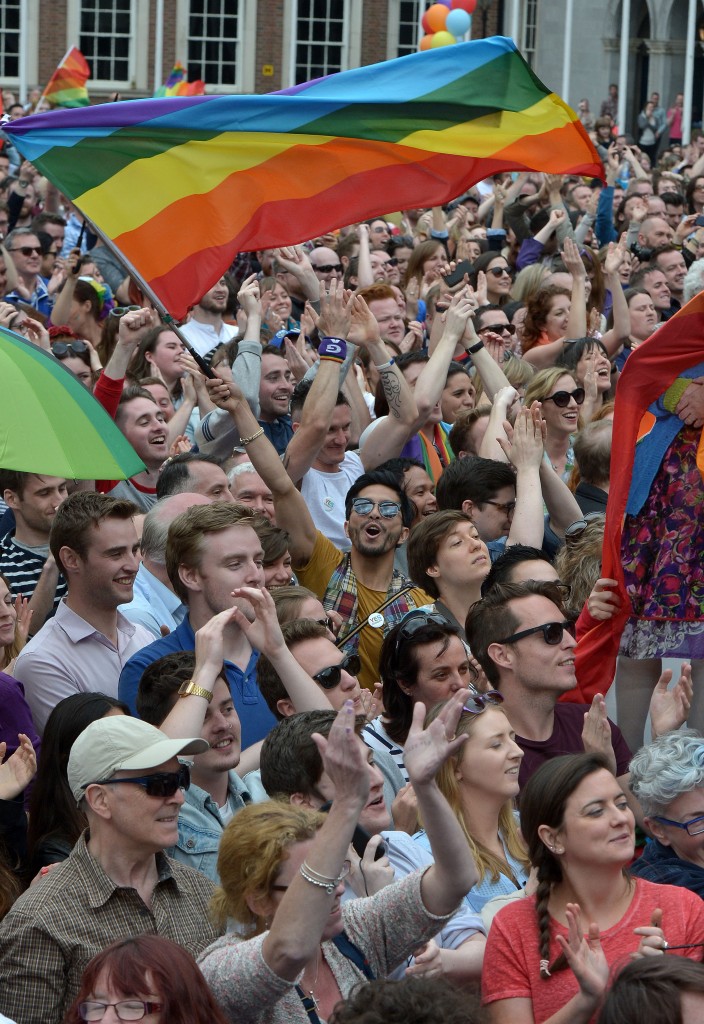 Thousands of people celebrate in Dublin Castle Square as the result of the referendum is relayed on May 23, 2015 in Dublin, Ireland. Photo by Charles McQuillan/Getty Images.

While 19 other countries have legalized same-sex marriage, Ireland is the first to approve it in a national popular vote. Analysts credited the nation’s strong approval to campaigners’ use of social media that mobilized young voters to back equal marriage rights, the AP reported.

“The amount of people who came out to vote is just such an emotional thing for us,” Fred Schelbaum, 48, told Reuters. “Up to now a lot of gay people felt they were tolerated in Ireland,” he said standing with his civil partner Feargal Scott, 43, who he said he plans to marry.

“Now we know that it’s much more than that,” he said.

While homosexuality in Ireland was only decriminalized in 1993 and many still oppose same-sex marriage, the passing referendum added the language, “Marriage may be contracted in accordance with law by two persons without distinction as to their sex,” to the country’s constitution.

That a referendum would take place at all was announced by government officials in November 2013. This February, it was announced the vote would happen on May 22.

“A lot of my family have voted no in this campaign so at a personal level it has been very traumatic,” Jean Webster, 54, told Reuters. “I needed to wake up this morning to have thousands of people affirm my rights when certain people in my family weren’t.”

“We woke up today to a new Ireland. The real Irish Republic that I have dreamed of my whole life,” she said.

Left: Supporters in favor of same-sex marriage pose for a photograph as thousands gather in Dublin Castle square awaiting the referendum vote outcome on May 23, 2015 in Dublin, Ireland. Photo by Charles McQuillan/Getty Images.