Israel blamed for missile strike on Syrian air base

BEIRUT — Russia and the Syrian military blamed Israel for a pre-dawn missile attack Monday on a major air base in central Syria that reportedly killed 14 people, including Iranians, while international condemnation grew over a suspected poison gas attack over the weekend that was blamed on the Syrian government.

Russia’s Defense Ministry said two Israeli aircraft targeted the T4 air base in Homs province, firing eight missiles. It said Syria shot down five of them while the other three landed in the western part of the base. Syrian state TV quoted an unnamed military official as saying that Israeli F-15 warplanes fired several missiles at T4. It gave no further details.

Israel’s foreign ministry had no comment when asked about reports of the airstrikes, which did not appear to be related to Saturday night’s alleged chemical weapons attack. 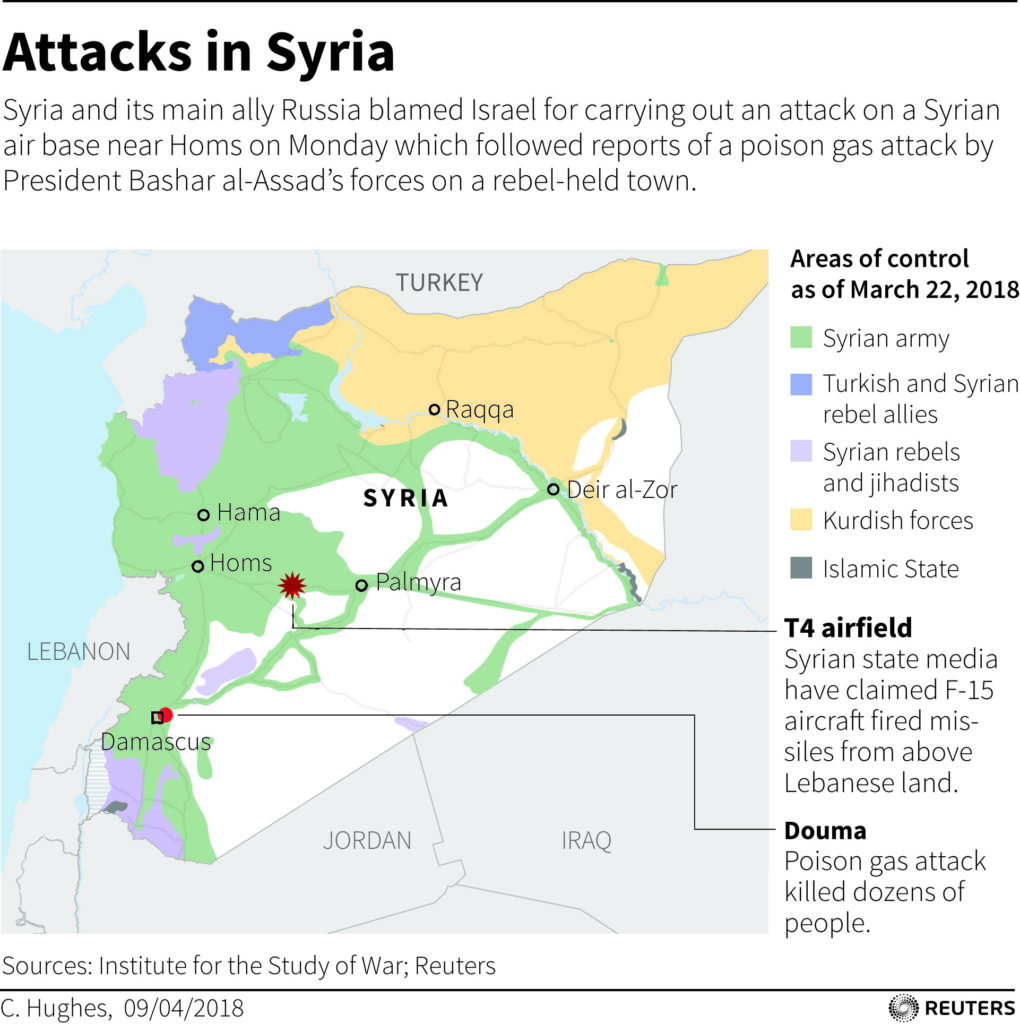 Since 2012, Israel has struck inside Syria more than 100 times, mostly targeting suspected weapons’ convoys destined for the Lebanese militant group Hezbollah, which has been fighting alongside Syrian government forces.

Most recently, Israel hit the same T4 base in February, after it said an Iranian drone that had violated Israeli airspace took off from the base. The base, which was used as a launching pad for counter offensive attacks against Islamic State militants who were at one point stationed close by, is near the Shayrat air base, which was targeted by U.S. missiles last year in response to a chemical weapons attack.

Monday’s missile attack came hours after President Donald Trump warned there would be a “big price to pay” after Saturday’s suspected poison gas attack on the last remaining foothold for Syrian rebels in the eastern suburbs of Damascus. At least 40 people were killed in that assault, including families found in their homes and shelters, opposition activists and local rescuers said.

Syria’s state news agency SANA initially said the attack on the T4 air base was likely “an American aggression,” but Pentagon spokesman Christopher Sherwood quickly denied the United States was behind the strike and the agency then dropped the accusation, blaming Israel instead.

SANA said the missile attack resulted in a number of casualties but provided no specific figures.

The Britain-based Syrian Observatory for Human Rights, which monitors the war through a network of activists on the ground, said 14 died, including Iranians and also three Syrian officers.

Rami Abdurrahman, the Observatory’s chief, said the assault targeted a mobile air defense unit and some buildings inside the air base. He added that it also hit posts outside the base used by the Iranians and Iran-backed fighters.

Dmitry Peskov, spokesman for President Vladimir Putin, told reporters on Monday that that Israel had not spoken to the president ahead of the airstrike even though there may have been Russian military advisers at the base, which he described as “a cause for concern for us.”

The U.S. launched several dozen Tomahawk cruise missiles at a Syrian air base last year, after a chemical attack in the northern Syrian town of Khan Sheikhoun killed dozens of people. 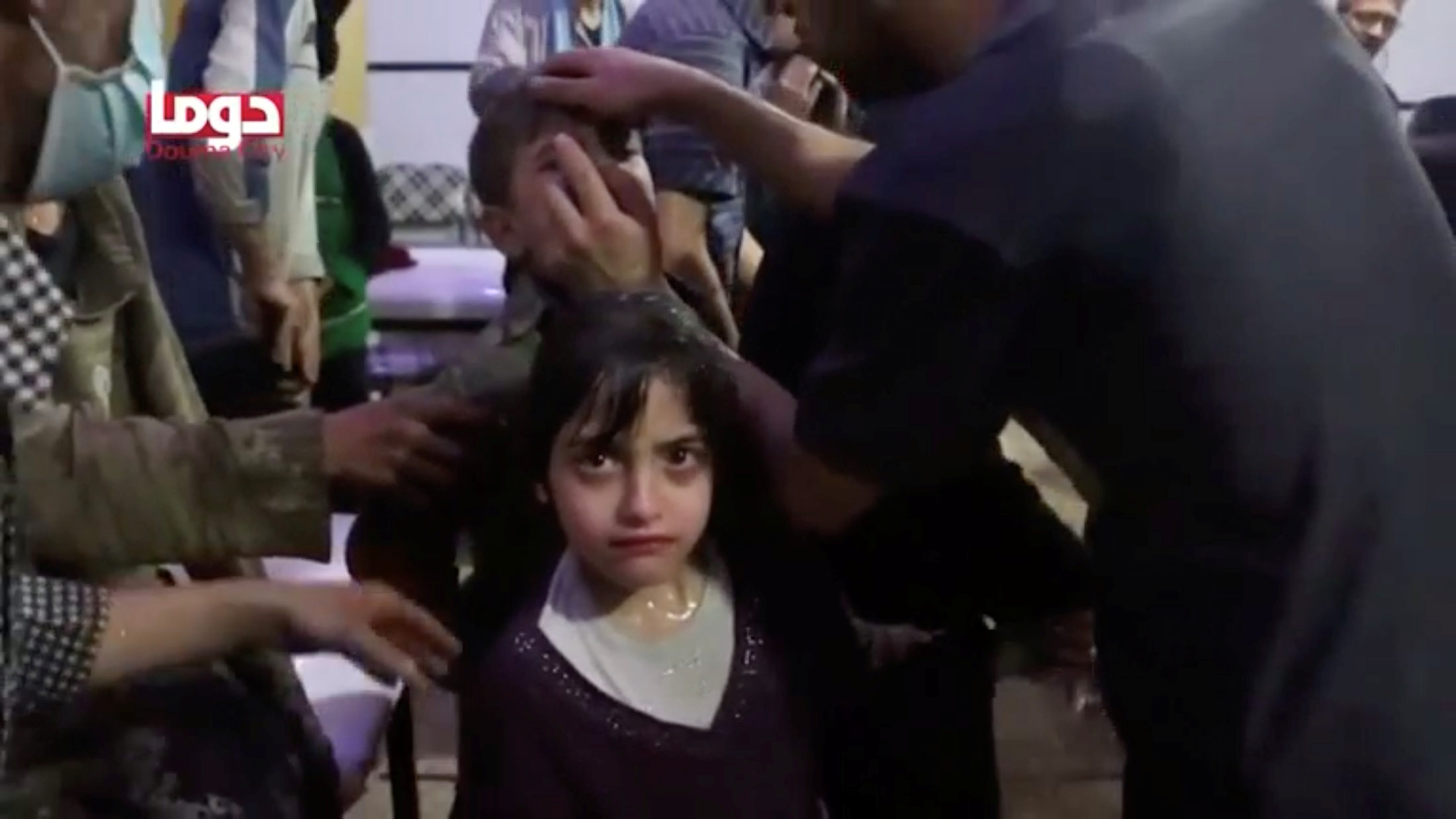 A girl looks on following alleged chemical weapons attack, in what is said to be Douma, Syria, in this still image from video obtained by Reuters on April 8, 2018. Photo by White Helmets/Reuters TV via Reuters

In response to the reports, Trump on Sunday blamed Syrian government forces for what he called a “mindless CHEMICAL attack.” In a series of tweets, Trump held Russia and Iran, Syrian President Bashar Assad’s chief sponsors, responsible.

Trump was to meet with his senior military leadership on Monday, the same day his new national security adviser, John Bolton, assumes his post. Bolton has previously advocated significant airstrikes against Syria. The European Union also laid the blame squarely on Assad’s government.

The Syrian government denied the chemical weapons allegations, calling them fabrications. The Russian military said its officers visited the hospital in Douma and talked to the staff, and said they did not confirm reports of the assault.

The organization, also known as the White Helmets, and the Syrian American Medical Society, a medical relief organization, did not identify the substance used but said survivors treated at clinics smelled strongly of chlorine.

Those reports could not be independently verified because of a government blockade around the town. 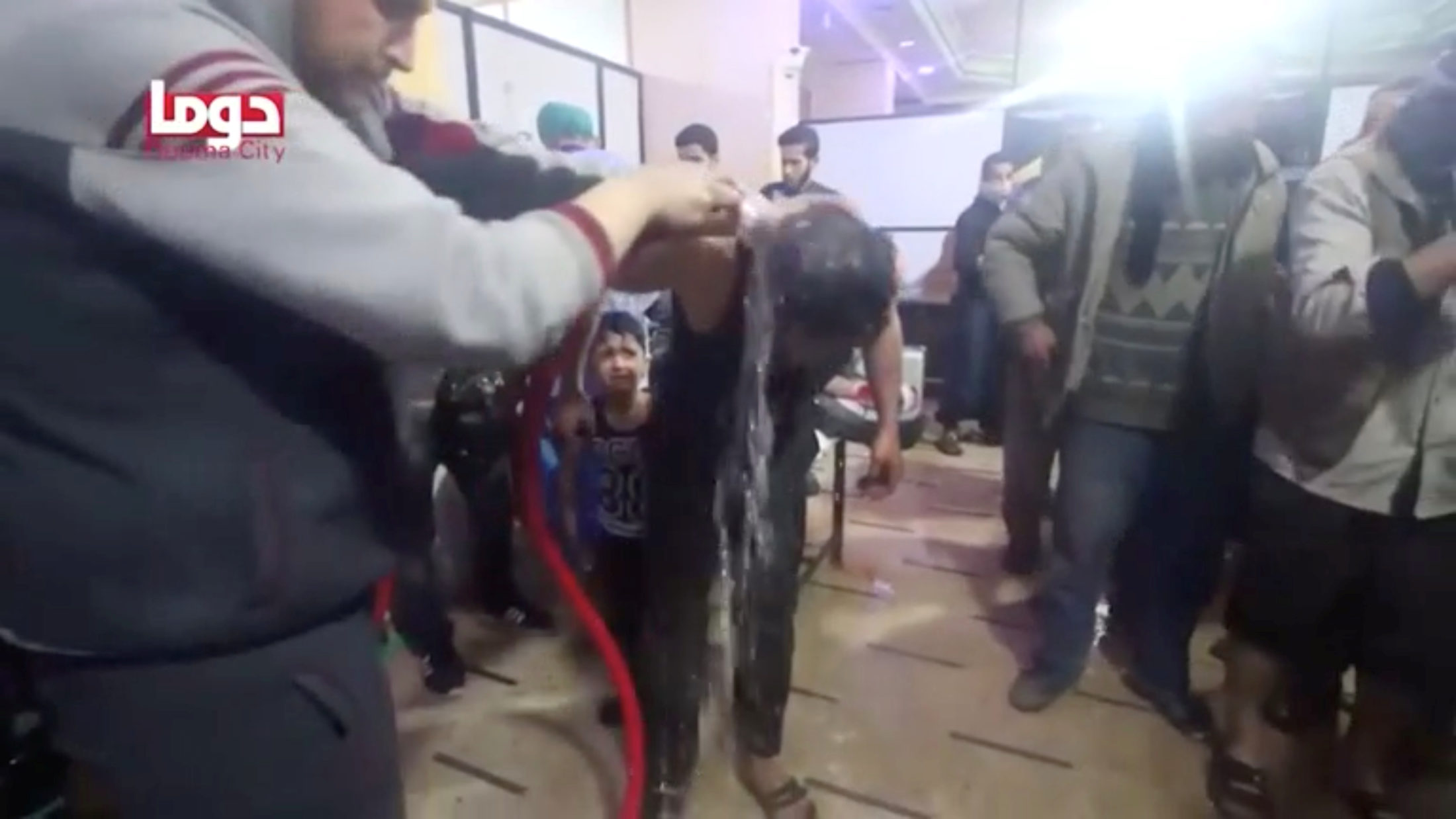 A man is washed following an alleged chemical weapons attack in Douma, Syria in this still image from video obtained by Reuters on April 8. Photo by White Helmets/Reuters TV

Hours after the attack, the Army of Islam rebel group agreed to surrender the town and evacuate their fighters to rebel-held northern Syria, Syrian state media reported. The group also agreed to give up its prisoners, a key government demand.

More than 100 buses entered the town on Sunday night to take the fighters and their families to Jarablus, a town under the shared control of rebels and Turkey, said Syrian state-affiliated al-Ikhbariya TV.

Syrian state media said dozens of civilians who had been held for years by the rebels were set free. The SANA news agency said the people were freed around midnight on Sunday, adding that they had been held by the Army of Islam group since 2013.

The evacuations follow a pattern of departures around the capital, Damascus, and other major Syrian cities as the government reasserts its control after seven years of war.

In his tweets Sunday, Trump called Assad an “animal” and delivered a rare personal criticism of Putin for supporting him. Trump has declared his intent to withdraw U.S. troops from Syria in the coming months, despite resistance from many of his advisers.

Syrian rescuers from the White Helmets documented 42 fatalities in Saturday’s reported chemical attack but were impeded from searching further by strong odors that caused breathing difficulties, said Siraj Mahmoud, a spokesman for the group.

More than 500 people, mostly women and children, were brought to medical centers complaining of difficulties breathing, foaming at the mouth and burning sensations in the eyes. Some had bluish skin, a sign of oxygen deprivation, according to a statement, symptoms consistent with chemical exposure.

The Observatory gave a higher death toll, saying at least 80 people were killed in Douma, including around 40 who died from suffocation. But it said the suffocations were the result of shelters collapsing on people inside them.

In denying the chemical weapons allegations, a government statement said “the army, which is advancing rapidly and with determination, does not need to use any kind of chemical agents.”

Russia denied any involvement in the attack. Maj. Gen. Yuri Yevtushenko was quoted by Russian news agencies Sunday as saying Russia was prepared to send specialists to Douma to “confirm the fabricated nature” of the reports.

In recent weeks, government forces have recaptured villages and towns in the eastern Ghouta suburbs of the capital. Douma was the only town left holding out.

A 2013 chemical attack in eastern Ghouta that killed hundreds of people was widely blamed on government forces. The U.S. threatened military action but later backed down.

Syria denies ever using chemical weapons during the war and says it eliminated its chemical arsenal under a 2013 agreement brokered by the U.S. and Russia.

Left: Buses carry rebels and their families who left Douma, at the Wafideen camp in Damascus, Syria, on April 9, 2018. Photo by Omar Sanadiki/Reuters