JERUSALEM — Israel’s defense minister on Sunday rejected international calls for an investigation into deadly violence along Gaza’s border with Israel, saying troops acted appropriately and fired only at Palestinian protesters who posed a threat.

Fifteen Palestinians were killed and over 700 wounded in Friday’s violence near the Israeli border, according to Palestinian health officials. It was the area’s deadliest violence since a war four years ago.

Human rights groups have accused the army of using excessive force, and both the U.N. secretary-general and the European Union’s foreign policy chief have urged an investigation.

In an interview, Defense Minister Avigdor Lieberman said Israel would not cooperate with a U.N. inquiry if there were one.

“From the standpoint of the Israeli soldiers, they did what had to be done,” Lieberman told Israeli Army Radio. “I think that all of our troops deserve a commendation, and there won’t be any inquiry.”

Friday’s mass marches were largely led by Gaza’s ruling Hamas group and touted as the launch of a six-week-long protest campaign against a stifling decade-old blockade of the territory. Israel and Egypt have maintained the blockade since Hamas, an Islamic militant group sworn to Israel’s destruction, seized control of Gaza in 2007. 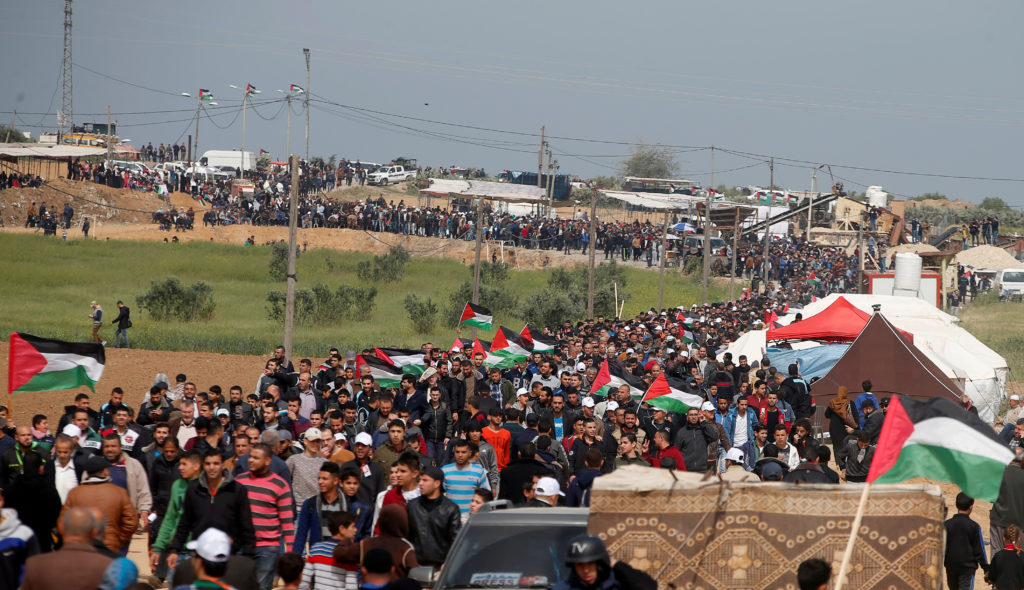 Palestinians attend a tent city protest along the Israel border with Gaza, demanding the right to return to their homeland, east of Gaza City March 30, 2018. Photo by Mohammed Salem/Reuters

Israeli troops responded with live fire and rubber-coated steel pellets, while drones dropped tear gas from above. Soldiers with rifles were perched on high earthen embankments overlooking the scene.

Protests have continued since Friday but at a far smaller scale. On Sunday, one person was seriously wounded by gunfire, Palestinian medical officials said. 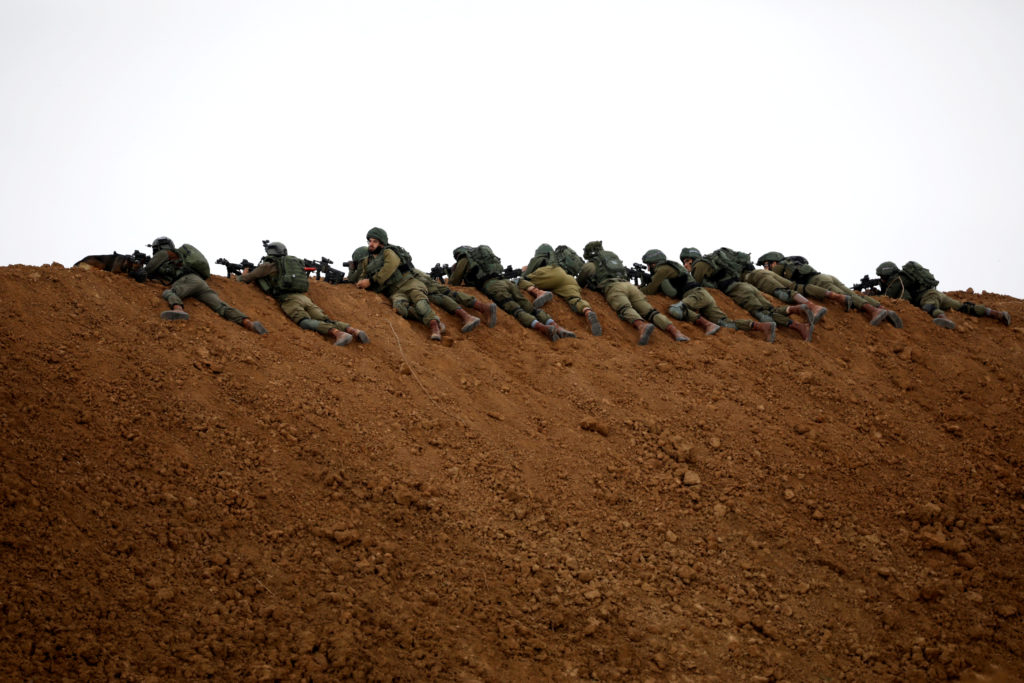 Israeli soldiers are seen next to the border fence on the Israeli side of the border with the northern Gaza Strip, Israel, March 30, 2018. Photo by Amir Cohen/Reuters

The military has said it responded only to violent attacks aimed at troops and the border fence.

But video from the scene showed at least a handful of incidents in which people appear to have been shot either far from the border or while they were not actively rioting.

In one video that spread on social media, a young man was fatally shot from behind while running away from the border area carrying a tire.

The Israeli military accused Hamas of releasing videos that were either incomplete, edited or “completely fabricated.” It said troops had followed strict rules of engagement, and that protesters were putting themselves in “harm’s way” by operating in a dangerous area.

In the case of the man with the tire, the army said the video told only part of the story, and said he was a Hamas militant who had been involved in violence just moments before he was shot. It gave no additional evidence to support the claims.

In the interview, Lieberman said those who protested peacefully were not harmed, saying claims that peaceful protesters were harmed were “lies and inventions.” 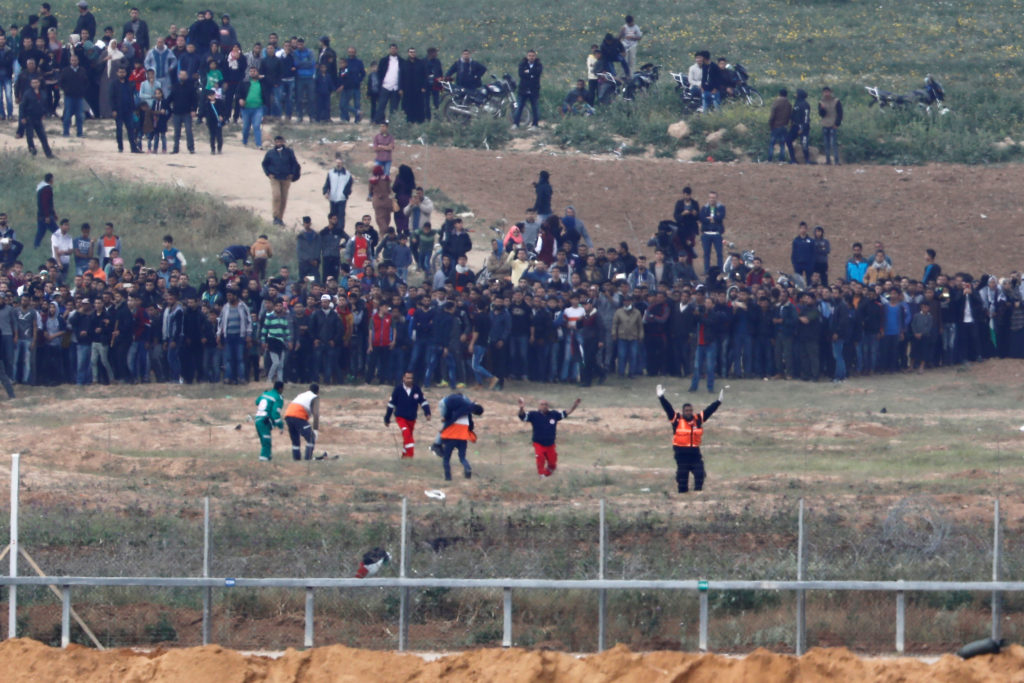 Palestinian paramedics evacuate an injured man on the Gaza side of the Israel-Gaza border, as seen from the Israeli side of the border, March 30, 2018. Photo by Amir Cohen/Reuters

“Whoever didn’t get close to the fence was not shot,” he said.

The Israeli military has said those killed by troops were men who were involved in violence and who belonged to Hamas and other militant factions. The army later released the names and ages of 10 of the dead, including what it said were eight members of Hamas and two from other militant groups. It also accuses Gaza health officials of exaggerating the number of wounded.

Four of the 15 dead were members of the Hamas military wing, Hamas said Saturday. The group said a fifth member who was not on the Health Ministry list was killed near the border, and that Israel has the body. It said another man is also missing in the border area.

The protests are to culminate in a large border march on May 15, the 70th anniversary of Israel’s founding. The date is mourned by Palestinians as their “nakba,” or catastrophe, when hundreds of thousands were uprooted in the 1948 Mideast war over Israel’s creation. Most of Gaza’s 2 million people are descendants of Palestinian refugees.

Gaza’s continued border closure has made it increasingly difficult for Hamas to govern. Life in the coastal strip has deteriorated further in recent months, with rising unemployment, grinding poverty and daily blackouts that last for hours.

Hamas has been further weakened by international isolation and financial pressure by the internationally recognized Palestinian Authority, along with three wars against Israel. It appears to be taking a gamble by using the protests to draw attention to Gaza without sparking another painful war.

Israel has warned that it will not allow the border to be breached. It also accuses Hamas of trying to use protests as a cover for planting explosives and staging attacks. On Saturday, Israel’s military said it will target militant groups inside Gaza if the border violence drags on.

It appears unlikely that large-scale protests will continue daily, with larger turnouts only expected after Friday noon prayers, the highlight of the Muslim religious week.

Inside Israel, most of the country has lined up solidly behind the army. Still, on Sunday, dozens of Israelis demonstrated in Tel Aviv against the violence, criticizing Israel for its response.

Left: People react as they evacuate deaf Palestinian Tahreer Abu Sabala, 17, who was shot and wounded in the head during clashes with Israeli troops, at Israel-Gaza border, in the southern Gaza Strip April 1, 2018. Photo by Ibraheem Abu Mustafa/Reuters