JERUSALEM — Israel’s defense minister abruptly resigned Wednesday in protest over a cease-fire reached with Gaza militants, in a move that rocked the Israeli political scene and seemed likely to bring about early elections.

Avigdor Lieberman said the cease-fire amounted to “surrender to terrorism” after two days of heavy fighting, and that he could no longer serve a government that endorsed it. Lieberman had demanded a far stronger Israeli response to the most intense round of rocket fire against Israel since a 50-day war in 2014, but appeared to have been overruled by Prime Minister Benjamin Netanyahu.

His resignation delivers a major blow to Netanyahu’s coalition government and sparked immediate calls for early elections. Lieberman said he hoped that in the coming days a date would be set for a new vote. The opposition parties joined his call.

The government still has a narrow one-seat majority in the Knesset without Lieberman’s nationalist Yisrael Beiteinu faction, but is unlikely to survive until the next elections, currently set for November 2019.

The party of another Netanyahu rival, Naftali Bennett, has already announced that if he is not appointed defense minister it will also quit the coalition — a move that would trigger early elections.

Given Bennett’s sometimes rocky relationship with Netanyahu, it is far from certain he will be given the powerful defense post. Yair Lapid, head of the opposition Yesh Atid Party, said “the countdown has begun” to the end of Netanyahu’s term in office. 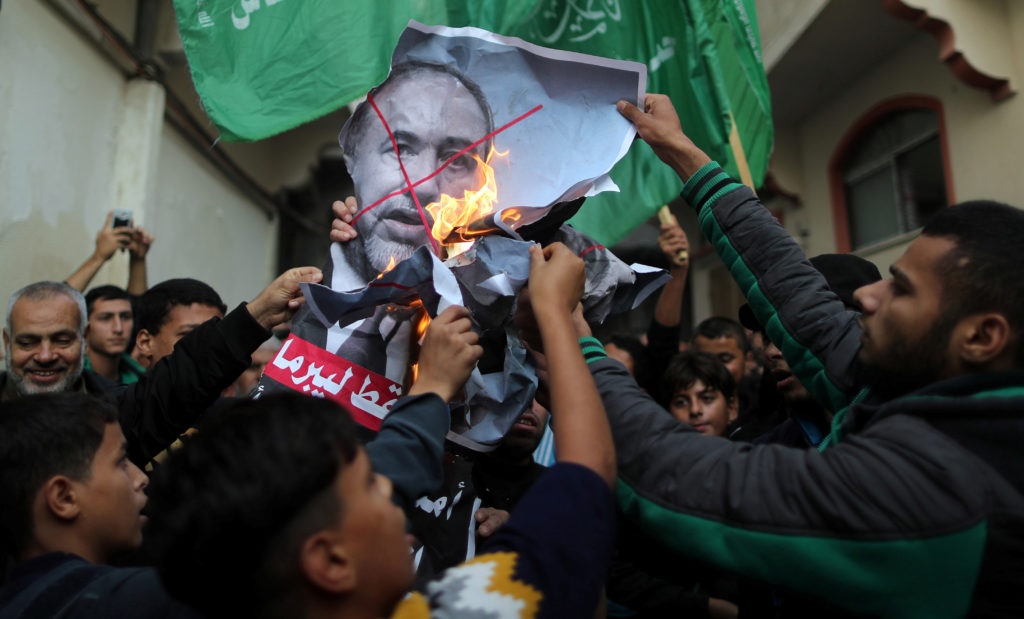 Lieberman’s resignation will take effect in 48 hours and Netanyahu will take over the defense portfolio on an interim basis. Netanyahu currently also serves as Israel’s foreign minister.

Netanyahu had come under heavy criticism for agreeing to the cease-fire, especially from his own political base and in rocket-battered towns in southern Israel that are typically strongholds of his ruling Likud Party.

Angry residents took to the street Tuesday chanting “Disgrace!” at what they saw as the government’s capitulation to violence and its inability to provide long-term security. Many have openly vowed to never vote Likud again.

“We are third-class citizens here in Sderot and the communities on the border with Gaza,” complained David Maimon, a local resident. “It’s a shame. Instead of helping us and letting us live quietly, they let us suffer.”

Recent months have seen sporadic rocket attacks as well as militant infiltration attempts and a wave of incendiary kites that have destroyed Israeli crops.

Netanyahu presented the decision to step back from a full-blown conflict as a unified one made by his Security Cabinet and based on the military’s recommendations. But Lieberman and Bennett later expressed reservations, saying they favored a stronger response.

Netanyahu defended his actions at a memorial ceremony in the Negev desert for Israel’s first prime minister, David Ben-Gurion.

“I see the big picture of Israeli security that I cannot share with the public,” he said. “Our enemies begged for a cease-fire and they know well why. I cannot detail our plans for the future. We will dictate the time and circumstances that are right for Israel and are right for the security of our people.”

Lieberman said the cease-fire deal, coupled with a decision to allow Qatar to deliver $15 million in aid to Gaza last week, were too much for him to bear.

“We are buying quiet in the short-term at the cost of severe damage to our security in the long-term,” he said in his resignation announcement. “The weakness we displayed also projects itself to other arenas.”

The Israel-Gaza frontier remained largely quiet overnight after the heavy fighting of recent days. But on Wednesday afternoon, Gaza’s fishermen’s union said a 20-year-old fisherman was fatally shot on the beach near the fence separating Gaza from Israel.

During this week’s fighting, Palestinian militants fired 460 rockets and mortars into Israel in a 24-hour period, while the Israeli military carried out airstrikes on 160 Gaza targets. Seven Palestinians, including five militants, were killed. In Israel, one person was killed in a rocket strike and three were critically wounded.

With air raid sirens wailing throughout southern Israel and the explosions of airstrikes thundering in Gaza, the two sides had appeared to be on the verge of their fourth war in a decade. Instead, Gaza’s Hamas rulers abruptly announced a cease-fire and Israel’s Security Cabinet ended a seven-hour discussion with a decision to hold its fire.

The latest round of violence was triggered by a botched Israeli raid on Sunday that left seven Palestinian militants and a senior Israeli military officer dead. Before the raid, Egyptian and U.N. mediators had made progress in reducing tensions.

In recent days, Israel had allowed fuel shipments to increase the power supply in Gaza, which suffers from frequent blackouts, and agreed to additional Qatari assistance to allow Hamas to pay the salaries of its thousands of government workers.

Hamas has staged near-weekly border protests since March in an effort to lift the Israeli-Egyptian blockade imposed after the Islamic militant group seized control of the coastal strip in 2007. The blockade has ravaged Gaza’s economy, and Israel refuses to lift it unless Hamas disarms, a demand rejected by militant group, which is pledged to Israel’s destruction.

Demonstrators each week have approach the border fence, throwing firebombs, grenades and burning tires at Israeli troops. Israeli snipers have killed about 170 people, most of them unarmed. Israel says it is defending its border against attackers, but it has come under heavy international criticism for shooting unarmed people.