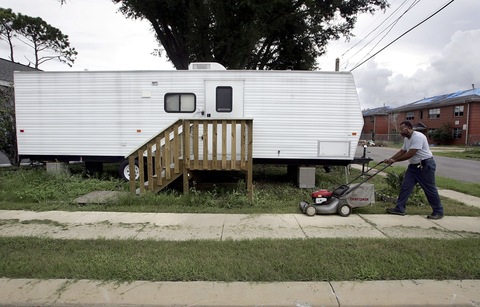 A resident of New Orleans’ Lower Ninth Ward mows his lawn in front of a FEMA trailer in 2006. (Photo by Justin Sullivan/Getty Images)

On the five-year anniversary of Hurricane Katrina, we’re looking back at some of our NewsHour coverage of the disaster and its aftermath. Among the stories we’ve explored: the struggles that New Orleans residents faced in finding housing after the storm and the ongoing controversy over the “toxic trailers” that some residents ended up living in. Here are some highlights of our coverage:

July 7, 2010: ‘Toxic Trailers’ Return to House Oil Workers
Some of the controversial FEMA trailers that the agency sold to private companies have returned to the Gulf to house oil disaster cleanup workers.

The companies that manufactured trailers for displaced New Orleans residents after Hurricane Katrina knew that the trailers contained unsafe levels of toxic formaldehyde, but failed to inform the public, congressional Democrats charged.

In the second in a series of reports on Gulf Coast housing problems, Betty Ann Bowser examines FEMA’s plans to find more permanent housing for hurricane evacuees who have spent months living in trailers.

The Centers for Disease Control and Prevention found high levels of formaldehyde in trailers issued by FEMA to house Hurricane Katrina victims. In the first of a series of reports, Betty Ann Bowser examines housing problems along the Gulf Coast.

After Hurricane Katrina ravaged the Gulf Coast, FEMA spent billions of dollars on trailers that served as temporary housing. As many of the trailers now sit vacant, the NewsHour reports on maintenance expenses and criticism of FEMA.

FEMA will use trailers to provide emergency housing for thousands of families displaced by Hurricane Katrina. But some local officials are unhappy with the solution.