Katrina 5 Years Later: The Monumental Tasks of Clean-up and Recovery 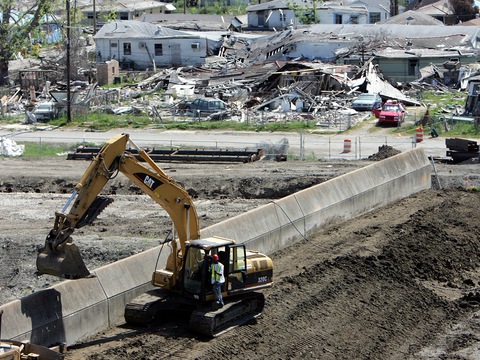 Upon the fifth anniversary of Hurricane Katrina’s landfall, the NewsHour is looking back at some our coverage of what people in New Orleans and the Gulf Coast have done to clean up from the storm and rebuild their homes, businesses and lives. Here are some highlights:

Nov. 8, 2005: Disagreement Over Whether New Orleans Is Safe
A science unit report looks at the environmental cleanup in New Orleans after Katrina. Federal and state officials are at odds with environmental groups over dangers posed by toxins in and around houses.

Feb. 9, 2006: Landlords, Musician Seek Normalcy in New Orleans
Five months after Hurricane Katrina, two reports from New Orleans track one family’s struggle over whether to move back and a prominent musician’s battle to retain the city’s jazz tradition.

March 20, 2006: In Mississippi, Signs of Recovery Amid Enormous Task of Rebuilding
The coastal town of Pass Christian has been struggling with the rebuilding process as it faces challenges raising revenue and keeping residents.

Aug. 25, 2006: Reminders of Katrina Linger on Mississippi Coast
One year after Hurricane Katrina hit the Gulf Coast of Mississippi, infrastructure remains in disarray and businesses are still suffering in parts of the state.

Jan. 2, 2009: Documentary Traces Family’s Struggle After Katrina
Herbert Gettridge struggled for years to rebuild his home in the lower Ninth Ward after Hurricane Katrina. Producer June Cross describes how she documented Gettridge’s story in “The Old Man and the Storm.”