Kerry arrived in the Laotian capital Sunday, with later stops planned for Cambodia and China, extending an around-the-world diplomatic mission that began with a heavy emphasis on the Middle East, particularly Iran and efforts to bring an end to Syria’s civil war.

Laos is the current head of the Association of Southeast Asian Nations, whose members are becoming more vocal in complaints about China’s growing assertiveness over competing claims in the South China Sea.

Next month, President Barack Obama will host the ASEAN leaders in California.

Before that summit, U.S. officials say, Kerry will make the case to the leader of the 10-nation bloc to present a unified stance in dealing with China on the disputes. They have intensified as China steps up construction of man-made islands and airstrips in contested areas.

The United States and governments with rival claims with China in the disputed region, including the Philippines and Vietnam, have expressed alarm over the Chinese construction. They say it raises tensions and threatens regional stability and could violate freedom of navigation and overflight.

But ASEAN unity has not always been possible because China wields great influence among some of its smaller neighbors, such as Cambodia. Cambodia held the ASEAN leadership spot in 2012, blocked the group from reaching consensus on the South China Sea issue and frequently has sided with China on the matter.

A senior U.S. State Department official accompanying Kerry in Asia said the U.S. had heard from regional leaders that problems related to Cambodia’s chairmanship “left a black mark on ASEAN and are not to be repeated.” The official said the U.S. believed that Laos would do a better job in balancing ASEAN interests with China.

Recent developments, including China’s movement of an oil rig into a disputed zone and warnings against overflight of what it claims to be its territory, have raised levels of concern in the region to a point where the official said it would be very difficult for an external power like China to manipulate individual ASEAN countries in a way that paralyzes the broader group. The official spoke on condition of anonymity because he was not authorized to discuss the details of Kerry’s visit publicly.

Kerry is only the second secretary of state to visit Laos since 1955; Hillary Clinton visited in 2012.

Obama will become the first U.S. president to visit the landlocked nation later this year. Laos has moved away from a communist system in the past two decades, but like its close ally Vietnam, it retains a one-party political system and its government has been criticized for being intolerant of dissent.

Laos was targeted heavily by U.S. bombing during the Vietnam War and still has large amounts of unexploded ordnance littering its countryside. The U.S. has stepped up efforts to help clear Laos of those bombs and Kerry is expected to commit to expanding and upgrading such programs with details to be announced when Obama visits later in 2016, the U.S. official said. 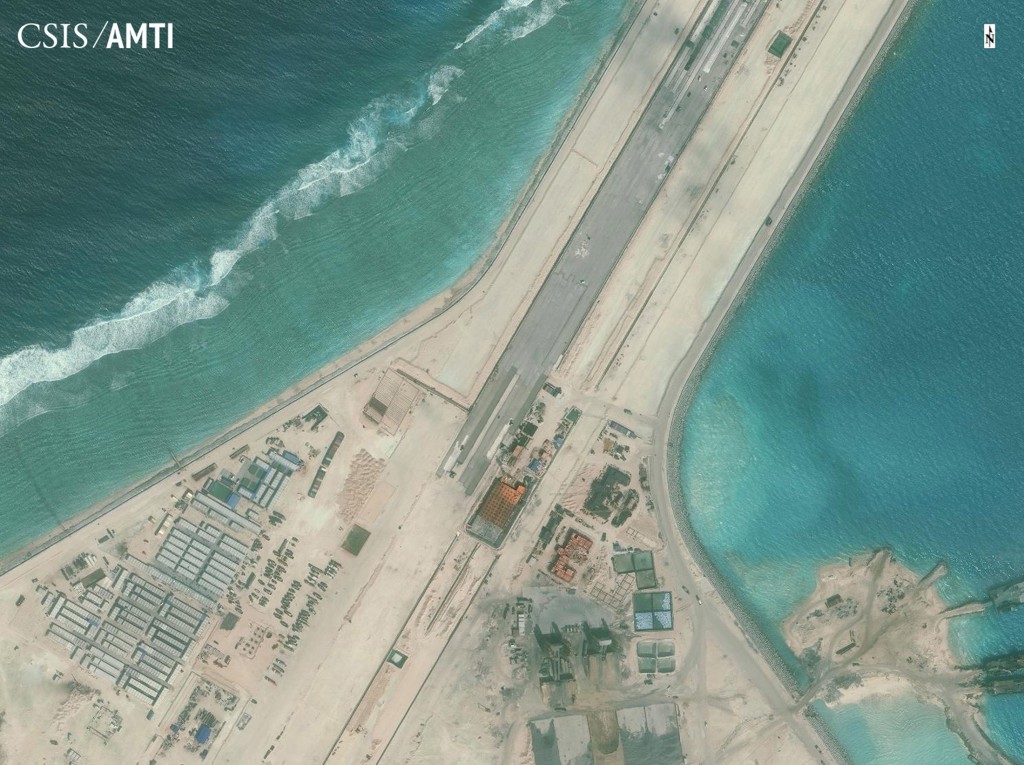 China plans to invite private investment to build infrastructure on islands it controls in the disputed South China Sea and will start regular flights to one of them this year.  CSIS Asia Maritime Transparency via Reuters

In Cambodia, Kerry is expected to note the country’s strong economic growth but also raise concerns with longtime authoritarian Prime Minister Hun Sen about human rights and political freedoms. Kerry plans to meet representatives of Cambodia’s opposition, led by a man who has been in self-imposed exile since November, when an order for his arrest was issued on an old conviction for defaming Cambodia’s foreign minister.

Kerry will wrap up his Asia tour in Beijing, where he will renew concerns about China’s aggressive behavior in the South China Sea and call for Chinese leaders to take more steps to press North Korea on its nuclear program.

Since North Korea’s nuclear test earlier this month, U.S. officials have urged China to use its leverage to demand that the North Korean leadership end its nuclear weapons program and testing and return to six-nation talks aimed at denuclearizing the Korean peninsula.

The senior U.S. official said the U.S. believes that the pressure China has exerted on North Korea so far has not been enough to change the calculus of North Korea’s young leader, Kim Jun Un, and that it is important for China to join the U.S., South Korea and Japan in presenting a united front.

Left: U.S. Secretary of State John Kerry walks into the Landmark Hotel upon arrival in Vientiane, Laos, Jan. 24, 2016 during the beginning of an Asian tour. He hopes to push for en end to simmering maritime disputes and refocus China's attention on North Korea's nuclear program. Photo Jacquelyn Martin/Reuters