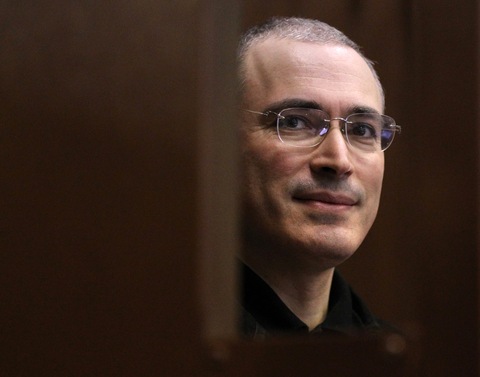 One of Russia’s richest men, Mikhail Khodorkovsky, has been in prison for nearly a decade for fraud and tax evasion. On Monday, Russian President Dmitry Medvedev directed the prosecutor general to review the legality of the guilty verdicts brought against the former head of the Russian oil firm Yukos, raising a comparison to the case of one of Russia’s best known human rights activists, Andrei Sakharov.

Khodorkovsky was once Russia’s wealthiest man and the 16th wealthiest person in the world, according to Forbes. His arrest in 2003 came after he made public intentions to challenge then-President Vladimir Putin in the political arena.

Khodorkovsky would have been let out of jail in 2011 had he not been charged with stealing 265 million barrels of oil from his own company, Yukos, in 2010. Western and domestic critics, including the U.S. State Department, said that both trials lacked due process and that the charges against him were politically motivated.

The prosecutor general of the case has until April 1 to complete a review of cases against Khodorkovsky and business partner Platon Lebedev.

Any sort of movement to release Khodorkovsky, who some in the government have made into a political enemy, “would be very similar to when in December of 1986, Mikhail Gorbachev returned [Andrei] Sakharov from his exile in Gorky,” said Leon Aron, resident scholar and director of Russian studies at the American Enterprise Institute.

Sakharov was a Soviet nuclear physicist who was a key developer of Russia’s thermonuclear weapons. He later became an advocate for nuclear nonproliferation and for civil liberties in the Soviet Union. He was sent to internal exile in Gorky after protesting the Soviet invasion of Afghanistan in 1979.

“Of course I’m not comparing Khodorkovsky to Sakharov … but the point is that the regime has made them both into the symbols of resistance. Neither of them ever repented, or ever asked for reprieve. Actually, Khodorkovsky has been refusing to ask for any kind of presidential pardon, insisting that he was not guilty,” Aron said.

To release Khodorkovsky would signal a change of political course, and possibly even more so, “It will indicate weakness, it will indicate the desire to placate the opposition,” he said.

Medvedev announced his decision to review Khodorkovsky’s case after meeting with protesters. The April 1 deadline for the general prosecutor’s review comes one month before Putin takes office.

“Another parallel between Sakharov and Khodorkovsky is that … neither of them made any secret of their desire to, upon release, not to slink away, go abroad or anything like that, but to continue their work on the democratization or the liberalization of the regime,” said Aron. In Khodorkovsky’s case, he likely would continue working to create a true multi-party democracy in Russia, he said.

The small band of advocates for Khodorkovsky and Lebedev benefited from the strong anti-Putin movement that sprang from December parliamentary elections, which many deemed rigged. Those protesters took on their cause. Even another presidential candidate got in on the action. Billionaire Mikhail Prokhorov, who ran unsuccessfully in the March 4 presidential elections, “has openly said that he would pardon Khodorkovsky,” Aron said.