“North Korea would like to remain patient, but it hopes the relevant party will meet halfway with North Korea to explore resolution plans that accommodate each other’s reasonable concerns,” he said, according to Chinese state broadcaster CCTV.

Xi’s trip to North Korea, the first by a Chinese president in 14 years, raises the possibility that China could help break a monthslong impasse in talks between the U.S. and North Korea over the North’s nuclear weapons.

The summit comes as both countries are locked in separate disputes with the United States.

Describing the issue as “highly complex and sensitive,” Xi said his government is willing to play a constructive role in the denuclearization of the Korean Peninsula.

“The international community expects the U.S. and North Korea to continue to talk and achieve results,” he said, according to CCTV.

The summit comes as both countries are locked in separate disputes with the United States — China over trade and North Korea over its nuclear weapons.

With Xi due to meet President Donald Trump next week in Japan, analysts say Kim may ask the Chinese leader to pass on a message that could revive the talks with the U.S.

Xi’s two-day state visit to North Korea, announced just three days ago, began with the synchronized pomp of all major events in the country.

About 10,000 cheering people and a 21-gun salute greeted Xi and senior Chinese officials at an arrival ceremony at Pyongyang’s airport.

The CCTV evening news showed Xi and his wife Peng Liyuan waving to the crowd after emerging from their Air China plane, then being greeted by Kim and his wife, Ri Sol Ju before receiving flowers and watching goose-stepping troops march by.

The crowd stood in tight formations, waving flowers and chanting slogans to welcome Xi. Other people lined the roads and cheered from overpasses as Xi’s motorcade traveled to central Pyongyang, where he joined Kim in an open-top vehicle. 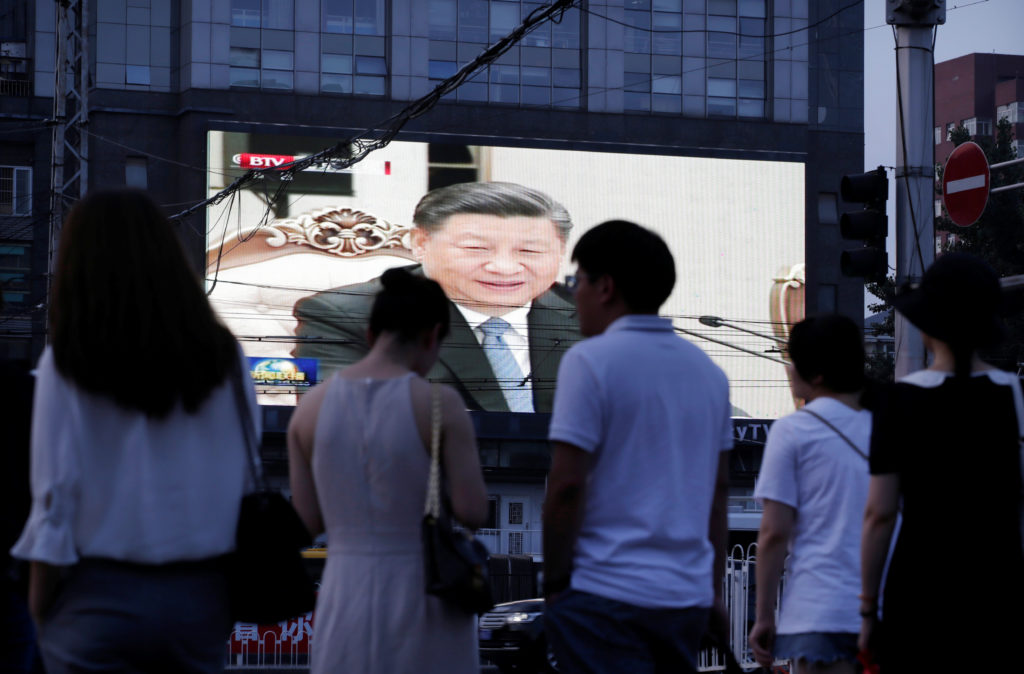 Standing in the car, they waved to crowds as they rode to the square where the embalmed bodies of Kim’s grandfather and father, the first two leaders of North Korea, lie in state.

As of Thursday evening, North Korean media had yet to report on Xi’s arrival.

Nuclear talks between the U.S. and North Korea broke down after a second summit between Kim and Trump in February in Vietnam ended in failure.

A series of North Korean ballistic missile and nuclear tests in 2016 and 2017 alarmed the U.S., its Asian allies, Japan and South Korea, and even China. Last year, Kim turned to diplomacy, including his first meeting with Trump in Singapore.

The talks with the U.S. have reached an impasse over a fundamental difference in approach.

The U.S. is demanding that North Korea abandon its nuclear weapons entirely before international sanctions are lifted. North Korea is seeking a step-by-step approach in which moves toward denuclearization are matched by concessions from the U.S., notably a relaxation of the sanctions.

“Over more than a year, the North Korean side has taken many positive measures to avoid escalation of the situation and manage and control the peninsular situation, but it hasn’t received an active response from the relevant party,” Kim told Xi on Thursday, according to CCTV.

Xi is expected to endorse North Korea’s calls for an incremental disarmament process.

A commentary in China’s official Xinhua news agency said China could play a unique role in breaking the cycle of mistrust between North Korea and the U.S, but that both sides “need to have reasonable expectations and refrain from imposing unilateral and unrealistic demands.”

A former North Korean diplomat who defected in 2016 said he thinks Kim wants to give Xi a message to deliver to Trump when the two meet at the upcoming G-20 summit in Japan.

Thae Yong Ho said Kim may offer to abandon some of his nuclear facilities in a bid to set up a third summit with the U.S. president. But he cautioned that such a move would be only to buy time and not to denuclearize fully, as the U.S. is demanding.

“The main purpose for the Kim Jong Un regime in negotiating is to keep North Korea as a new nuclear state in this region, there is no doubt about that,” he said at a news conference in Tokyo, where he is promoting the Japanese translation of his book, “Password From the Third Floor,” an inside look at North Korean diplomacy and the Kim regime.

Kim met Xi four times in China as the talks with both the U.S. and South Korea got underway. A banner at the airport welcome ceremony read, “Long Live with Unbreakable Friendship and Unity Formed by Blood.”

The nations fought together in the 1950-53 Korean War against the United States, South Korea and their allies. China welcomed Kim’s announcement last year that he was shifting the country’s focus from nuclear weapons to economic development.