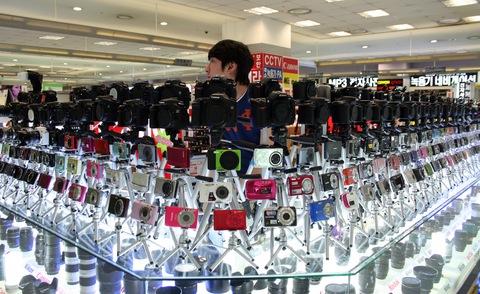 One of the many camera counters at I-Park mall in Seoul. Photo by Larisa Epatko

SEOUL, South Korea | In search of a memory card for our camera, we stumbled into the I-Park mall, a dazzling cornucopia of electronic gear. There are eight floors of the stuff: from still cameras, video cameras and smartphones to household appliances and the latest in high-tech Korean toilet seats (don’t ask).

If the business of Korea — which has transformed itself from a war-torn agricultural backwater to the world’s 12th largest economy in little more than 50 years — is business, then the I-Park mall is its consumer epicenter. Or at least one of them. “How worried are you by the latest tensions with North Korea?,” I asked a vendor as he rang up my purchase. “I don’t worry,” he said. “Our governments, they worry. I work.”

We arrived in Seoul on Tuesday as South Korea and its nuclear-armed northern neighbor appear closer to serious military conflict than at any time since the Korean War. That war cost the lives of 36,500 Americans and an estimated 415,000 South Korean soldiers and civilians, but it ended in 1953 with an armistice rather than a full peace treaty, leaving the two Koreas technically in a state of war. 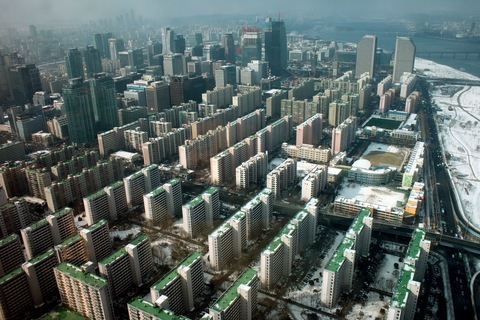 High-rise buildings lined up in rows in this bird’s eye view of Seoul. Photo by Larisa Epatko

Now new provocations by the North Koreans — torpedoing a South Korean warship last March, killing 46 sailors, and bombarding a South Korean island in November, killing four — have raised the prospect that full-scale military engagement could break out. That concern has been heightened because unlike his predecessors, current South Korean President Lee Myung-bak hasn’t turned the other cheek. Instead, he’s toughened the rules of military engagement and vowed next time the North strikes, the South will respond in kind.

“One-off provocations have been part of North Korea’s toolkit for decades,” a senior administration official told me before we left. “The difference is, South Korea’s mindset has changed. So the risks of escalation, even if unintended, are much greater.” With 28,500 troops here and an agreement that gives joint command to the U.S. if war were to break out, Americans clearly have a stake in making sure it doesn’t. So we’ve come to the Korean peninsula to assess how close the two sides are to war, and how the South Korean people feel about all this.

At first blush, South Koreans seem to be going about their daily lives. And very intense lives they are. Koreans work more hours per year than citizens of any other country. The impulse-buy magazine rack at the checkout line at the Target-modeled discounter E-Mart featured not star-spying tabloids but paperbacks with titles like “The Science of Getting Rich,” “Rich: Ways to Create Wealth,” “Success Secret No. 77” and, inexplicably, “Persuade Like Obama.” 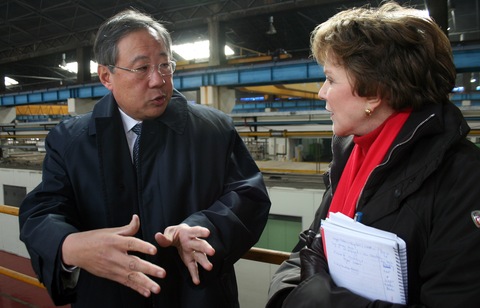 Focused on getting themselves and their country ahead, many South Koreans echo the insouciance of the I-Park mall vendor. We spent part of the day with Roy Ryu, chairman and CEO of the $3 billion-a-year Poongsan Corp., touring the metal-products factory his father had built on rice paddies in the late 60’s near Inchon — uncomfortably close to the border with North Korea, and its estimated 30,000-40,000 artillery pieces pointed at the South. As the country’s No. 1 defense contractor, Ryu’s company manufactured the howitzer shells that the South fired back at North Korea in response to its artillery attack on Yeonpyeong Island six weeks ago. Though his company might well profit from full-blown conflict, he insists the situation won’t escalate to war because “the U.S., China and Japan all want to make sure it doesn’t.” Ryu paused and took a breath. “But it’s unpredictable,” he conceded. “So we have to be ready.”

The unpredictability of Pyongyang, that’s the rub. We ended our day with a prominent North Korean defector who, as a young man, used to pal around with the eldest son of the current ruler, Kim Jong-Il. “Do South Koreans understand the North?,” I asked. He shook his head. “No,” he said. “Not at all.” At the end of the day, South Korea’s fate — not to mention U.S. interests and lives — are subject to the opaque calculations of what a senior Obama aide conceded is “the most unknowable place on Earth.”

Margaret Warner and a NewsHour team are reporting in South Korea for three weeks. What’s the main question you would like us to ask South Koreans while we’re there? Enter your ideas in the below comments section.