Freelance British photojournalist, John Cantlie — abducted in 2012 along with U.S. journalist James Foley — appears in the Islamic State’s latest video as a foreign correspondent reporting from the Syrian town of Kobani, the New York Times reported. 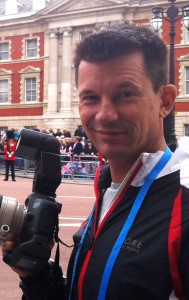 A June 2012 file photo of British photojournalist John Cantlie, who was captured in Syria by jihadist militants in November 2012. Photo via Getty Images

The video was released late Monday evening, but the timing and authenticity of the video have not been verified. The British Foreign Office said they are in the process of analyzing the content.

The five-and-a-half-minute video is titled “Inside Ayn-Al-Islam” and begins with an aerial view of the embattled town through an ISIS drone, with artillery gunshots going off in the background. The group is claiming that they are close to capturing the Syrian town located near the Turkish border.

And despite Kobani being known as Ayn-Al-Arab in Arabic, the terrorist group refers to the Syrian town as Ain-Al-Islam.

Cantlie then appears on the screen, dressed in all black and introduces himself.

“Hello, I’m John Cantlie, and today we’re in the city of Kobani on the Syrian-Turkish border. That is in fact Turkey right behind me,” he says. “We are here in the heart of the so-called PKK safe zone, which is now controlled entirely by the Islamic State.”

Through the duration of the propaganda video message, Cantlie goes on to mock and denounce the progress made by U.S.-led airstrikes and Kurdish force. He also discredits the reports of the withdrawal of IS fighters from several neighborhoods in Kobani by Western media that include the International Business Times and the BBC, among others.

“We know we’ve killed several hundred of them, said John Kirby, the Pentagon official,” Cantlie quotes the Rear admiral. “The Islamic State is retreating from the Syrian city of Kobani said the BBC on October 17,” he says.

Referring to IS fighters as Mujahideen, Cantlie says they are “mopping up now, street to street, and building to building.”

This isn’t Cantlie’s first appearance in an IS propaganda video. The militant group has used the British freelance photojournalist in several other videos, often featured as the group’s spokesman.